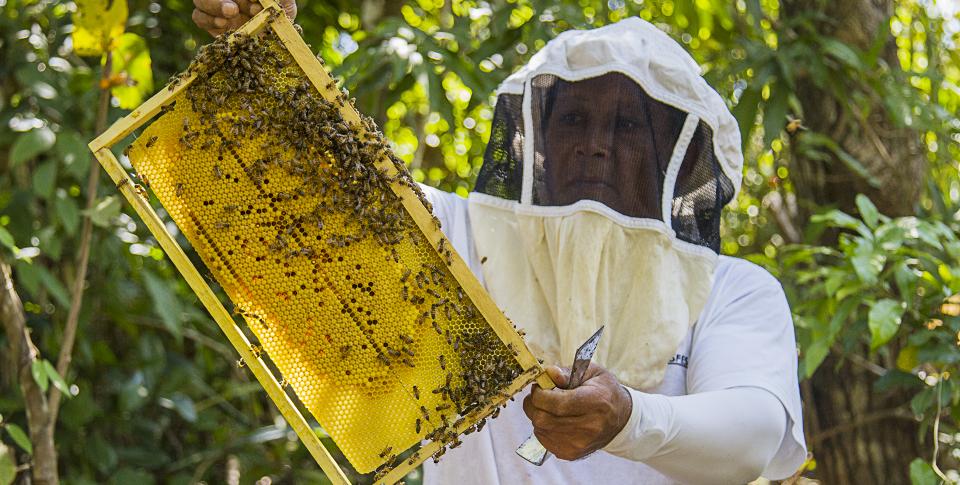 QCOSTARICA (By Henry Morales Navarro, Vozdeguanacaste) They are small insects that are easily overlooked. However, bees are responsible for the survival of many plant and animal species and in Guanacaste, they find their paradise.

These small insects like tropical dry forest climates due to the characteristics and conditions that they offer. At least that’s how Alfredo Herrera, beekeeping specialist, explains it.

“Guanacaste is predominantly tropical dry forest, which is characterized by the loss of leaves in the summertime. During this stage, the plants begin to flower, with pollen and nectar as a strategy to attract insects to pollinate flowers and thus secure (perpetuating) the species. Since a large diversity of plants require this same mechanism, the possibilities of producing honey are many,” Herrera said.

Herrera explained that in tropical areas, the opposite occurs, since the plants do not need these survival mechanisms because they have an abundant amount of water and they use different mechanisms for the effect of pollination.

However, the expert sees an imminent threat lurking against bees and the activity of beekeeping in Guanacaste, but especially in Hojancha, where he was devoted to the production of honey for years.

“The introduction of non-native plant species like teak and melina, which don’t contribute anything to bees or to the fauna and flora, caused a deterioration of the ecosystem. Moreover, since the mountainous areas of Guanacaste are suited for forestry and not cattle, governments have had to stimulate the livestock industry by introducing better pasture grass, with the consequent result of the disappearance of native grass species. Hojancha went from being a traditional canton and the birthplace of beekeeping to it becoming an activity of a just a few,” Herrera said.

Another threat is the presence of a dangerous mite that sucks the blood-hemolymph of bees, diluting their defenses and weakening them to the point of death. Combating this mite is complicated because it has become immune to the chemicals so government assistance is needed to combat the plague.

According to Herrera, two decades ago, five hives could produce a barrel of honey, while currently it takes 20 hives to produce the same amount, so the activity has declined by 300%.

Facundo Mendoza, who shares the work with Alfredo Herrera and Jose Miguel Hidalgo, has more than 200 hives, which produce eight to 10 barrels annually in the apiary (honeybee farm) in Pilangosta, Hojancha.

“Honey production starts in November and ends in April. Later when the rains start, a recess period begins. During rainy season, the bees produce a honey that we should not eat, that is exclusively for the hives’ reserves,” Mendoza indicated.

Mendoza said that he has been working as a beekeeper since he was 20 and he knows that working with bees is an art that requires certain skills and patience since the hives have to be rotated and moved, always looking for appropriate places like dense mountains.

To Mendoza, the local market is not very advantageous since it suffers from competition from supermarkets, whose honeys are not 100% natural, so they charge up to 50% less than the original value of the honey produced by apiaries.

When you see a jar of honey, think about what is behind it— an enormous amount of hierarchies, threats, work and many bees taking advantage of the summer. 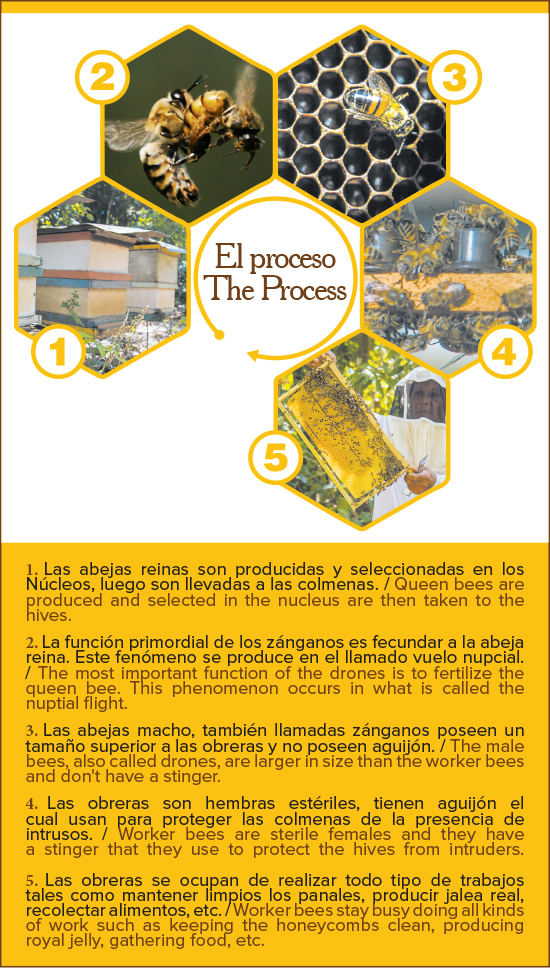