The game between the United States and Costa Rica is tomorrow and despite the heckling at the airport and the fact that the U.S. team has never won in Costa Rica, there is no reason for the Americans to give up hope. And Costa Rica’s national stadium, built and donated to the country by the Chinese, may give the U.S. a chance at qualifying for the World Cup before the weekend.

Originally the Costa Ricans (Ticos) wanted the game be played in the loud and imposing Ricardo Saprissa stadium, nicknamed “the Monster’s Cave“, a venue that has fans on top of the action.

Instead the 35.000 seat national stadium boasts level sight-lines for the fans and a lovely track surrounding the field, placing even more distance between the players and the fans, this dampening the noise that will be emitted by what is expected a noisy an ruckus bunch. The high-tech artificial turf installed two years ago (the stadium’s opening in 2011) is nothing like the pockmarked artificial turf of the Saprissa. 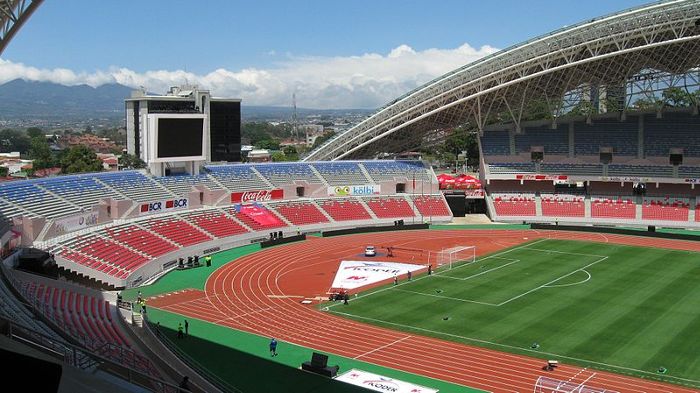 What this all means for the U.S. team, the change of venue from the Saprissa to the Nacional, is the Tico’s loss of home field advantage.

The Federación Costarricense de Fútbol (Fedefutbol) – Costa Rican Soccer Federation, angered that the U.S. made them play in the snow back in March, wanted the match in Saprissa.

Eduardo Li, president of the Fedefutbol, had some particularly strong rhetoric: “The voice of the people is the voice of God, and if people want us to play there, we will play in the Saprissa against the United States.”

But they had to abandon that plan when it became clear that FIFA wouldn’t approve of a match held in the rundown palace of futbol. See, there’s this beautiful new sterile stadium just down the road, and it’s open for business.

The U.S. coach, Jürgen Klinsmann, for one, feels OK with how it all went down.

“We have a lot of respect for Costa Rica and it’s important that the players always respect their opponent and know what to expect. They can expect a very intense game, a high energy game, but I think we have the quality and the mindset to be confident enough to go there for three points. This is what we’re trying to build…. Hopefully we can take that mindset down to San José and win there for the first time ever in World Cup Qualifying.”

Thanks to Oscar Arias (who happens to live just a few blocks from the National Stadium) the Chinese, that United States team might actually have a shot at qualifying.

In 2007, Don Oscar, as president of  Costa Rica established diplomatic relations with China, so Costa Rica got a shiny new toy and China got itself a bit of influence.

Are you thinking about becoming a casino dealer? If you’re a Hungarian citizen, we’ll tell you more about what you need to know. You...
Nicaragua

QCOSTARICA - What had been a good tool as a payment mechanism for sellers and businesses, the Ministry of Finance (Treasury) has in its...
Cine (Movies)