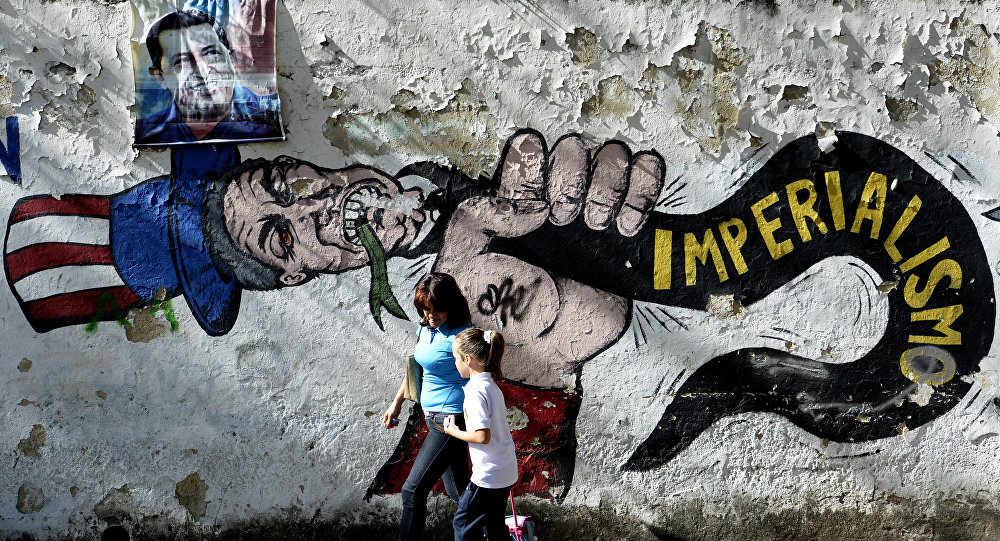 On Wednesday, the Trump administration officially recognized opposition leader Juan Guaido as the ‘legitimate’ president of Venezuela and dismissed Nicolas Maduro’s inauguration. Maduro, on the other hand, hit back, saying that the U.S. has been trying to oust him and were planning a military coup against him.

President Donald Trump, who once refused to “rule out a military option” in Venezuela, has been consistent with a hard-line approach towards Venezuela under Nicolas Maduro.

What led to the US-Venezuela escalation of tensions?

The U.S. Reacts to Maduro’s Re-Election

Following Nicolas Maduro’s re-election for a second six-year term on 20 May 2018, both U.S. Secretary of State Mike Pompeo and Vice President Mike Pence slammed it as a “sham election”.

“Venezuela’s election was a sham ¬- neither free nor fair. The illegitimate result of this fake process is a further blow to the proud democratic tradition of Venezuela”, Pence said in a statement.

Watching #Venezuela today. Sham elections change nothing. We need Venezuelan people running this country…a nation with so much to offer the world. We call on the government to free #JoshHolt

U.S. President Donald Trump, for his part, called for Maduro to “restore democracy, hold free and fair elections, release all political prisoners immediately and unconditionally, and end the repression and economic deprivation of the Venezuelan people”.

In order to choke off Venezuela’s financing, the Trump administration slapped another set of sanctions on Venezuela, having issued an executive order restricting its ability to liquidate state assets and debt in the U.S.

Venezuela’s foreign minister dismissed the restrictions as illegal, saying they were “madness, barbaric and in absolute contradiction to international law”.

Crisis-Hit Venezuela is a Threat to US Security – Pence

In June 2018, Vice President Pence said that the crisis in Venezuela jeopardized U.S. security and countries in the region and that Washington would not stand “idly by while Venezuela collapses”.

“It is remarkable to think that, once one of the most vibrant countries and economies in the Western hemisphere, Venezuela is now essentially a failed state and the Venezuelan people are suffering”.

War of Words in Wake of Maduro Assassination Attempt

During a military event on August 4, 2018, Maduro survived what government officials described as an assassination attempt. Several drones detonated close to the presidential podium during Maduro’s address, and the explosions were later claimed by an obscure Caracas paramilitary group describing themselves as the “National Movement of Soldiers in T-shirts”.

While Maduro called on Trump to reveal the perpetrators’ links…

“I want the U.S. government and the new government of Colombia to unveil all the links of the accomplices in the attack, residing in the state of Florida, on the territory of the United States and Colombia. With faith in the goodwill of the government of President Donald Trump, and that he will not allow the killing of civil and military leaders of countries like Venezuela to be plotted on U.S. territory”.

…U.S. National Security Advisor John Bolton was quick to reassure the international community that Washington was not involved in the blasts. He also suggested that Maduro’s government was behind the explosions as part of alleged efforts to consolidate power and clamp down on the opposition, pointing to the country’s wrecked economy and subsequent unrest.

“It could be a lot of things, from a pretext set up by the Maduro regime itself to something else. If the government of Venezuela has hard information that they want to present to us that would show a potential violation of U.S. criminal law, we will take a serious look at it”.

Two months later, Maduro claimed that the U.S. had instructed Colombia to assassinate him:

“I am saying this to the entire world — the order to kill Maduro was given to the [Colombian] government in Bogota from the White House that wants to kill me”.

In December 2018, he also lashed out at Bolton, in particular, claiming that the White House adviser had spearheaded the plan:

“John Bolton leads the plan to unleash violence and conduct a coup to introduce a transitional government. Bolton is preparing a plan of my assassination. He is training, in various places, mercenary, and paramilitary units’ forces jointly with Colombia, whose president Ivan Duque is an accomplice of this plan”.

In September last, Washington targeted Venezuela with another round of sanction on Maduro’s wife and six officials, his “inner circle”, including the vice president and defense minister. The restrictive measures also included blocking a US$20 million private jet identified as belonging to the front-man of a senior official.

Delivering his speech to the UN General Assembly, President Trump called on “the nations gathered here to join us in calling for the restoration of democracy in Venezuela”.

“Today, socialism has bankrupted the oil-rich nation and driven its people into abject poverty”, he said.

Maduro, in turn, has consistently said he Venezuela is the victim of an “economic war” led by the United States and its allies, and that the U.S. is orchestrating attempts to oust him as part of a broader offensive against Latin American leaders challenging US hegemony.

After Maduro was sworn in earlier this month, Pompeo slammed the inauguration as “illegitimate”…

“The Maduro regime is illegitimate and the United States will continue… to work diligently to restore a real democracy in that country. We are very hopeful that we can be a force for good to allow the region to come together to deliver that”.

…while Bolton said that the May 2018 election was not “free, fair or credible:

“The United States does not recognize Venezuelan dictator Nicolas Maduro’s illegitimate claim to power. His ‘election’ in May 2018 was viewed internationally as not free, fair or credible. We hold the illegitimate Maduro regime directly responsible for the safety of all Venezuelans who cry out demanding to freely choose their leaders. We will continue to use the full weight of United States economic and diplomatic power to press for the restoration of a Venezuelan democracy that reverses the current constitutional crisis”.

As Guaido declared himself interim president of Venezuela, both Trump and Vice President Pence recognized him as the “legitimate” president of the country.

On top of that, U.S. authorities have been urging Maduro to step aside in favor of Guaido, “reflecting the will of the Venezuelan people”.

Maduro, on the other hand, didn’t mince words when blasting Guaido as “an American agent”, and accused the United States of attempting to stage a coup against him.

“He is a puppet, an American agent, created by… the US intelligence agencies, it is them who control him”.

The Venezuelan president also announced that Venezuela was breaking diplomatic and political relations with the United States, and gave U.S. diplomats 72 hours to leave the country.