“I Would Have Not Taken The Decision To Resign”, Says Oscar Arias

Former president Oscar Arias says he was as surprised as everyone else with Wednesday’s announcement by Johnny Araya to withdraw from the presidential campaign. 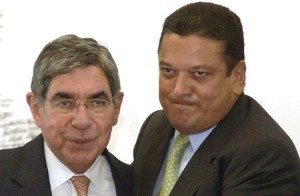 wo-time former president and Nobel Peace Price Winner told Amelia Rueda, that during the meeting that took place on Monday (March 3) between he and Johnny, the possibility of Araya to withdraw was never discussed.

What Arias says he told Don Johnny was that “the die was cast” and that it was “impossible” to reverse the trend by PAC candidate, Luis Guillermo Solís.

Arias says Araya felt that the “bad government” of Laura Chinchilla was the cause of electorate shit.

On the decision by Araya, Arias said he would have not taken the decision to resign, because “when you start the game you have to finish it”.

Arias said he will be casting his vote on Sunday, April 6.

QCOSTARICA - What had been a good tool as a payment mechanism for sellers and businesses, the Ministry of Finance (Treasury) has in its...
Nicaragua

QCOSTARICA - The United States presented on Monday a plan to share 55 million doses of coronavirus vaccines worldwide, with approximately 75% of the...
Pura Vida

QCOSTARICA - The judicial file of the Cochinilla Case, on alleged corruption in road works, exposes how three companies would have covered up the...
Redaqted