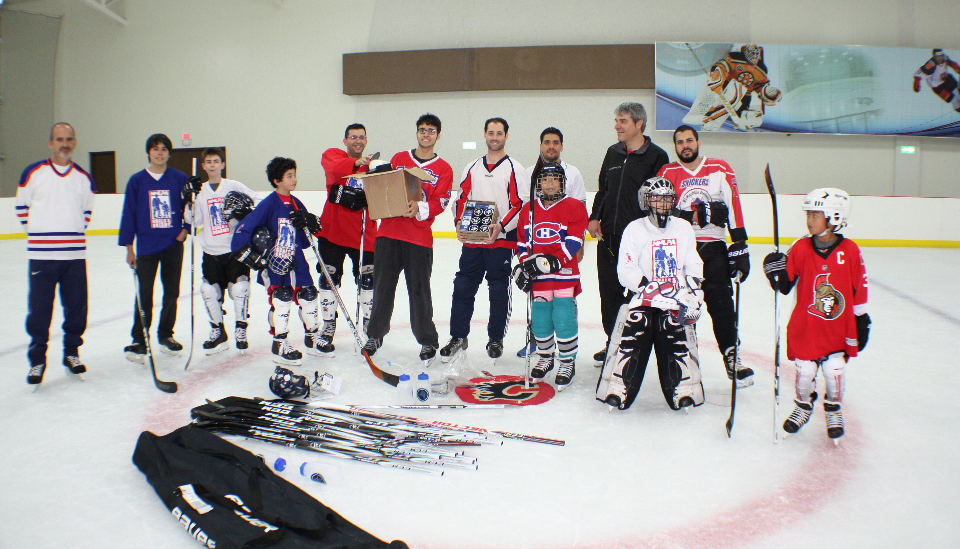 PURA EVENTS COSTA RICA – Ice hockey has been played in Costa Rica since 1996 at the Castillo Country Club which is located in the highlands above the town of San Rafael de Heredia.

Though the program is small, it has been steadily growing and last year it receive a big boost when the Castillo`s ice surface was doubled in size. Hockey is an expensive sport and one of the biggest challenges the program faces is properly outfitting its players.

The following blog tells the story of a California man`s unique quest to assist the Castillo Knights hockey program.

When I first read about ice hockey in Central America I thought, “Wow, that’s amazing.” I was so impressed by the program overcoming the odds and upon reading that the rink where they play and practice had just been expanded, I decided to write to see if I could help. Because of my experience as a board member of a non-profit in my home of Los Angeles, California and being a hockey player and fan myself, it just seemed natural to want to help. After emailing with Calgary native Bruce Callow, one of the coaches and founder of the program, I was able to get an idea of what the team needed.

Fortunately, the owner of a local hockey store (Discount Hockey in Los Angeles, California) and his sons play on a team with me and when I proposed the idea to help this program in Costa Rica, Richard and Chris, the owner and manager, were more than happy to help.

I live in Los Angeles and although I did not grow up playing ice hockey, I grew up watching it on TV and have been a long-time fan. About 4 years ago I decided to start playing ice hockey and I have more than doubled my love of the sport. It has really been such a positive influence in multiple areas of my life, as competitive sports generally are.

As I emailed Bruce, my desire to help his program grew, as did the list of useful equipment the Castillo Knights were in need of. Using Indiegogo, an online fundraising platform, we were able to get donations of sticks, hockey tape and other essentials from family, friends and our teammates here in Los Angeles, raising over $1,500 for the program in just 4 days. Because of the amount of gear, and at Bruce’s recommendation, I decided to make a personal trip down to Costa Rica to deliver the donated goods and skate with the kids in the program.

After my first flight was delayed causing me to miss my connection to Costa Rica and my flight the next day was almost canceled because of volcanic activity, the gear and I finally made it to Costa Rica. What an experience it has been! The coaching staff is great, the kids are a ton of fun and really seem to be enjoying this sport that is certainly not common to Central America. The rink at the Castillo Country Club is quite nice and the ice is good quality. You can tell they are proud of it, especially since it’s the only ice skating rink in all of Central America and the Caribbean.

Overall this experience has been one of a kind and one I will never forget. It’s truly great to see such an amazing sport growing so far from home. Like soccer, it’s a sport that requires great finesse, not only in skating skills, but in puck control and passing and shooting. But there is also a very physical and high tempo aspect to the sport that makes it so exhilarating to watch.

I am glad that the Castillo Country Club had the vision to be the first establishment to see the value in introducing this sport to Costa Ricans and I know this program will be a great benefit to all involved. It takes a lot of courage to be the leader in an untried endeavor and I really hope their support continues to increase.

This article originally appeared on Puraeventscostarica.com