QCOSTARICA – An unlikely alliance has been formed between the Ministry of Transport (MOPT), taxi drivers and porteadores (informal taxi), to fight the arrival of Uber in Costa Rica.

The taxi drivers and porteadores see the arrival of Uber as unfair competition, while the MOPT says it is yet another type of illegal service. Joining in are also bus drivers.

The deputy minister of Transport, Sebastian Urbina, warns that paid public transport that is not registered with the Consejo de Transporte Publica (CTP) is subject to a ¢103,000 colones fine and/or the confiscation of license plates.

Urbina rejects the argument by Uber officials that say the service is private.

“Private transport does not exist in Costa Rica; it was removed four years ago when changes were made to the Commercial Code (Código de Comercio) when dealing with the porteadores,” said the deputy minister.

Meanwhile, Uber has said to have begun operations in the country. Although it has yet to offer any service to consumers, on Monday last it announced a general manager of operations, Humberto Pacheco Ortíz and on Thursday began to take applications from potential drivers.

The Uber webpage for Costa Rica allows anyone interested to become a driver for Uber to submit their information, including photos and copies of drivers license, vehicle registration, insurance, etc, for consideration. The company says drivers must be at least 21 years of age, the vehicle not more than 10 years old and be fully covered with supplemental insurance. 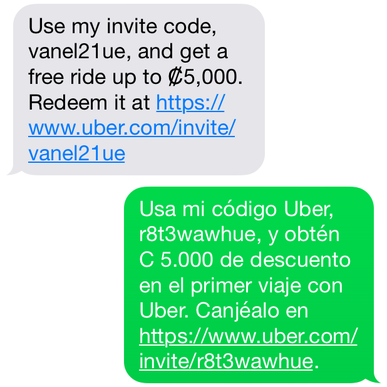 For potential customers, Uber is offering a free ride up to ¢5,000 for recommending a friend. The invite can be sent by text. Both the sender and friend will get the bonus that can be applied towards their first trip.

“Uber will come to hack in Costa Rica,” said Gilbert Ureña, leader of the Foro Nacional de Taxis, who said that this type of transport should be regulated. The same was externalized by Maritza Hernandez, president of the National Chamber of Transport (Canatrans), who pointed out that for this reason the joined in to support taxi drivers.

Meanwhile, while opposed to arrival of Uber, a group of disgruntled former porteadores – the 1,000 plus that recently lost their permit to operate – rejected the government’s latest offer, threatening to take to the streets, no just one time, but on a number of occasions, are also against Uber.