Q MAGAZINE – Batman is ridiculous, because life is ridiculous. Don’t take it so seriously: comic books, TV shows, acting, fighting, life, death. That’s not a lesson Adam West tried to teach, and yet he taught us. West died this weekend, 88 years old. He was half a century out from playing the Caped Crusader in the ’60s series, and so he was half a century into playing his most profound and influential role: “Adam West,” self-mocking yet totally sincere paragon of a vanished age of television and heroism and sincerity and masculinity. 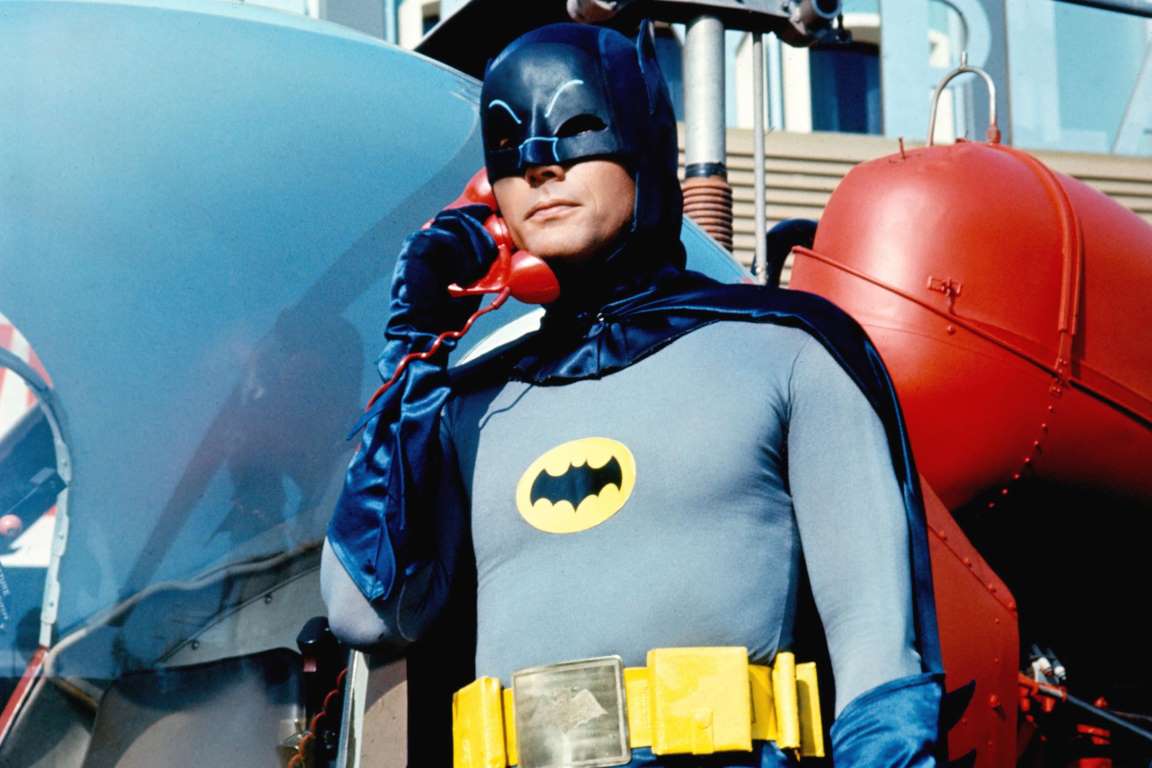 Multiple generations experienced West first as proud self-parody, on Space Ghost Coast to Coast, Murphy Brown, NewsRadio, Family Guy, The Simpsons, 30 Rock. Even when he wasn’t credited as “Adam West,” he was utterly Adam West. (Watch Lookwell right now, dammit!) Past a certain point, he mostly played himself. Thank goodness! No one else could.

West’s Batman show was a phenomenon, and then it was a relic, and now it looks ahead of its time, ahead of our time. Everything Batman became post-West was a counterreaction to West himself: tougher, grittier, darker, black costumes, sewer cities, more realistic man. Of course, “Realism” was a tricky topic, even before we all started living in clashing alternate realities. A rich man dresses like a bat and fights psychoanalysis-themed supercriminals: If you believe that, there’s a bridge in Blüdhaven I’d like to sell you. 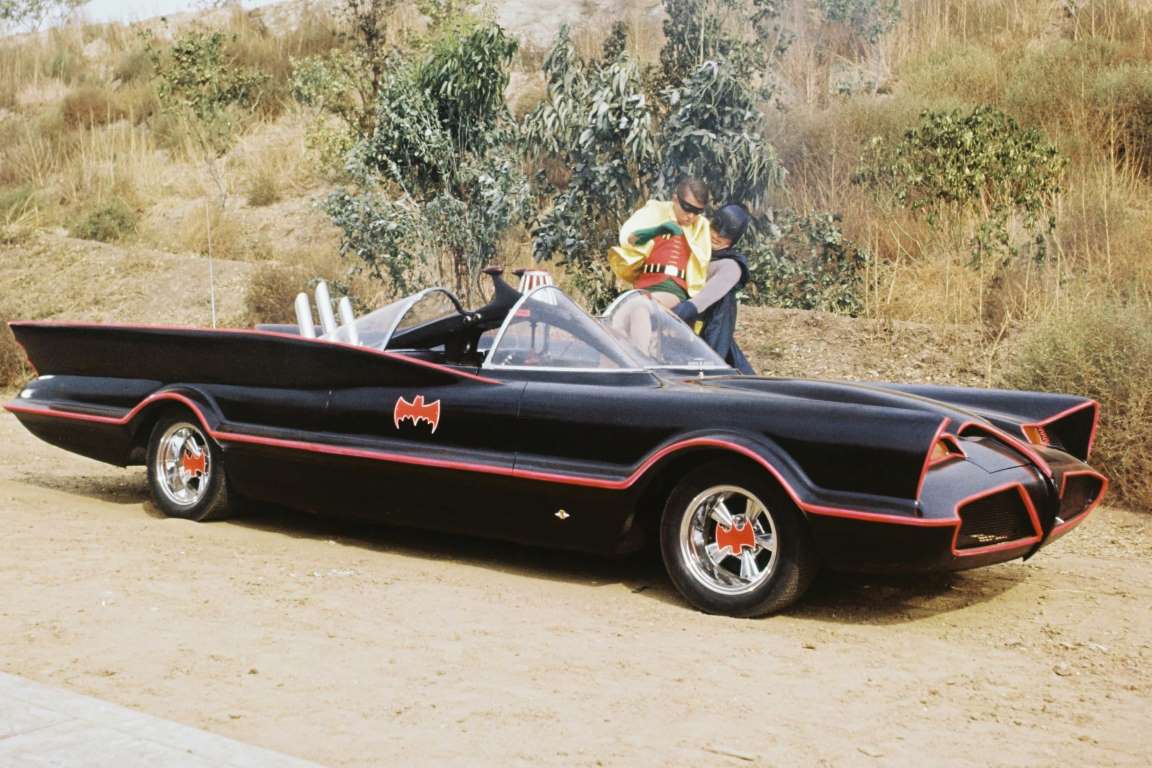 I’m not going to argue that the ’60s Batman show is, like, some brilliant incisive parody of the superhero genre. Or that it gets better when you understand the subtext. (Although: Two handsome unmarried men in sweaters don’t tell their dotty old aunt about the outfits they wear when they go out at night.) The show – and the splendid 1966 movie it spawned – is a goof, a sincere goof, so colorful you would think they just invented color, so pointless you wonder why anyone ever tries to make a point. 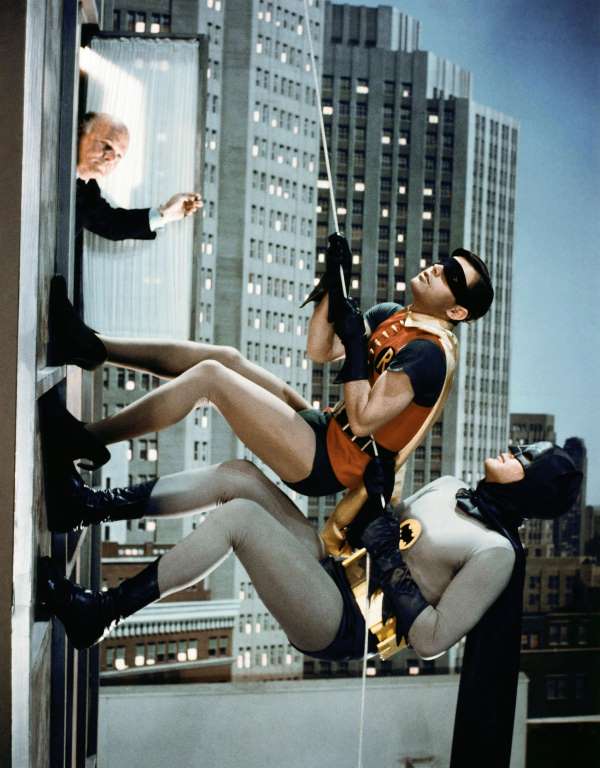 West’s line delivery is deadpan deep baritone, almost talk-sung. (No reason why, but try just listening to his Batman show without watching it; it’s great radio.) The words he’s saying could be silly, and they could be profound. In “The Joker is Wild,” from January 1966, his Bruce Wayne sits in the living room while his young ward Dick Grayson gets a piano lesson from Aunt Harriet. Dick’s frustrated. “Gee whiz, Aunt Harriet,” Dick complains, “What’s the big deal about Chopin?”

Bruce Wane interjects. “All music is important, Dick,” he says. “It’s the universal language. One of our best hopes for the eventual realization of the brotherhood of man.” 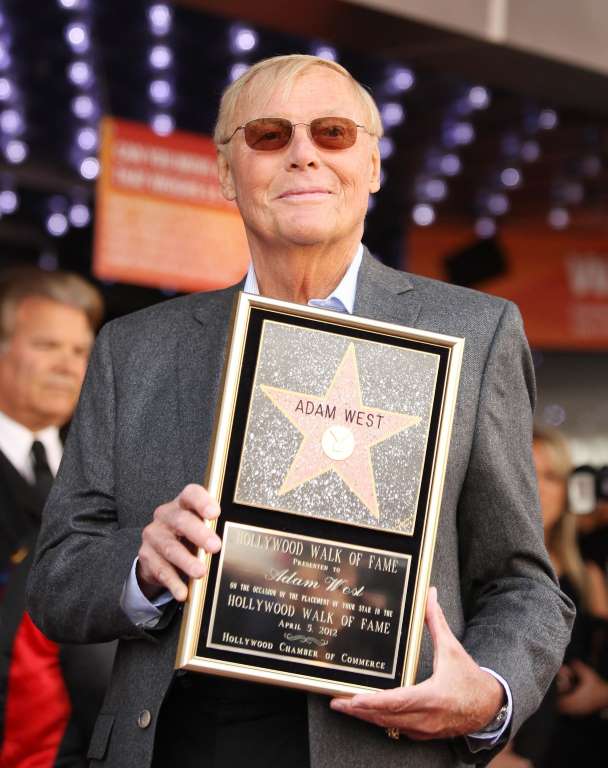 Eventual realization. Say that ten times fast; now say it in the same sentence as “the brotherhood of man.” West’s best remembered in the Bat-suit, but he did his best work out of costume as Wayne, a rich dude with half a smirk who wanted for nothing and was casually curious about everything. It was a suburban dream of wealth: cool cellar, nice car, piano, maternal non-mother and paternal non-father to handle domestic chores like parents do but enable your wildest instincts like parents can’t. And it was a kids’ dream of adulthood: West’s Wayne was untroubled by anything, flirted like a teenager, fought bad guys for no stakes. Weirdly, you could argue West was the most life-experienced person to ever play Batman. By the time the show came along, he’d been in the army, he was twice-divorced, had lived for awhile in Hawaii. Born William West Anderson, he took the name “Adam West” when he moved to Hollywood: “Adam” like the first man, “West” like the wild frontier. A fake name, but so many good things in life are fake, and he put in time in Hollywood’s fake west in various TV shows before the Caped Crusader came along.

Many people today have opinions about Batman. You shouldn’t listen to those people unless they’ve seen the Batman movie West made, mid-phenomenon, after the show’s first season. It’s best remembered for the openly ridiculous moments: Batman fights a shark, say, or Batman runs around with a simmering silent-movie bomb.

The latter is a showcase for the least-remarked-upon thing about West’s Batman. Six-foot-two, pre-muscular, West moves like no other Batman moves. No shots fired on Keaton, Kilmer, Clooney, Bale, or Affleck, but all that “realistic” body armor is constricting. They’re good actors; in Bat-costume, they’re chins. West-as-Wayne suggested richness beyond leisure, a shirttail Kennedy cousin long-weekending in Hyannisport, reclining on a couch in a comfortable mansion made of picture windows. But West-as-Batman was a madness of long limbs, every “action scene” a Batusi waiting to happen. I could watch him run around with this bomb all day. And I challenge any other Bat-actor to say, “Some days you just can’t get rid of a bomb” and make it sound half this funny. 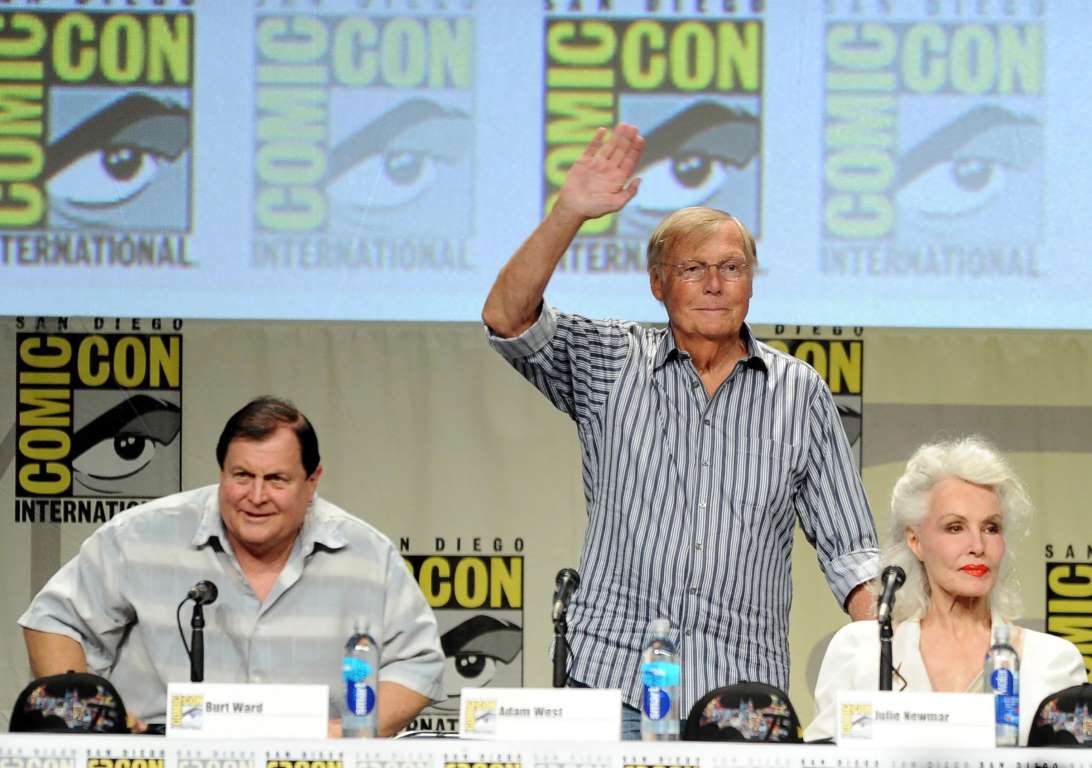 Last year, I interviewed Mark Hamill, the Star Wars star who has voiced Bat-nemesis the Joker for decades now. Hamill’s a talker who loves tangents, and somehow we got to talking about West and his Batman. “He’s so underrated as an actor,” Hamill said. “His timing, his approach, makes the series. One time, Harrison Ford got mad at me because I compared him, in his drollness, to Adam West. And he took it as an insult! And I meant it as an absolute compliment.”

West is underrated. His Batman show was underrated for years. As a blessing for an old man, or a sign that time is a wheel, the culture was just recently starting to catch up to West and to what his Batman show represented. This year’s LEGO Batman Movie was an homage to multiple notions about the Dark Knight, but there were some extra-special references to West’s era: shark repellent, onscreen “POW!” sound effects, the whole central idea that there is something truly wonderfully, outrageously funny about Batman. The comic book series Batman ’66 ran for a few years, centralizing the notion that the show’s campy anti-serious tone was an artistic choice, not some “These guys don’t get it!” betrayal. West himself had a few official DC roles. His last listed project on IMDb is “Bruce Wayne/Batman” in something called Batman vs. Two-Face. Will anyone else ever play Batman across 51 years? 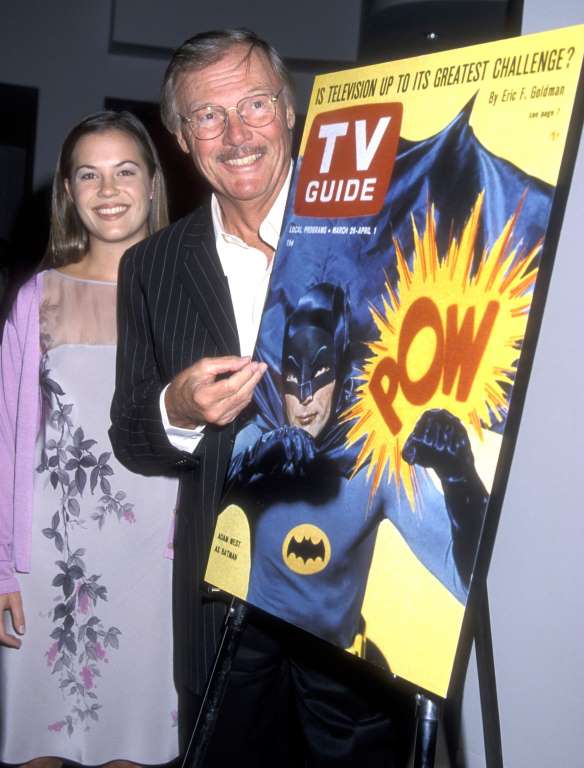 There’s a late-series outing of the Batman show called “Surf’s Up! Joker’s Under!” It is about the Joker trying to become “KING OF THE SURF AND ALL THE SURFERS.” The episode is built from surfing stock footage, a musical interlude featuring green-haired rock band “Johnnie Green and the Green Men,” a “surfer’s hangout run by onetime surfing great Hot Dog Harrigan” called the Hang Five that’s really just a black-walled set full of furniture colored purple-green-yellow, and lots of two-way radio communication via hot dog. It’s absurd. It feels like the ’60s the way no Batman movie post-Prince-soundtrack ever feels like an actual decade, and it features one of the all-time great line readings by any actor, ever. Cut to Adam West, in full Bat get-up, plotting anti-Joker espionage with Burt Ward’s Robin. “Leave your board outside the Hang Five and follow me in,” Batman tells Robin. “But play it cool.”

Six years ago, I was fortunate enough to interview West at Comic-Con. I was not an experienced interviewer, and he was a ludicrously experienced interviewee, had been answering questions about the greatest work of his life for more than half of his life. “We’ve been 45 years with this nonsense,” he said. No one ever made the word “nonsense” sound lovelier, funnier, more essential. 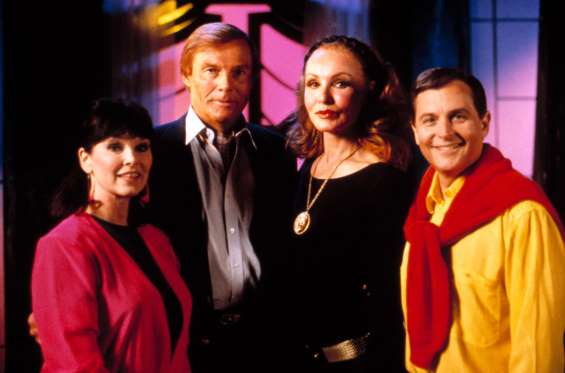 West’s Batman is beautiful nonsense from a time before the average grown-up took superheroes seriously. But West wasn’t doing comedy, and wasn’t making fun, wasn’t above it all. His Batman seems fully invested in superheroism, yet just offside, lack of quote marks producing quote marks, arched eyebrows literally painted on his Bat-mask. Superheroes, entertainment, art, life: It’s all nonsense, so why not play along? For half a century, West played along. And he played it cool.

QCOSTARICA - It is reasonable to believe the major...
Reports