Increase in the Dollar Exchange

After three months of relative stability, the exchange rate of the U.S. currency compared to the Colón increased from ₡568 in mid-August to ₡575.67 this morning. 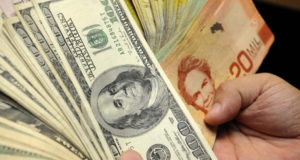 Nacion.com reports that “…Although the variation is small, since it is only 0.64%, it breaks a stable period that was maintained from May 31 to August 14. In that period it remained very close to ¢568.”

The increase was registered in the price of the dollar in the wholesale Monex market, where transactions between financial entities are carried out.

The increase is already reflected in the exchange applied at the banks.

The exchange rate could also start to reflect the arrival of the new president, Rodrigo Cubero, to the Central Bank, who assured that during his term of office the price of the currency would have a greater float, both upwards and downwards.

According to the BCCR, the aim of this variability is to continue to advance in the inflation targeting scheme, where all the exchange and monetary policy is subject to reaching an objective for this indicator.

- Advertisement -
Paying the bills
Previous articleCosta Rica will protect refugees on the pretenses of Daniel Ortega
Next articleBaby 5 Million Born in Heredia!