Inferno In San Jose Leaves 40 Families With Nothing (Photos) 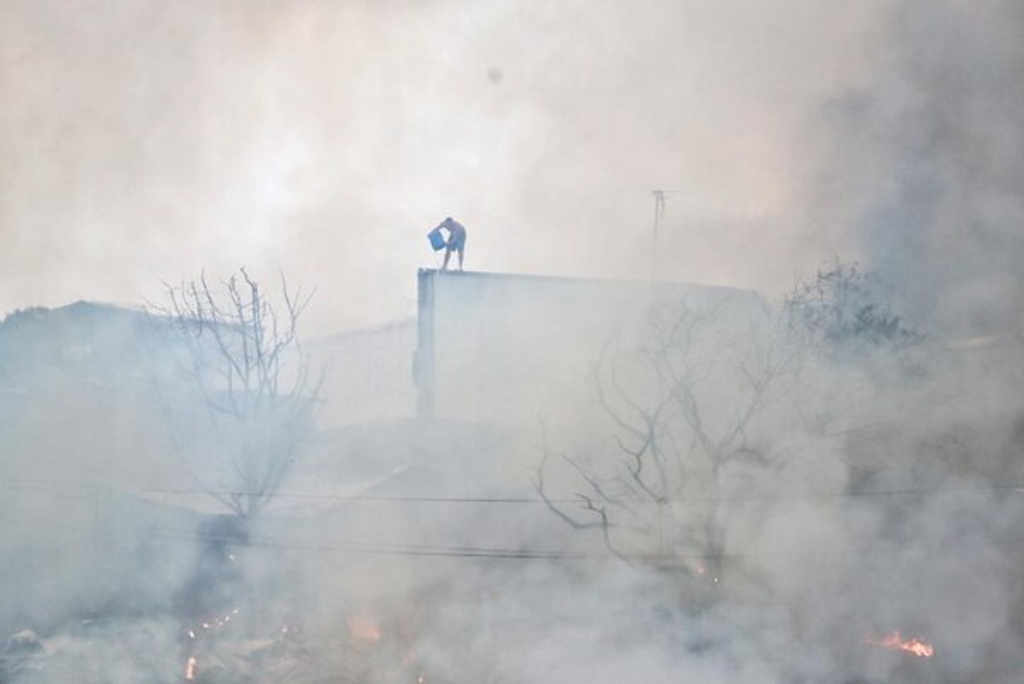 A huge fire Monday afternoon consumed left some 40 families homeless and with nothing but the clothes on their backs, in the makeshift community known as El Pochote, in Barrio Cuba, in the Hospital District of San José.

The fire that began around 4:00 pm burned everything in a square area estimated between 1,500 and 1,800 square meters (16,000 and 20,000 square feet), dwellings mostly wood and zinc, with a few concrete or metal structures, accessed only a narrow alley, home to some 300 people. 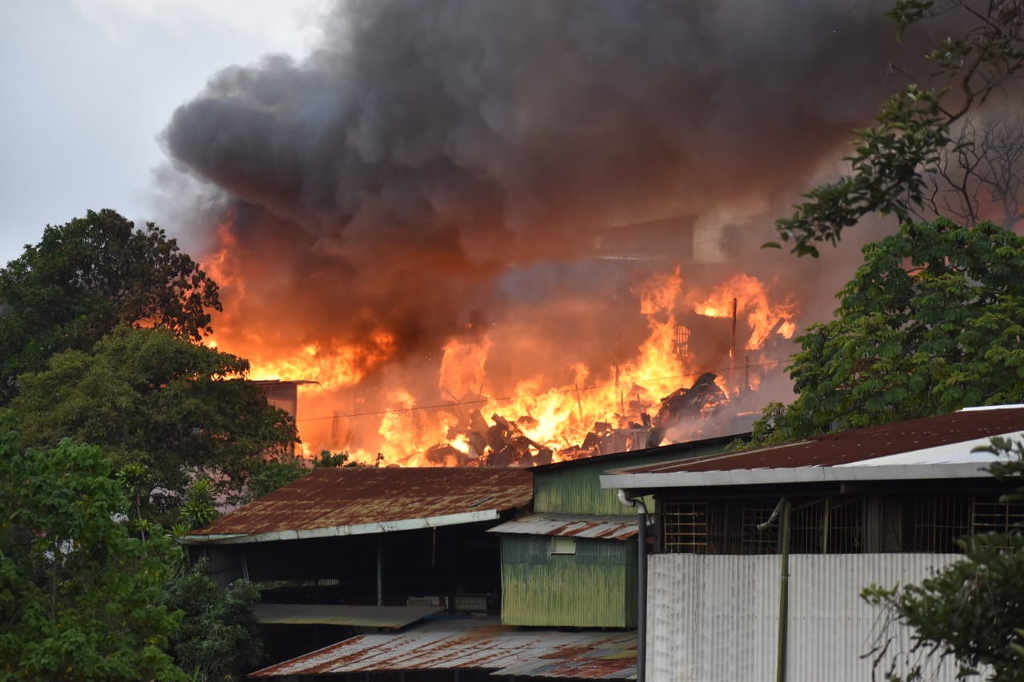 Twelve fire units (some 120 firefighters), two tanker trucks with a capacity of 26,000 gallons each to provide water, due to lack of nearby fire hydrants, ambulances, and the Aparatos de Respiración Autocontenida (Arac) – Self-Contained Breathing Apparatus helped with the emergency.

The first alarm was at 4:05 pm, the Bomberos (fire department) reported having the fire under control at 5:53 pm, almost two hours later, to give an idea of the enormity of the inferno. 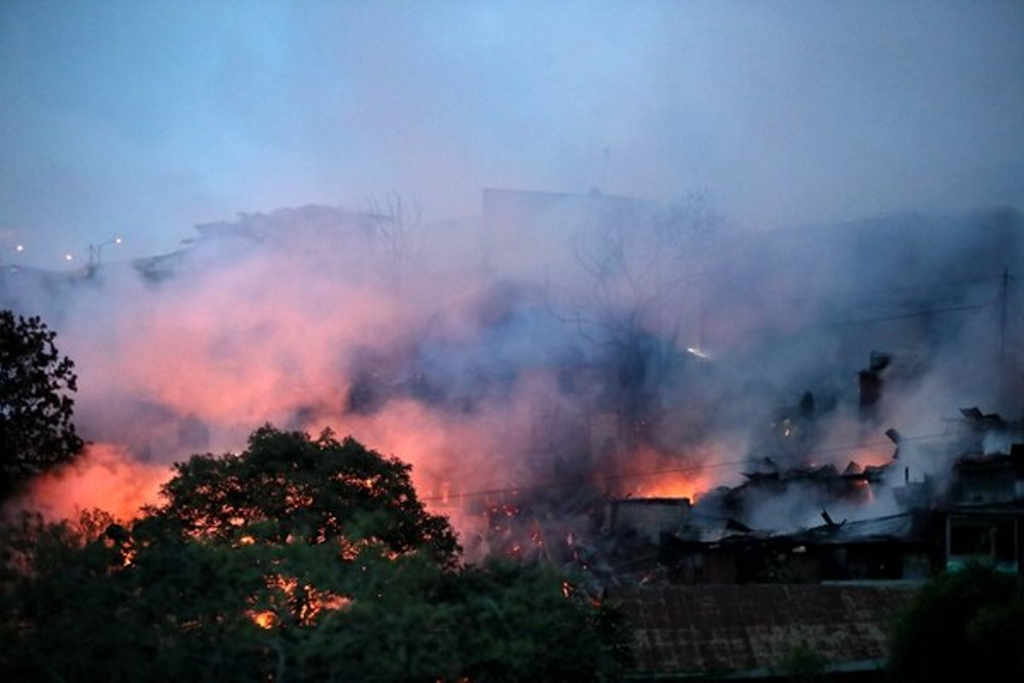 Luckily no one was seriously injured, trapped by the flames or victims to mourn.

Héctor Chaves, director of the Bomberos said that several of the residents required assistance for respiratory problems due to the heavy smoke and three firefighters received medical attention, two after inhaling toxic gases and another suffered an injury when part of a wall/roof fell on him.

The narrow alley and uneven terrain made it difficult for quick access to the fire. 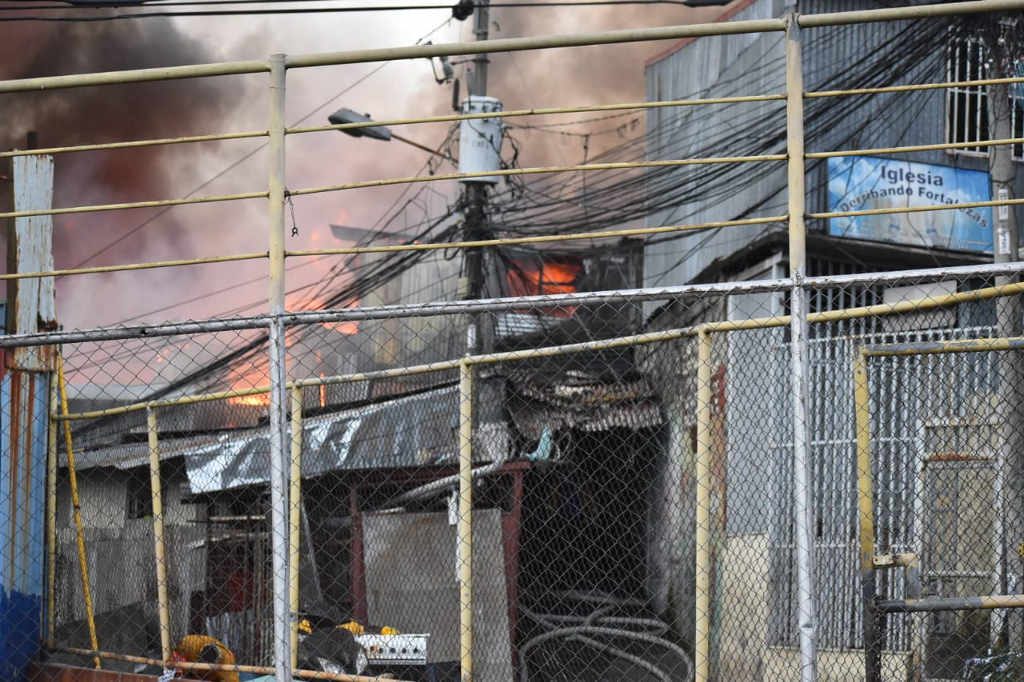 María del Milagro Pérez, a resident, said that around 4:00 pm she heard a big explosion, most likely from a short in the tangled web of overhead power cables and transformers. “I could only take some things and my dog. Everything happened very fast. I have been living here for eight years. There were three people in my house and we were able to leave.”

Problems with working hydrants and flowing water led the firefighters to extend a tandem hose of almost a kilometer (some 3,000 feet), from the scene of the fire to the Numar company.

As the fire burned, a dense black cloud could be observed several kilometers away, according to drivers and people living in nearby places, such as the Hatillos.

In addition, police closed off all access to the area, to avoid incidents, in particular, to stop residents from wanting to re-enter their burning homes, dwelling that for the most part were separated by a makeshift wall made of wood or zinc, which facilitated the fire to spread easily. 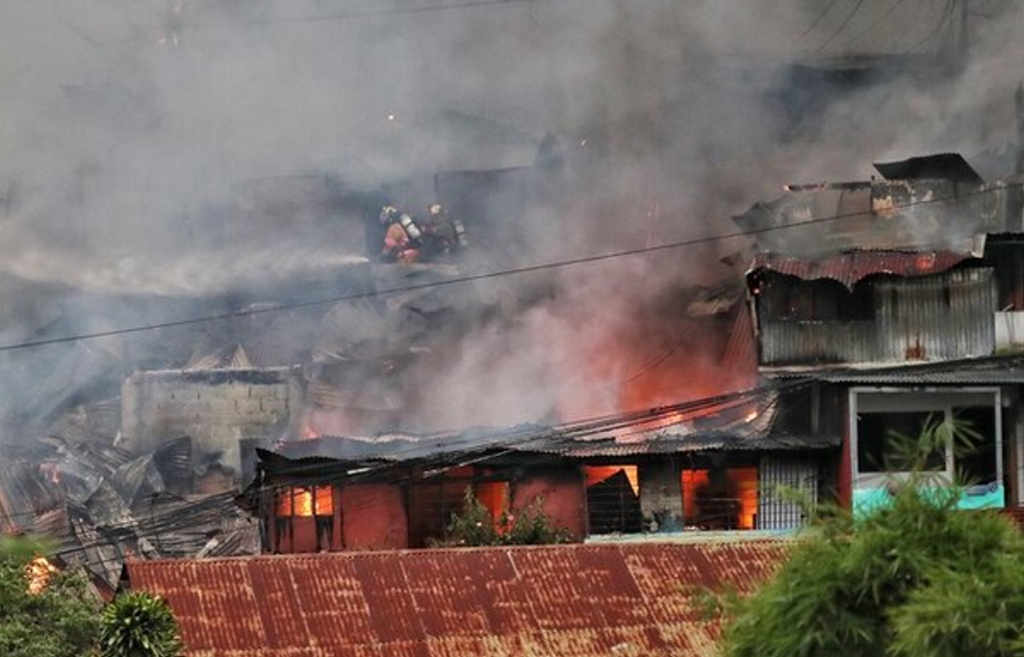 The Bomberos used special equipment to confirm that, according to Luis Salas, operative director of rescue, no one was trapped inside the debris, everyone was able to get out. 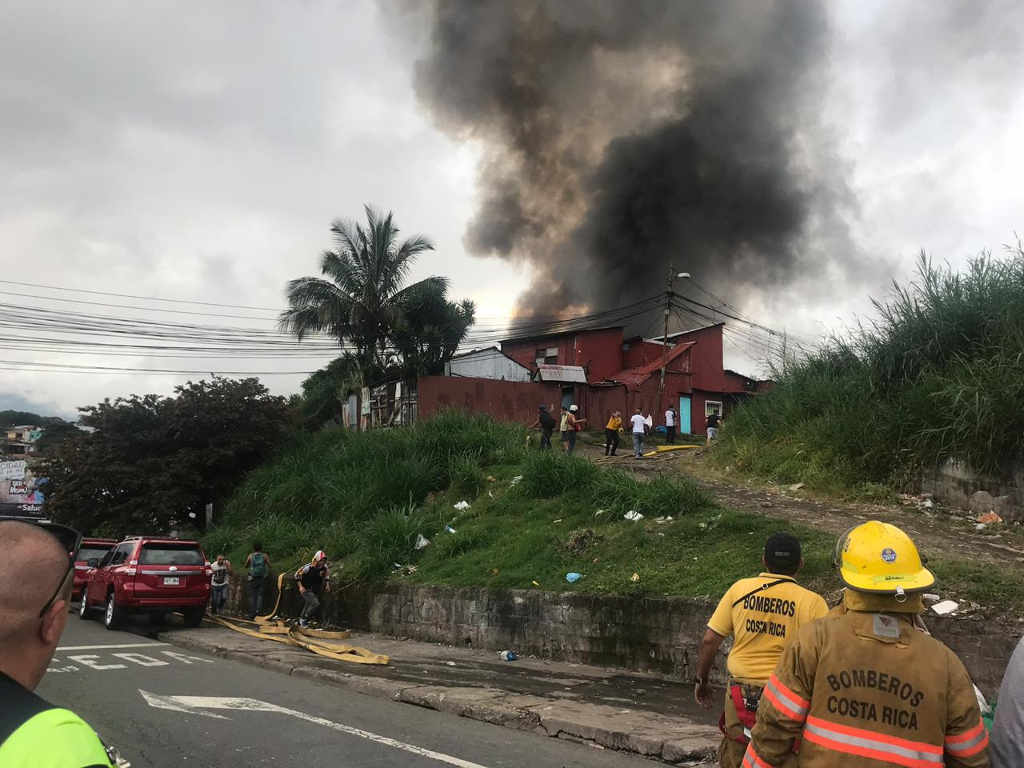 For the most part, “tugurios” – makeshift communities or shantytowns, are built ad-hoc, growing around a few original structures, adding as more and more people settle into the community, built with whatever is available, illegal electrical connections, some even legal as the utility companies do make connections on request. Water pipes connect the homes. Building permits, what are those? A fire code? No fire here…until…

Fire inspectors were able to pinpoint where Monday night’s fire started, at the end of the alley, deep down into the makeshift community, farthest from the main road. They have not as yet determined the cause. 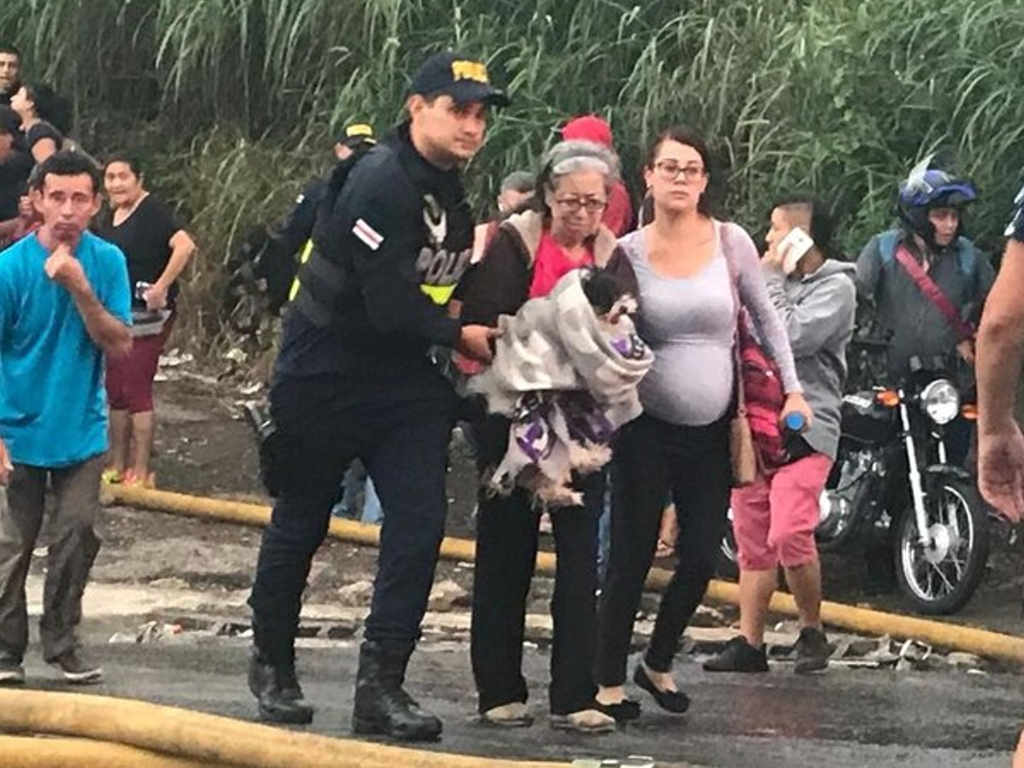 Some 300 people (200 adults and 100 children), almost the entire community last night took shelter in the Barrio Cuba recreational center, others were fortunate enough to have a family to take them in. 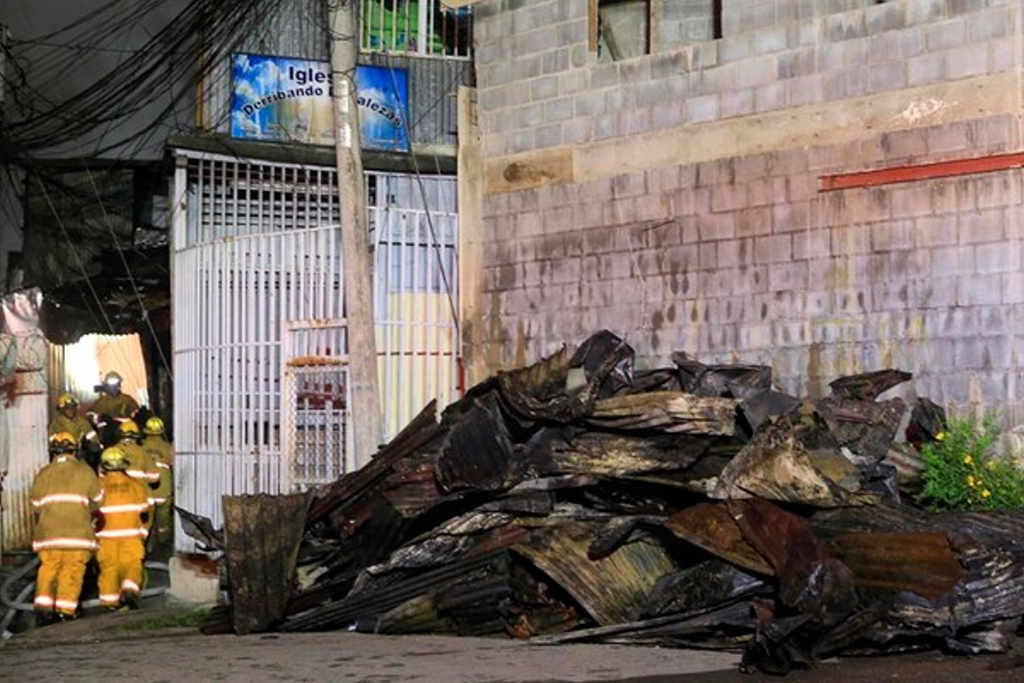 Aid has been pouring in. Water bottles, foam mattresses, bed sheets, towels, non-perishable foods. Diapers for the children, milk, and cereal are in great need.

If you can help, take your donations to the Barrio Cuba recreational center.

- Advertisement -
Paying the bills
Previous articleUnrest across Latin America over mining projects
Next articleKarma? Man dies when hit by a car after assaulting a woman in Cartago

QCOSTARICA - The dollar exchange has shown an almost...
National

QCOSTARICA - According to the United States National Hurricane...