Is Colombia Headed Back to the Bad Old Times? 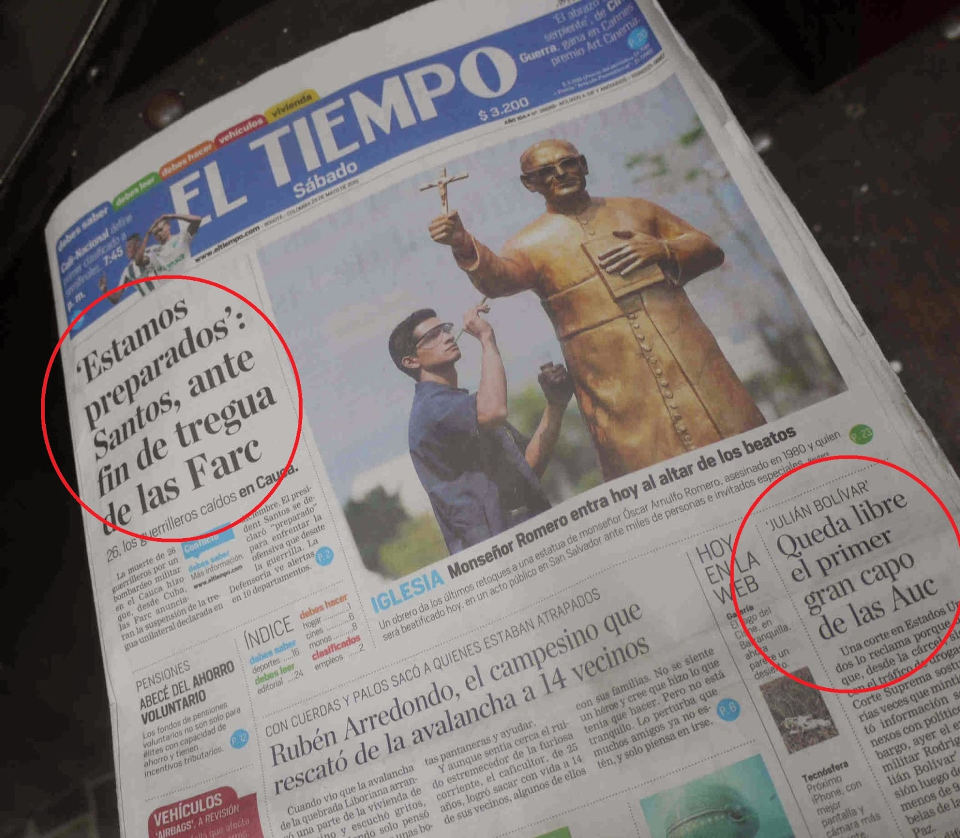 (TODAY COLOMBIA) — In Sunday’s El Tiempo, the coincidence of two headlines sent a disturbing message about the danger of bad old times returning.

In the upper left-hand corner, a report about the end of the informal truce between the government and the FARC guerrillas. The peace negotiations in Havana, Cuba look to be in danger of breaking down, in the wake of a FARC ambush which killed 10 soldiers and military bombardments in which the government claims to have killed two dozen guerrilla fighters.

The peace talks have bogged down over the past year, primarily over what the guerrilla leaders’ fate would be after a peace deal. The guerrillas want to become politicians, but the overwhelming majority of Colombians wants to see them in prison.

In the lower right corner, the paper reports the release from prison of Julian Bolivar, the first major paramilitary leader to win his freedom after serving the 8-year prison term stipulated by the controversial Law of Peace and Justice.

Under the law, paramilitaries who confessed to their crimes and ceased committing crimes receive maximum 8-year prison terms. Bolivar, whose real name is Rodrigo Pérez Alzate, had confessed to responsibility for or been convicted of crimes including massacres, recruiting children, driving peasants off their land, torture, narcotrafficking, assassinating union leaders, money laundering and ‘barbarous acts’ as head of a paramilitary group in the Antioquia and Magdalena Medio regions.

The crimes were committed as head of the Bloque Central Bolívar, under the pretense of battling leftist guerrillas.

The succession of paramilitary leaders being released has victims worried that they will return to crime and terrorism and take vengeance on those who denounced them. And the ohe ongoing resurgence of the conflict with the guerrillas makes that seem all the more possible.