Is Venezuela Becoming the Most Dangerous Nation in Latin America? 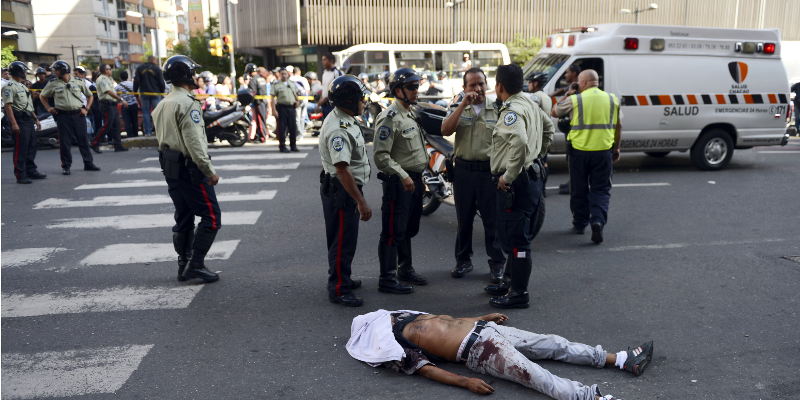 TODAY VENEZUELA – With nearly 25,000 violent deaths estimated for 2014 and 90 violent deaths reported in Caracas in the first week of 2015, Venezuela may now be one of the most dangerous nations in the Americas, although the lack of official statistics obscure the true scale of the security crisis.

As El Nacional reported, the Caracas Bello Monte morgue received 90 bodies during the first six days of the new year. The violence hasn’t been limited to the Venezuelan capital: in the northern state of Aragua, a gang reportedly ambushed a funeral and killed seven people, wounding another five.

The killings do not bode well for Venezuela, where the government has not released official statistics on violent deaths since 2005. The Venezuelan Violence Observatory, an NGO made up of researchers from seven universities across the country, estimated that there were 24,980 violent deaths in Venezuela last year — including homicides, police killings, and deaths with unknown intent.

These numbers aren’t body counts based on current police data, death certificates, or data from other official sources, as the Venezuelan government doesn’t make this information available to the public. Instead, they are the OVV’s projections based on statistical models that rely on past available data, compiled by investigative police agency the CICPC.

The government hasn’t yet released their count of the 2014 homicide rate — nor have they released an estimate on the total number of violent deaths there were in Venezuela. However, Venezuela’s former interior minister did say last year that homicides are going down — he predicted that 2014 would close with a homicide rate of between 32 to 35 murders for every 100,000 people. He supplied no data to support this claim.

While this is significantly lower than the OVV’s 2014 estimate of 54 per 100,000, another data set suggests that the OVV’s projections are quite reasonable when it comes to measuring violence in the country, as indicated in the chart below.

(The numbers for the “official” homicide and violent death rate are taken from a 2012 presentation by Woodrow Wilson Center expert Ana Maria Sanjuan. According to her presentation, the data was compiled by the Central University of Venezuela, and is based on “official statistics.” The violent death rate presented here does include homicides, police killings, and killings of undetermined intent. United Nations Office on Drugs and Crime (UNODOC) statistics from here. The OVV statistics measure Venezuela’s homicide rate from 2000 to 2008).

At the end of the day, the OVV’s numbers are well-informed estimates, carefully put together in the belief that these projections are better than nothing. Venezuela badly needs more transparency and hard data about the country’s ongoing violence, although the government has resisted requests to provide it, insisting the information would be distorted and manipulated by the political opposition. Even the Ministry of Health hasn’t updated its death records since 2011.

Further muddying the waters are obscure statements about the violence by government officials, usually raising more questions than answers. What did the former interior minister mean, for example, when he said last year that 76 percent of Venezuela’s homicides involved conflicts between rival gangs, and conflicts between criminals and security forces? How do officials distinguish between these two categories? Is it something similar to Mexico, in which the government deems a death is a “murder linked to organized crime” depending on the caliber of the firearm found at the crime scene?

With an estimated homicide rate of 54 deaths for every 100,000 people, this puts Venezuela among the top three most violent countries in Latin America, right behind El Salvador — with a 2014 homicide rate of 69 per 100,000 — and Honduras, with a rate of 66. When considering Venezuela’s violent death rate, the country is the second most violent in the world, right behind Honduras, according to the OVV.

If Venezuela is able to at last push through with the mass implementation of a trained, community police force that doesn’t rely so heavily on excessive force — perhaps resulting in fewer people killed in confrontations with police — this could reduce violence somewhat in 2015. Another short-term solution that the Venezuela could realistically take in the short term would be to finally release its data on violence, along with a detailed explanation of their methodology for compiling the numbers. While this wouldn’t impact violence rates, it would mean that the political opposition could no longer accuse the government of lack of transparency — and if homicide rates are indeed going down, it would arguably be in the government’s interest to finally do so.

However, InSight Crime believes that homicides are going to increase during 2015, as Venezuela faces a shortfall in revenue due to falling oil prices and increasing social unrest.