Isla del Coco To Get Power

For decades Cocos Island, the Costa Rican ecological treasure in the Pacific Ocean, has been the least popular place for guards to be stationed. The uninhabited island, world patrimonial site, had no electricity at all until 2003 and could not be used as even a permanent Coast Guard base to protect the island’s waters against illegal fishing. 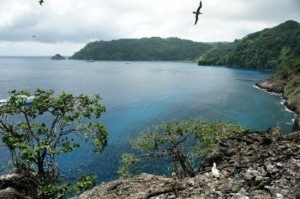 But that is due to change, thanks to a multi-institutional move to put hydroelectric generators on line there. The Olivier Hydroelectric Project installations will cost $2 million which will include a radar installation to detect illegal fishing boats which have long thumbed their noses at Costa Rica’s Coast Guard cutters too slow to arrive at the island intime to catch intruders.

Park Guards also were largely unable to catch diggers for the legendary Spanish treasure rumored to have been buried on the island but never found. Its waters have been violated hundreds of times by foreign fishing boats after tuna and even shark fins in waters teeming with fish life, even with help by private environmental foundations.

By means of a duct, the generators will provide 60 kilowatts to the rough housing for guards and the guard tower. Next year, the radar is due to be installed, according to the Environment Ministry and the electrical provider ICE and its distribution subsidiary CNFL.

Payment for the installation comes from not only the government but such private funds as Convervation International, Costa Rica para Siempre, Ocean Fire Foundation, the Walton Foundation, Linden Trust for Conservation and the Gordon and Betty Moore Foundation.

Also donating funds is the Japanese government, to be administered by the Friends of Cocos Island foundation. The radar installation is envisioned to be the first of 17 radars set up on the coastlines of both oceans to control illegal fishing, human trafficking, contamination, fuel contraband and narcotics traffic.

“Radar will permit identification of vessels around the island and this will make boarding them easier,” Rafael Gutierrez of the National System of Conservation Areas (Sinac). The Coast Guard and park guard will be alerted to incursions but a satellite feed linked to the radar.

Power needs have been calculated for the island at something like 20 kilowatts. Another project, Genio, has functioned on the island since 2003 but did not envision the needs of a radar installation. Solar panels will back up the Olivier project.