“It Was The Police, I Saw Them” Says Mother Of Murdered 14-month-old Baby 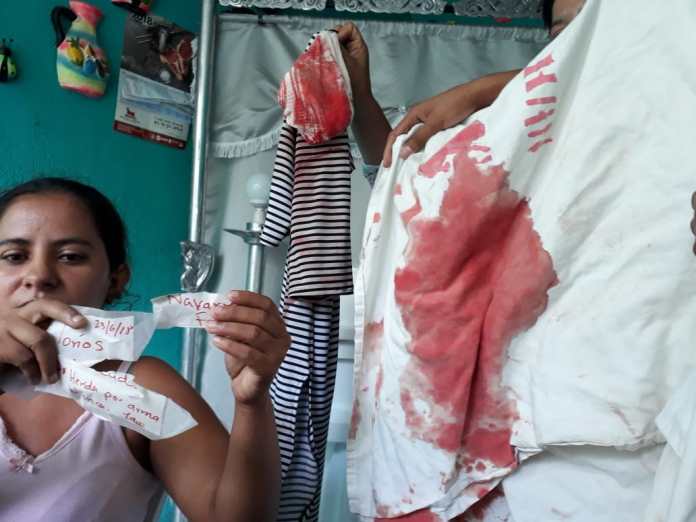 The corner where the morning of this Saturday, Father’s Day in Nicaragua, 14 months old Teyler Lorío Navarrete was killed by a bullet in the head, was recurrent for his family.

Every day they went by the corner in the Americas 1 neighborhood in Managua, to his grandmother’s, to take care of him, while his parents worked.

Every day Karina, Teyler’s mother, and her family go through the Americas 1 neighborhood to leave their two children, 7 years and 14 months, to her mother-in-law’s house, to work as a domestic in a place nearby.

According to neighbors of the area, for two months the neighborhood has been filled with police and paramilitaries who intimidate the population.

At about seven in the morning, the family was passing by the corner in front of the Americas 1 school, seeing several armed men, ready to shoot. They were all dressed in black and hooded and began to shoot at them. “My husband who was carrying the baby turned back to see and that’s when the bullet hit my baby’s head. We left running and there a boy helped us and they took him to the Alemán (hospital), but there they told us that he was already dead,” says Karina.

“My child died of a gunshot, not of something else”

According to a press release from the Policía Nacional (National Police) issued hours after the murder, it states that the incident and the police directly blames “criminals besieging the neighborhoods surrounding the Polytechnic University of Nicaragua”.

Karina Navarrete does not believe in this version. “It was the police. I saw them, nobody told me,” she emphasizes.

The young mother expresses that she knew that the attackers were police officers when she and her husband saw their posture and the weapons they had. “They did not look like lazy kids, they were cops. My child died of a gunshot, not of something else. I saw them, it was the police,” she says.

According to residents of the Americas 1, a member of the Council of Citizen Power (CPC) had come days before to threaten the relatives of Navarrete to “stop publishing shit (sic)”.

Teyler’s entire family has been critical of the government during these last two months of protests.

“I think the bullets were for us. As soon as we turned in that corner they started firing. There was no one in front, only us. It was a directed attack, I think,” says the mother.

To get to Teyler’s wake one has to go through hidden alleys. Several western neighborhoods remain a kind of fence with armed and hooded policemen that prohibit access to civilians. Five hours after the death of the baby, his father Nelson Lorío and older sister had not been able to leave a house near for fear that the police officers would shoot them.

“They tried to change how my son died”

According to the death certificate that was given to the relatives, Teyler died of “a wound by firearm in the skull”. However, in some documents delivered to the mother in the hospital, “death by knife wound” was written and a second document issued by the cemetery, the death was typified as an attempted suicide, although the veracity of the latter documents has been denied by many.

The Navarrete family describes the other versions of the baby’s death as “a mockery of the memory” of their son.

This morning the Secretary General of the OAS, Luis Almagro, condemned the murder of Teyler on social networks. “We demand justice,” he wrote.

“I ask for justice for my child and it is hard to know that, even if I beg on my knees, while that man (Daniel Ortega) is there, we will not see it,” regrets Navarrete.

The family makes a call of help from the international human rights authorities to take their case into account.

The funeral of Teyler Lorío will be on June 24 in the Milagro de Dios cemetery, in Managua.