JFK Was The First U.S. President to Visit Costa Rica

The President and his entourage came to Costa Rica to attend a summit with the presidents of six countries in Latin America. This was a historical day in Costa Rica because JFK received a huge turnout of Costa Ricans, more than any other Costa Rican event in the country’s history. Costa Rican school children lined both sides of  Paseo Colón to watch President Kennedy’s motorcade pass by. 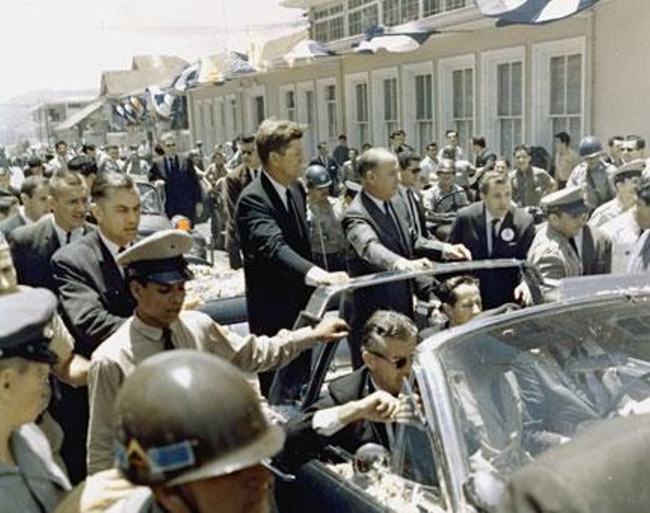 Another historic event coincided with JFK’s visit to Costa Rica, the eruption of the Irazú Volcano.Falling ash from the eruption caused heavy damage to infrastructure and life in San José and its surroundings for over a year and spread from Costa Rica to Nicaragua.

Costa Ricans were so enamored by President Kennedy’s visit that they named a park in the suburb of San Perdo after him. The park is located on a corner, across from the church and about 200 metres south of the University of Costa Rica (UCR) and commuter train line.

The next president to visit Costa Rica was the first president Bush (Geroge Sr.) who came to attend a hemispheric summit from October 27-28 1989 at the newly inaugurated Plaza de la Democracia in downtown San José. I vividly remember this event since I went to see the festivities.

In 1997, Bill Clinton came to Costa Rica as the president of the United States for the 1997 Summit of the Americas, where he joined Latin American leaders in pledging commitments to sustainable development. Much like they did when President Kennedy visited, schoolchildren greeted the president as his motorcade worked its way along Paseo Colón on the way to a meeting at the Teatro Nacional in the heart of downtown San José. The president actually mingled with the crowd outside the theatre and several people gave him souvenirs. I was there with my young son and witnessed the events of the day.

A couple of things really stood out about Mr. Clinton’s visit. First, when Hilary was interviewed she stated that Costa Rica was one of the countries they really wanted to visit during Bill’s presidency. Also, when the president was about to depart on Air Force One he picked up a large Costa Rican flag and waved it back and fourth several times. I have never seen a U.S. president do anything similar. I guess he was really impressed with our country and its people.

President Obama is set to visit Costa Rica on May 3-4th as part of a trip which will also include a visit to Mexico. He will meet with the heads of the Central American Integration System (SICA). This will be the first U.S. president to visit Costa Rica since Bill Clinton’s in 1997.

According to a recent Gallup poll seventy-eight percent of Costa Ricans have a favourable opinion of Mr. Obama. This his a higher approval rating than in his own country. Costa Ricans are also convinced that the president’s visit will also improve relations between the two countries.