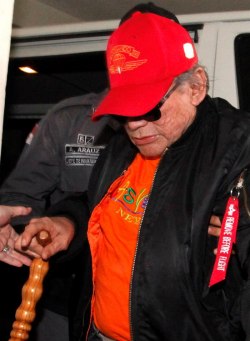 DAVID, Panama – Former Gen. Manuel Antonio Noriega remains in “critical” condition and a Panamanian judge on Tuesday ordered that the “medical house arrest” under which the ex-strongman is serving a lengthy prison sentence be maintained for one year.

Judge Katherine Pitti de Molina, in a hearing held in a Chiriqui court on Tuesday, said that her decision was based on the monthly medical report that must be provided by the state-run Santo Tomas Hospital in Panama City regarding Noriega’s delicate state of health.

The magistrate ordered that supervisory and control measures will be overseen by Panama’s compliance judge.

Noriega’s attorney, Ezra Angel, who came to court accompanied by the daughter of the former general, Sandra Noriega, asked that authorities investigate who took and leaked the photograph that recently was published in the media and on social networks showing Noriega in the intensive care unit at Santo Tomas Hospital.

Pitti ordered the Public Ministry to launch the appropriate investigation because Noriega’s right to privacy had been violated and to strengthen security measures with four police units outside his hospital room.

The judge said at the hearing that the police units guarding Noriega are prohibited from entering Noriega’s room without authorization from the Chiriqui Compliance Court and that off-duty health personnel also may not enter his room. In addition, no technological communications devices are allowed in the former general’s room.

The attorney added that “they fear for (Noriega’s) life” because “in the same way that the photo was taken, also they could have poisoned him, killed him or disconnected any of the equipment that keeps him alive.”

Noriega is serving a 20-year prison sentence for the 1985 disappearance and murder of opposition physician Hugo Spadafora, whose body turned up on the Costa Rican side of the mutual border with Panama.

On Sunday, the 83-year-old former dictator marked two months in the intensive care unit at the hospital after being operated on for a benign brain tumor, and his health condition continues to be delicate after health complications and a second surgery due to hemorrhaging.

Tuesday’s hearing was held to review the house arrest order the compliance judge implemented on Jan. 28 so that Noriega could be prepared for surgery.

Noriega, who governed Panama with an iron fist from 1983-1989 and was deposed in a US invasion, was extradited to Panama in late 2011 after serving more than 20 years in US and French prisons for drug trafficking and money laundering.

- Advertisement -
Paying the bills
Previous articleBolivia Mobilizes Troops to the Border as Chile Warns of Escalation
Next articleWhich Countries Study Which Languages? Here Are The Languages The World Is Trying To Learn