Ketamine: From anesthetic for animals to drugs used by the young 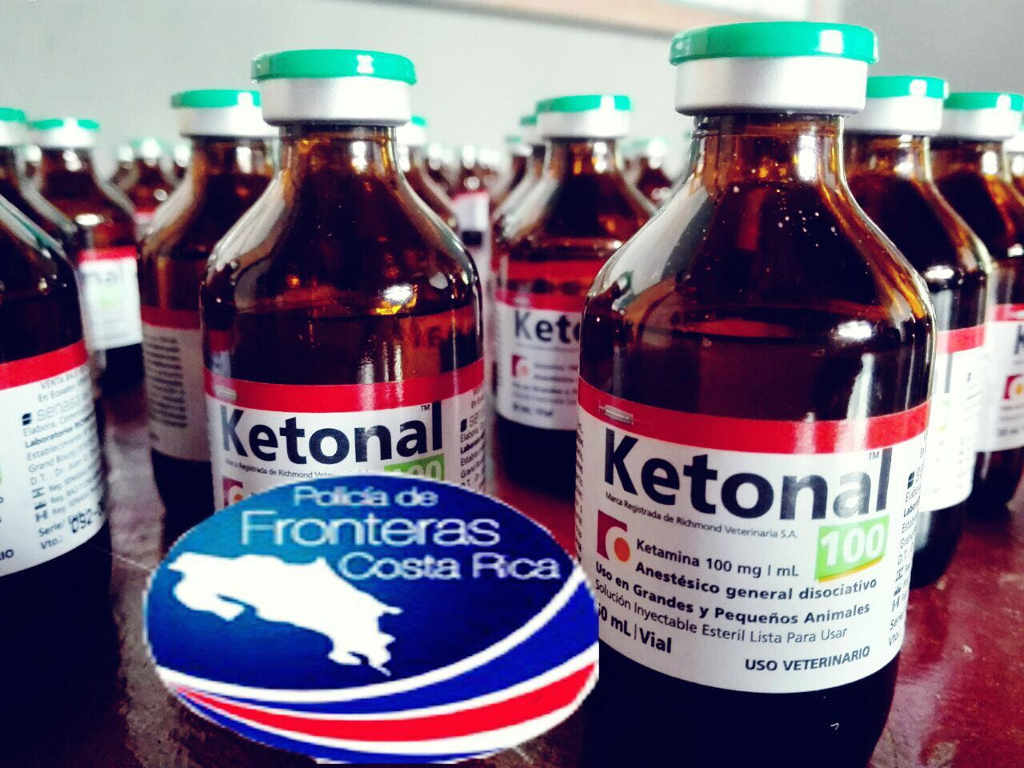 Ketamine, categorized as a “dissociative anesthetic,” is used in powdered or liquid form as an anesthetic, usually on animals. It can be injected, consumed in drinks, snorted, or added to joints or cigarettes.

At high doses, users experience an effect referred to as “K-Hole,” an “out of body” or “near-death” experience.

Due to the detached, dreamlike state it creates, where the user finds it difficult to move, ketamine has been used as a “date-rape” drug.

From 2017 to the first quarter of 2019 the seizures of Ketamine (Ketamina in Spanish) in Costa Rica increased by 30,000%. Traffickers obtain it without problem in countries without controls,  such as Nicaragua.

According to the Ministry of Public Security (MSP), in 2017 police forces seized 325 doses of ketamina. A figure equivalent to 0.025% of the 98,001 doses seized in the first quarter of this year.

Each dose is equivalent to 0.5 milliliters and, regularly, when it reaches the hands of the traffickers, it is transformed into a powder so that it can be snorted or combined with drinks. 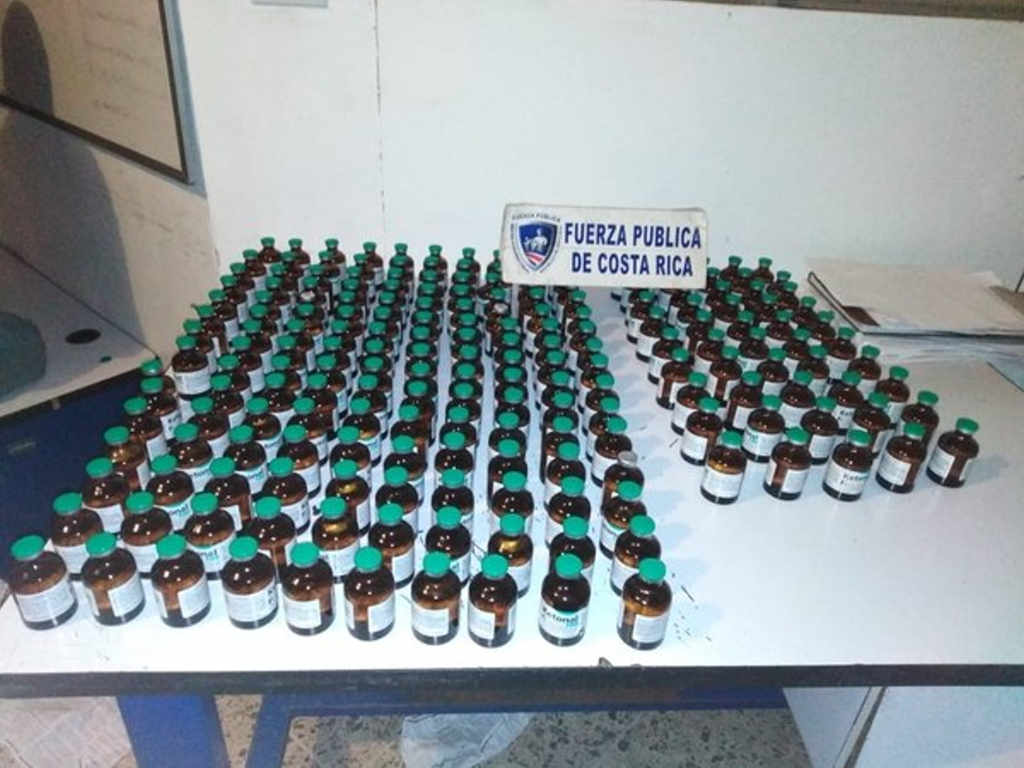 Authorities admit that the increase in seizures so far this year is considerable. What is worrisome for authorities is that the seizures of the drug known locally as “Gato”, “Special K” or “Kit Kat” are in great quantities each time.

Authorities explain the drug is entered into Tico territory typically by “burros” (mules), who buy the liquid form of the anesthetic in Nicaragua, then evade border controls, delivering the drugs to the traffickers.

While Ketamine is hard to come by in Costa Rica, in the neighboring country, its acquisition is simple.

Guillermo Araya, director of the Costa Rican Institute of Drugs (ICD), explained that in the 90s ketamine was used to mix with cocaine. Years later, as of 2013, data began to be received of its independent use and, in 2016, when it was regulated as a prescribed substance in Costa Rica, the trafficking began.

“When ketamine or ketanol, as it is also called, begins to be a regulated substance, in which the veterinarians who use it must register, we note an increase in international traffic, specifically from Nicaragua to Costa Rica,” said Araya 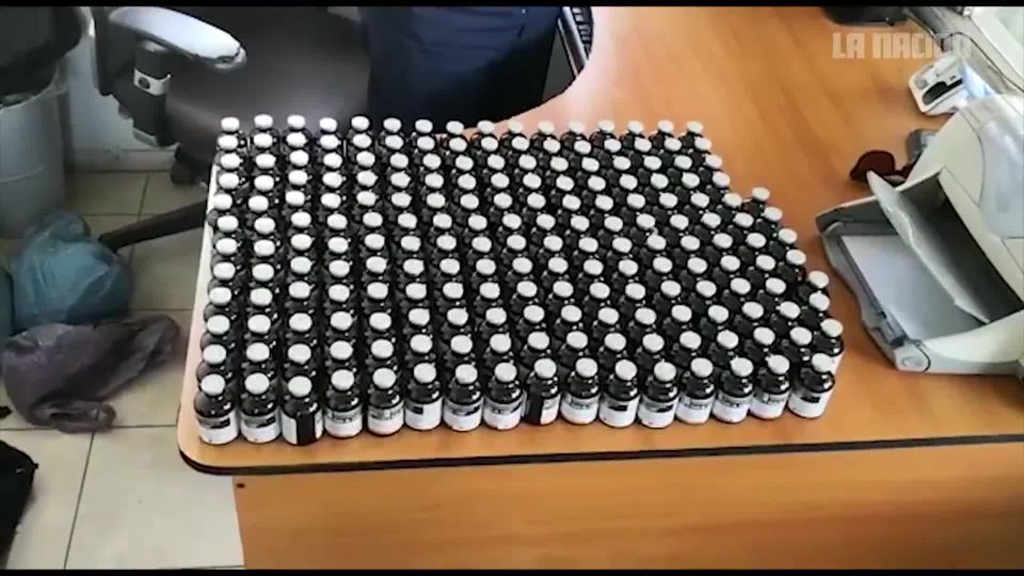 A report prepared by the Department of Analytical Chemistry of Forensic Sciences of the Organismo de Investigacion Judicial (OIJ), states that ketamine appeared as a drug in the second quarter of 2013, in 2014 it went unnoticed, while in 2015 and 2016 it emerged again.

The cargos that are confiscated in Costa Rica usually come in bottles of different sizes, the majority of 50 milliliters, which is equivalent to about 100 doses each.

A single dose of ketamine can be obtained at ¢3,000 colones, according to the ICD records.

For Araya, the most worrisome, besides the high traffic, is the list of illicit substances that young people consume, who often mix different drugs in their recreational activities.

Araya calls this “policonsumo”, that is to say, that the young in Costa Rica do not necessarily consume a single substance, mixing up it, each generating secondary and adverse effects that a risk to health.

What is the effect ketamine?

Common side effects include agitation, confusion, or hallucinations as the medication wears off. Ketamine used as a recreational drug has been implicated in deaths globally. Unlike the other well-known dissociatives phencyclidine (PCP) and dextromethorphan (DXM), ketamine is very short-acting. It takes effect within about 10 minutes, while its hallucinogenic effects last 60 minutes when insufflated or injected and up to two hours when ingested orally.

At subanesthetic doses — under dosaged from a medical point of view — ketamine produces a dissociative state, characterised by a sense of detachment from one’s physical body and the external world which is known as depersonalization and derealization. At sufficiently high doses, users may experience what is called the “K-hole”, a state of extreme dissociation with visual and auditory hallucinations.

Because of its ability to cause confusion and amnesia, ketamine has been used for date rape.

Legal use of the Ketamine

Ketamine is for veterinary medical use and, in accordance with Costa Rican legislation, must be registered with the National Animal Health Service (Senasa) for its legal use.

The Senasa stipulates that in order to bring it to the country, an application must be completed detailing the quantities and lot to be imported. In addition, upon arrival will be inspected, before being authorized to enter the warehouse of the distributor, where the data is incorporated into a logbook of controlled medicines.

According to the Senasa, veterinary clinics and hospitals must document the use of this product. The files are reviewed in the periodic inspections carried out by Senasa.

Meanwhile, the Ministerio de Seguridad Publica, registers it as a prohibited substance, which is why its transport or illegal possession is considered an infraction of the law on narcotic drugs, psychotropic substances, drugs for unauthorized use.

In article 73, the legislation stipulates that “a person who, without legal authorization distributes, trades, supplies, manufactures, elaborates, refines, transforms, extracts, prepares, cultivates, produces, transport, store or sell the drugs shall be punished with a penalty of eight to fifteen years in prison.

An analysis conducted by InSight Crime, “the sale of synthetic drugs in Costa Rica has been gaining ground and has become a window of opportunity for small drug traffickers.”

“Since its transportation does not require any major logistics and presents less risk than cocaine trafficking, for example, gangs are increasingly turning to ketamine,” says the report.

ICD: “The law has not changed, selling marijuana is illegal”