COSTA RICA SPORTS NEWS – New Zealand have reached the knockout stage of the FIFA U-20 Women’s World Cup for the first time by defeating Costa Rica 3-0 at the National Soccer Stadium in Toronto. 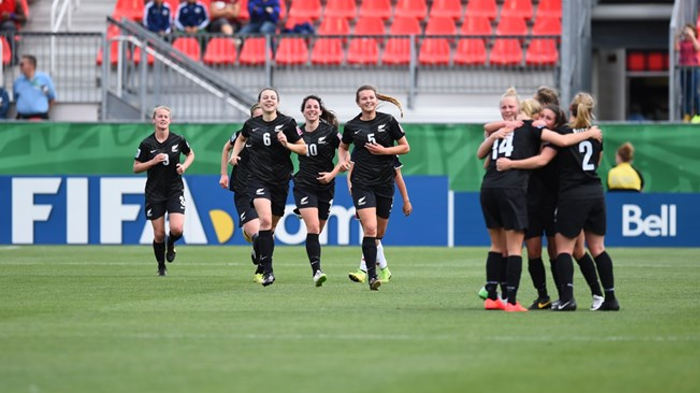 The sides had never met in any FIFA women’s competition before and the Costa Ricans were looking to go out on a high at Canada 2014 by winning their first ever U-20 Women’s World Cup match. The Junior Football Ferns, for their part, knew that victory would all but guarantee a quarter-final spot, and make them the first New Zealand women’s youth team to reach the knockout stage of a FIFA tournament.

New Zealand started off on the attacking front as they put pressure on Costa Rica’s backline. After six minutes, the team from Oceania had already delivered three corner kicks. However, the Central Americans, at this stage at least, were able to withstand the early pressure.

The breakthrough came in the 24th minute when Katie Bowen’s long distance free-kick found the head of Steph Skilton, who was able to direct a glancing header past Costa Rica goalkeeper Noelia Bermudez.

The Ferns continued to attack, with Megan Lee and Skilton creating chances from both wings. Las Ticas’ only chance, meanwhile, came at the end of the first half, with a shot from Viviana Chincilla from the edge of the 18-yard box just missing Lily Alfeld’s right post. New Zealand then had the last chance of the half when Catherine Bott stormed down the right side to shoot wide of the near post.

However, it was the Ticas who began the second period brighter, with captain Mariana Benavides forcing Alfeld to save from distance in the 47th minute. Eight minutes later, Anyi Barrantes missed a chance to equalise when she shot wide. Costa Rica head coach Garabet Avedissian introduced another striker in Michelle Montero to try to change the game, but without effect.

New Zealand double their lead in the 69th minute when Lee capitalized on a missed clearance from Benavides and dribbled past Bermudez to slide in for the jubilant Ferns.

Despite going down 2-0, Costa Rica continued to attempt a comeback. The best chance came from Montero, whose header from a corner was saved by Alfeld. The keeper then went on to thwart Melissa Herrera to preserve her clean sheet.

The Kiwis then rubbed salt in Ticas’ wounds in the fourth minute of stoppage time when Tayla O’Brien scored from a corner after Bermudez failed to punch the ball clear. The win left New Zealand second in Group D and set to face Nigeria, while France topped the former section by defeating Paraguay 3-0 in Edmonton.

QCOSTARICA - Costa Rican President Carlos Alvarado is just another citizen when it comes to covid-19 vaccination, given his young age and good health,...
HQ

HQ - The Fuerza Publica (National Pollice) intervened an agglomeration of people on the outskirts of the Rincón Grande de Pavas school during the...
Peru

QCOSTARICA - Southwest airlines will add a new route to the Daniel Oduber International Airport, in Liberia, this time connecting with the city of...
Latin America