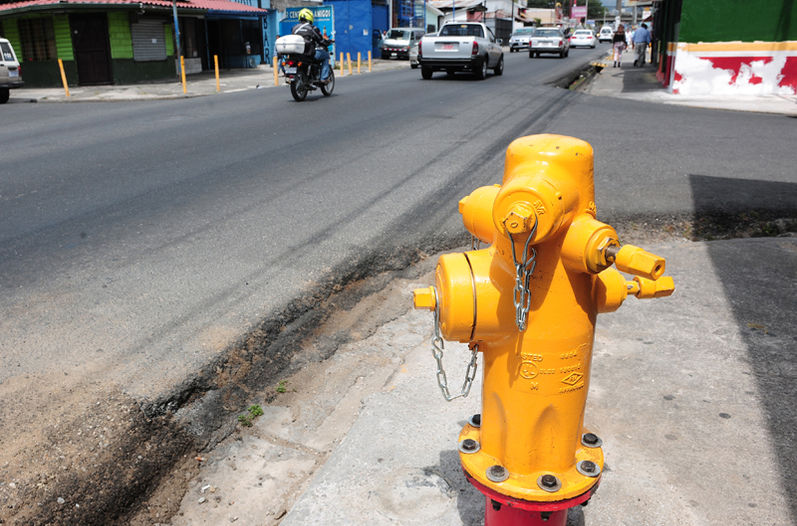 QCOSTARICA – Still missing are some 2.900 of the 12.000 minimum fire hydrants required the Cuerpo de Bomberos (Fire Department) to properly provide security in the event of an emergency.

The minimum number is an estimate made in 2008, when the Fire Hydrant Law (Ley de Hidrantes #8.641) was created. However, so far only some 9.100 have been installed.

The legislation provides that the network development, installation, operation and maintenance of the hydrants are the responsibility of the operators of distribution systems of drinking water.

That is to say that the installation and maintenance falls in the hands of the Instituto Costarricense de Acueductos y Alcantarillados (AyA), the Empresa de Servicios Públicos de Heredia (ESPH), and the local municipalities with their own aqueduct.

To date, there are six municipalities blacklisted, because they haven’t installed hydrants, nor charge their customers the tax. They are: Dota, Nandayure, León Cortés, Jiménez, Alvarado and Abangares.

Dota and León Cortés mayors, say they have several hydrants installed and have financing for more, but for various reasons, including lack of consensus and administrative delays, still lack rates for customers. “We do not charge the tax, but we have installed 10 hydrants within the canton and the plan is to have 18 at the end of the year. The rate is up to the municipal council… Yes, we are complying with the law,” Dota mayor Leonardo Chacón told La Nacion.

The concern of the Bomberos is that when a fire occurs they do not have close and/or good access to water.

“This is an issue of protection for citizens … we call on municipalities to install them, which will improve our ability to respond,” said Alex Solís, head of engineering at Bomberos.

To comply with the law, the AyA and the ESPH – the two largest of all aqueducts – are committed to installing and repairing hydrants. In the case of the AyA, the committment is 500 new hydrants a year and maintenance to 1.000. At the ESPH, the commitment is 100 new a year.

Francisco Angulo, ESPH spokesperson, said his company is the only one that is 100% in compliance with the legislations. “In 2014, we installed 102 hydrants and replaced 41 in a network of more than 1.000,” said Angulo.

According to the Regulatory Authority for Public Services (Autoridad Reguladora de los Servicios Públicos – ARESEP), the AyA receives ¢15 colones per cubic meter of water consumed, while the ESPH receives ¢20.

- Advertisement -
- Advertisement -
Paying the bills
Previous articleSemana Santa in Costa Rica 2015
Next articleGasoline Price Hike Approved: ¢31 For Super, ¢29 For Regular and ¢7 For Diesel