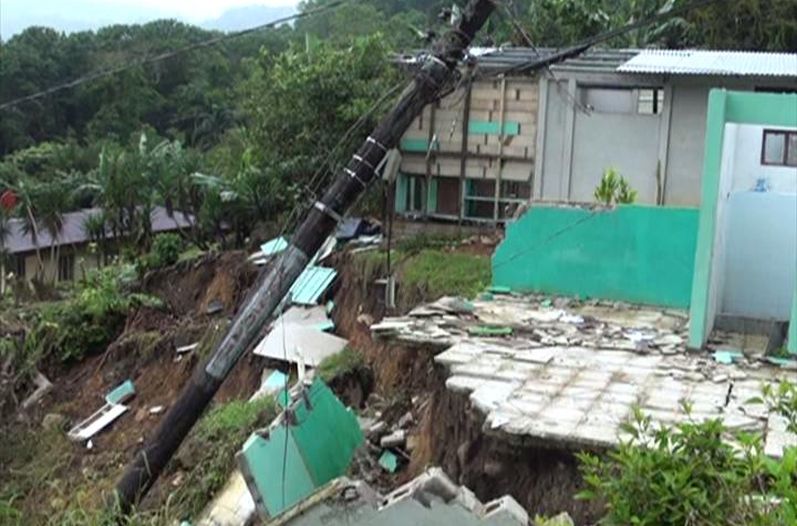 COSTA RICA NEWS – A series of earth slippages has so damaged the community center building in the village of Jesus Maria in Turrialba that the Health Ministry is closing it down, forcing the 11 children using the center as a school to go to nearby schools, the nearest two kilometers away.

The Ministry order to evacuate the building and to demolish it is opposed by local board of education president Gisella Pereira who filed an appeal against it, although she said she realizes the risk.

The earth movements have plagued the village for a decade. Pereira told La Nacion that a tiny school building once existed there but it suffered the same fate for the same reason. Every time it rains hard the townsfolk hold their breath, fearing even more damage.

Turrialba area produces many farm products with its rich soil but unfortunately that very soil is unstable and the area mountainous. It is also prone to earthquakes which, although not necessarily strong, are amplified by the instability of the topsoil.

Cracks in the terrain of Jesus Maria have been common and no one paid them much attention until 2007 when residents noted their homes were sinking and it appeared that everything was slipping down the mountainside.

Today, few families remain in Jesus Maria, most having abandoned their homes and moved elsewhere. Seven years ago the National Emergency Committee declared the once lively village uninhabitable. It had once a police station, a soccer field and a church which still stand today.

“How it hurts to see the town and now they call it a ghost town,” said Pereira. A few couldn’t stand to leave. Maria Gomez, 72, did abandon her home three months ago but returned a few days ago to visit the old place after a series of rainstorms hit.

“I live with my husband in Picayitas,” she told La Nacion, She found it much worse to see how her old home had changed. She said there had been promises of relocation but instead the families had had to move with their own resources.

ICE, the electric company, has been forced to replant its poles because the ground in which they are set will not support the weight. Most of those remaining are poor and find the prospect of paying rent in a new town daunting. Now they’ll have to send their kids to a distant school.