Leaving It To The Last Minute, Long Lines For Plates Changeover

In typical Costa Rican fashion, owners of vehicles with license plates ending in “1” left it to the last minute to make the mandatory changeover, enduring long lines at the National Registry (Registro Nacional) the avoid fines starting on Friday. 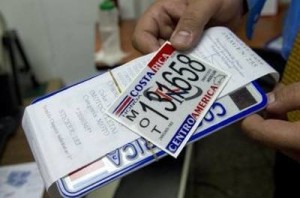 The deadline for the number 1 ends tomorrow, October 31. On Friday, and for the following three months, owners of vehicles with license plates ending in “2” will be required to make the change.

That leaves 27.565 plates still to go. But the number of unchanged plates could actually be lower, as that number includes all registered vehicles, and does not take into account vehicles no longer in circulation but never unregistered.

The mandatory changeover of license plates began on July 15. Each number has three months according to a program that ends in January 2016 with the number “0”.

The changeover can also be done at the Banco de Costa Rica (BCR) and Correso de Costa Rica (Post Office) locations, with an additional cost of ¢5.000 and more for delivery.

QCOSTARICA - The contagion rate of covid-19 in Costa Rica in the last week did not change, a fact that is seen for the...
Tourism

QCOSTARICA - This Sunday, the Guanacaste Airport - a member of the VINCI Airports network - received the first of the daily flights from...
Front Page

QCOSTARICA - Puntarenas is the only province in the country that has a contagion rate or "r" rate greater than 1. This is detailed in...