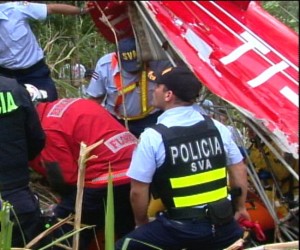 A small plane crashed near the Tobias Bolaños (Pavas) airport Saturday afternoon, hanging over the Torres river, between Pavas and La Carpio.

The accident occurred at about 5pm, when the small aircraft with the call letters TI ANR crashed after flying for a few minutes after taking off from the Pavas airport. Mechanical failure is suspected.

The plane was been flown by Manrique Hidalgo, who suffered fractures and is in stable condition in hospital

Emergency crews had to use special equipment to get to the pilot as the plane was hanging in the river canyon. According to witnesses, the pilot appeared to have lost control of the plane before crashing.

This is not the first time a plane has crashed after takeoff at the small airport.

The last crash before yesterday was in October 2010, when a plane overloaded with 170 kilograms of cocaine crashed into the Torres river within minutes of take off.