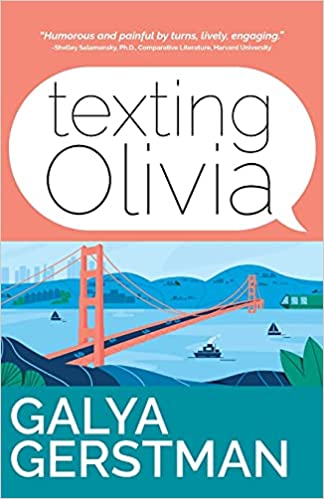 Thirty-five friends and family of the author attended to listen to a reading, excerpted below.

Texting Olivia is about a couple of empty nesters, Fay and Neil, who travel to San Francisco to help their daughter move out of her college dorm. Nothing, however, goes as planned, straining relationships and forcing Fay to re-evaluate her role as a mother, and also her role as a daughter to her own mother.

Galya attended the Barnard College Creative Writing program in New York City and later earned a Ph.D. in French Literature from Columbia University. She taught at Tel Aviv University in Israel before marrying and relocating to Costa Rica, where she raised three children and countless dogs.

Galya has written other books as well, which she hopes to have published in the future. She has also had articles published, including in QCostaRica.

Texting Olivia was published December 1 by Pleasure Boat Studio, a literary press. It is available in hardcover and paperback via Amazon and barnesandnoble.com and will soon be available as an ebook as well. The excerpt below is © by Galya Gerstman.

To be perfectly honest, Olivia hadn’t been an easy child. […] Olivia always needed something new, something fresh; she was constantly pushing boundaries. Like the time she told me she had a crush on a boy in her high school.

But that’s ok, isn’t it? At least I was trying. Cut me some slack—I was born in the ‘seventies. This was all new to me. When she would tell me that one of her peers had just come out to the class, I was always shocked and impressed that we as a species had come so far. In my time, you couldn’t even admit you went to dance classes if you were a high school boy, or that you could fix a car if you were a girl.

Guys couldn’t even wear purple without getting beat up after school. In the end I forced myself to imagine Olivia kissing another woman and realized I could be fine with it. I’d be happy with whoever could make her happy. Good luck to them, ha ha! I thought. Just try and keep up. As it happened, Colin decided he wasn’t into her. She cried to me. “Even guys who used to be girls don’t find me attractive!”

She still cries to me from California about one thing or another. If it isn’t about her friends, it’s about boys. What did Scott mean when he said he had had a good time? Why hadn’t he said he’d had a great time? Or else it was about her work load. She couldn’t cope, it was too much. Everyone finished their work on time except her. She was incompetent. Or if it wasn’t about the quantity of work, it was about its quality.

She wasn’t good enough, creative enough, driven enough. Artists, I sighed to myself. So sensitive. And what could I do, since she was over there in San Francisco, California and I was over here in Piscataway, New Jersey? Still, if you can’t cry to your mom, whom can you cry to?

Well, I didn’t cry to my mom when I was a teen, because we didn’t have that kind of relationship. Sophie was a good mom, I guess; I mean, she put food on the table and clothes on our backs, but she was not a particularly sensitive mother. Whenever I would voice doubts or fears as a child or teen, she’d chide me not to be so silly or so stupid, in those words exactly and in a tone of disregard or outright scorn. She didn’t see it as being mean; she simply thought or rather knew that my problems were insignificant. They were not real problems like poverty or war, both of which she had suffered. My problems were comfy, middle-class tribulations: my hair was frizzy, I missed my show on TV, and the like.

Olivia’s difficulties were similarly benign to my weathered worldview, but to her they were dire enough to bring her to tears. I never dismissed them—I never dismissed her—and I never added insult to injury by telling her she was stupid to feel so horrible. Instead I tried to share her sorrow, as if I could absorb her pain and thus lessen it, and sometimes it seemed I could. Sometimes it seemed by taking on her sadness I was lightening her load. Sometimes I even had words of wisdom to help her plow through. I always prided myself on at least trying my best to soothe her worries, unlike my own mother for me, and to field with an open mind whatever she would throw at me.

Olivia: Guess what mom? I did a photo shoot!
Me: A photo shoot? Like for a magazine?
Olivia: No it’s this guy who’s a freelance photographer and he does these arty photos that he posts on his blog
Me: Cool! Can I see them?
Pause.
Olivia: Um I’m not so sure you’d like them
Ding! Ding! Alarms are ringing.
Me: Why not? What kind of photos are they? They’re not nude photos, are they? (Bile is rising up my throat.)
Olivia: No. Not nude
Phew!
Me: So?
Olivia: Well he gave me these costumes. They were really pretty, lots of gauze
Pause again.
Me: And?
Olivia: Um you might find them a bit skimpy. Like you can see my bra and underwear
Me: Your bra and underwear show through the costumes?
Olivia: They sort of are the costumes, with this delicate fabric swirled around me
Me: Oh my God, Livy, is this guy legit? Are these photos going to appear all over the internet?
Olivia: No, he has this blog but he said he wouldn’t use any photos without my permission
Me: Oh, he said that. Did you sign anything? Did he sign anything?
Olivia: Mom he’s a good friend of Stephanie’s! And he’s an artist. Anyway it was a completely different type of shoot
Me: Different how?
She doesn’t answer. Shit.
Me: How exactly were you posed, Olivia?
Olivia: Well I was sort of… tied up
Me: What?!
Olivia: But not in a weird way! It was very artistic!

She finally agreed to send me some, and I quake to think what the other photos looked like if these were the presentable ones. It looked like a harem in hell. If anyone ever sees them! I thought, and made her promise never to do anything like that again without talking to me first.

But of course the next time it will be something else, something completely different but similarly obscene or insane which Olivia will think sounds like a good idea. And which I will have to hide from my mother.

Galya’s book is available on Amazon.

By Galya Gerstman. The other day my friend Mark and I...
Read more

QCOSTARICA - Wednesday morning was a quiet morning in...
HQ