Local Pizzerias Give US Franchises Competition 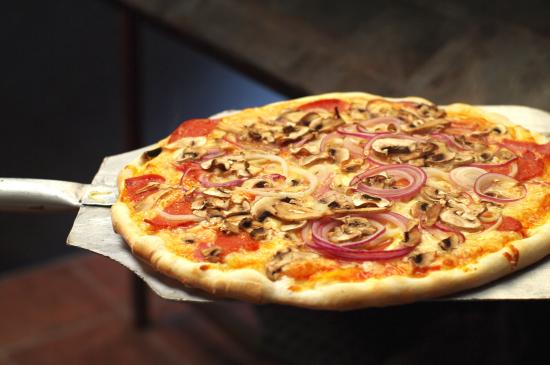 (QCOSTARICA) Local pizzerias are giving the big U.S. franchises something to worry about. With good pricing and excellent quality, the neighbourhood pizzerias, mostly located in residential areas, are earning customer loyalty.

The small pizzerias compete against the likes of Pizza Hut, Papa John’s and Little Ceasar’s.

In a report by La Nacion, two small pizza chains, Oteros Pizza and Monster Pizza go head-to-head with the big names and usually win out on customer loyalty.

Claudio Otero, who at 19 worked for Pizza Hut after 4 years at a small pizzeria, opened his first in 2003 and now has six pizzerias from San Jose to Cartago, with plans to open in Heredia and Santa Ana in 2018.

Otero says his success is due to quality.

Meanwhile, Monster Pizza opened its first store 13 years ago and currently has four. The most recent is in Coronado, which opened just three months ago.

Gabriel Valverde, general manager of Monster Pizza, told La Nacion that his company has opted to locate mostly in residential areas because it allows them to cover a larger population, keeping his costs low when compared to big commercial centres. Valverde feels his pizzeria chain is well positioned and has earned customer loyalty, not only for their oversized large pizza (their trademark) but for taste and price.

A favourite at the Q is L’Italiano’s in Santa Ana. Their only store is located on the road to Cuidad Colon. Their pizza tastes best from Sunday to Thursday with their 2 for 1 offer. You can read our report here.

What do the US franchises think?
When placed together, the local pizzerias are the “most important” competitor to the US chains.

Pizza Hut was the first to enter the market, in 1972. Today it has 60 locations, from table service restaurants (including several with the red roof), home delivery, food court and mobile, employing 1,250.

Jorge Gutierrez, general manager of Pizza Hut, says their strategy is to continue making our products more accessible in different markets and socioeconomic levels. “We give more value for their money to customers through special promotions and products, such as 2×1 Tuesday, Big Quatro and more,” explained Gutierrez.

Little Caesars, which began operations in the country in 2014, has currently only four stores, but plans to have 18 within five years, is another company that recognizes the impact of the local pizzerias.

Virya Navarro, marketing manager at Little Caesars said, “the rise of these businesses does affect the big chains, but you have to understand that the market is very large and for everyone.”.

Aware of the situation, Little Caesars is planning a Hot-N-Ready program that involves immediate home delivery of their pizzas.

At Papa John’s the focus is on quality, according to Gabriela Cordeo, spokesperson for the brand in Costa Rica.

The chain entered the Costa Rica market in 2000 and currently has 22 stores and more than 200 employees. “Quality, customer service and consistency in both, with the promise of the best ingredients, the best pizza,” said Cordero.

Eating pizza was a luxury in Costa Rica. In the past, Costa Ricans considered eating pizza as a luxury. Dining at a Pizza Hut was a family event and an expensive one.

But that has changed.

Names That Came and Went
Names you no longer see in Costa Rica are Domino’s, 241 Pizza and Pizza Pizza, all three failing miserably in the country.

Domino’s finally close its operation in the country in June this year after a troubled time in Costa Rica since its arrival in the 90s. The franchise was purchased by Oscar Cabada in 1997 with one store and 24 employees. In 2006, Cabada sold the franchise to Younger Generation Enterprises, and sold again in 2009 to Grupo Mozzarella (BGM), for a reported “not more than US$10,000 dollars” (no misprint) and a year later closing down its three stores. The company blamed the pizza price war. The franchise was revived in only to close down again.

241 Pizza in the late 90s was a force in the country, with their “always one free” stores popped up all over the San Jose area. My recollection was the location in Escazu, where the KFC now stands and the big store on Paseo Colon, where the Registro Civil is now located.

The Canadian franchise chain of pizza restaurants headquartered Toronto, Pizza Pizza, had a run at Costa Rica in the mid 90’s. The franchise tried to enter the local market, its landmark location was diagonal from the La Sabana park, that later became the offices for the LACSA airline. The location is currently a vacant lot.

The Most Successful U.S. Fast-food In Costa Rica

QCOSTARICA - The vehicle restriction of odds and evens...
Lighter Side