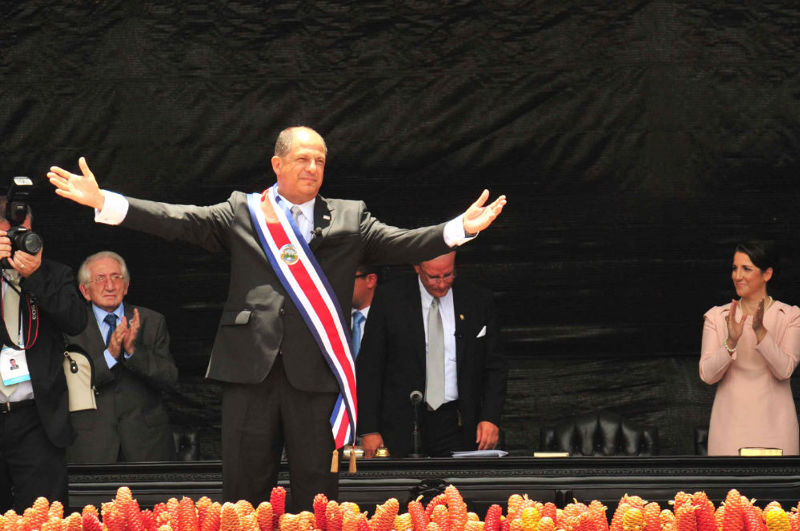 Costa Rica’s 47th president, Luis Guillermo Solís, elected on the promise of change said in his first speech to the nation after being sworn in at noon today to resolve the country’s fiscal deficit within two years.

The new president said that the fiscal deficit threatens the economy and perhaps the biggest challenged to face his administration.

“We need to resolve the deficit within two years, maximum”, said Solís before thousands of supporters at the National Stadium, after receiving the presidential sash from Henry Mora, president of the Legislative Assembly, who received it from Laura Chinchilla.

On the list of promises by Solís will be seeking to reassure to investors about Costa Rica’s business climate after the announcement of the departure of Intel and Bank of America and the cut of 3.000 jobs from the country, saying they wanted to consolidate operations elsewhere. 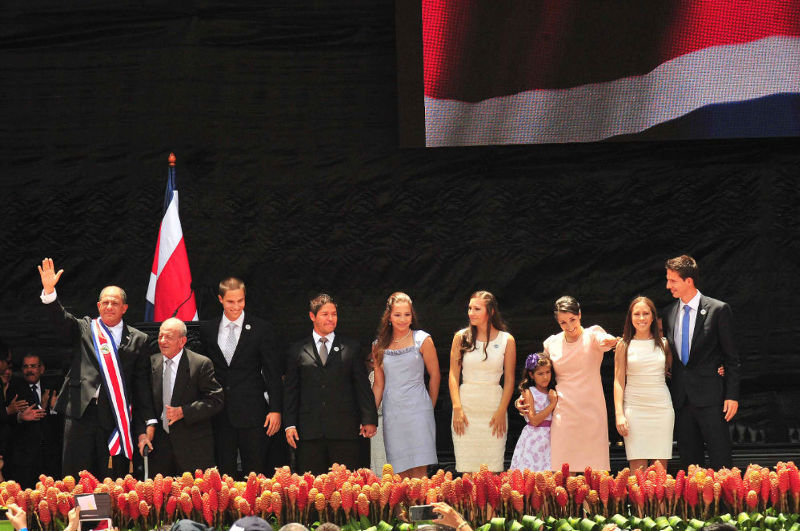 As promised earlier this morning on live television to keep is speech short (under 30 minutes), he took the stadium at 11:52am and closed by 12:24pm.

The President, in his speech, promised to govern “with simplicity, frugality and transparency” and announced that his government would be willing to be accountable every day and be audited alike.

Solis cited the fight against extreme poverty and a commitment to reduce electricity rates paid by households and business.

The new president faces an economy with a US$45 billion dollar budget deficit that is forecast to grow this year by 6% of the gross domestic product.

According to Bloomberg, Costa Rica’s economy expanded 3.1% last year, greater than the average of 2.4% it tracks. Incoming Banco Central (Central Bank) President Olivier Castro, who will be sworn in tomorrow, said in an April 22 interview that he expects the economy to expand 5 percent in 2015, more than double the 2.2 % outlook by Citigroup Inc., which cut its forecast after the Intel and BofA firings.

Costa Rica climbed seven sports to 102nd in the World Bank’s annual “Doing Business” report this year, lagging behind China, Vietnam and Namibia. Moody’s Investors Service lowered its outlook on Costa Rica to negative from neutral in September, citing a rising debt burden and widening budget deficit. Moody’s rates the country Baa3, putting it in the same category as Turkey and Iceland.

Another challenge facing Solís is a fragmented Legislative Assembly, with only 13 of 57 legislative seats, the Partido Accion Cuidadana (PAC) has to make deals to obtain a majority. The Partido Liberacion Nacional (PLN) hold the single largest bloc of legislative seats, 18, while the Frente Amplio has nine and the Partido Unidad Social Cristiana (PUSC) won 8 in the February 2 elections.

Today, Friday, June 18, vehicles with plates ending 9 & 0 CANNOT circulate The measure is countrywide and applied between 5:00 am and 9:00 pm,...
Rico's Digest