Matt Graham, the star of Discovery Channel’s DUDE, YOU’RE SCREWED  program who recently dropped in the jungles of Costa Rica is kind of in trouble with the country’s Tourism Board. 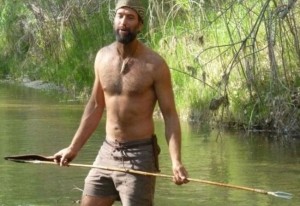 The episode that was filmed last year and recently aired in the U.S.h as primivite skills expect, Matt Graham, deep in Costa Rica’s jungle.

The part of the film that irked Costarricense de Turismo (ICT) officials is where he attempts to spear an animal for his own survival. The clip shows Matt, after walking in the jungle for more than 50 hours without food, missing his target.

Hermes Navarr0, head of ICT’s Tourism Management, said he will be asking Discovery Channel for explanations.

“We don’t support such programs because it is not what we want to sell (promote) and will be asking explanations why they (Discovery) made such a film that does not contribute anything to the environment”, said Navarro.

According to Navarro, groups like Discovery that come to film in the country do not need to ask permission unless they are filming in protected areas or a public place. However, by decree there is a regulation establishing conditions for doing so.

Among them, the production company is required to pay US$1.000 for each day of shooting, half if for educational programs. The regulations also prohibit harming the flora and fauna of our country.

The Matt Graham episode was shot in the Braulio Carrillo national park, as identified at the start of the show.

“The day there are some kind of firm rules we would be very happy, to be honest, we’d like all who come here to shoot  a film for use abroad, to at least come by the ICT for some type of review”, said Navarro.

Navarro said the ICT was not aware of the Discovery Channel crew in Costa Rica.

In case you wanted to a proper translation of Dude, you’re screwed: in Costa Rica with would be: Mae, Estas Jodido.