The public relations campaign for Mexico’s militarized crackdown on organized crime and its effectiveness in restoring public security continued this week, but the data doesn’t back up President Enrique Peña Nieto’s claims.

The president assured Mexicans that on a national scale there have been important reductions in homicides, kidnappings and extortions while speaking at the inauguration of a new military barracks in the northern state of Coahuila on July 12, reported El Universal.

But although government figures show small decreases in kidnapping and extortion between January and May of 2016 compared to that period last year, homicides have increased by more than 15 percent, jumping from 6,706 in the first five months of 2015 to 7,743 in 2016.

Peña Nieto acknowledged that challenges remain in parts of the country, and that the military would continue to play a role in addressing those problems. The president told the Mexican people that the government wouldn’t stray from its main objective of restoring peace and tranquility, one of the promises that he campaigned on during his presidential bid in 2012.

He also highlighted that the government crackdown on organized crime has netted 100 out of 122 of the country’s most dangerous criminals. 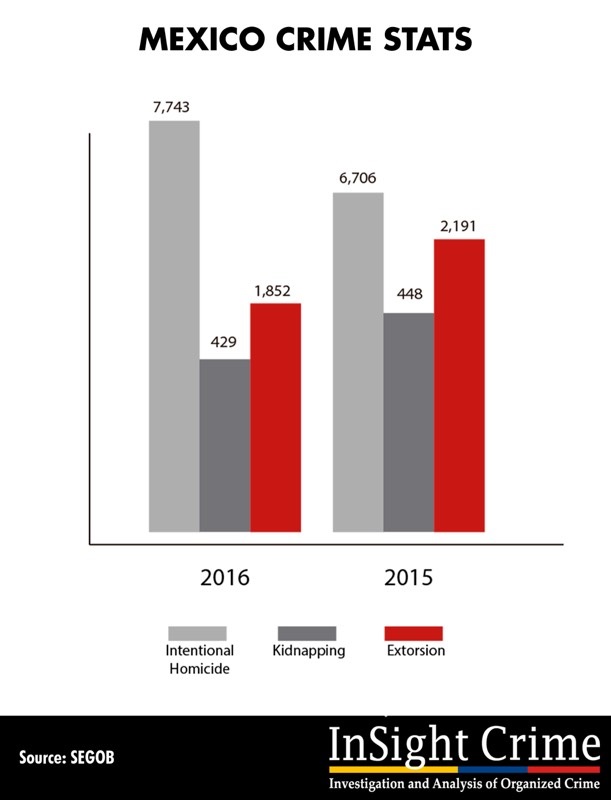 Peña Nieto and his administration have created fiction from facts before, and these latest claims are more of the same posturing at a time when the president’s popularity rating is low.

Despite the president’s assurances to the contrary, violence nationwide has been rising since 2015, reversing a downward trend that began in 2012, the same year Peña Nieto took office. Acapulco is currently one of the most dangerous cities in the world, while in Mexico’s northeast 14 people were murdered in one day last weekend. There was a huge spike in homicides in Colima last year, and after crying victory over calming Ciudad Juarez, an increase in murders there is threatening a comeback with the alleged arrival of legendary “narco of narcos” Rafael Caro Quintero.

Ciudad Juarez’s El Diario newspaper reports a month on month uptick in homicides there, raising concerns that killing in the border city could return to the hair-raising highs seen from 2008 – 2011.

Add to that mixed popular support for the approaching extradition of Joaquin “El Chapo” Guzman to the United States for trial. Three in ten Mexicans agree he should be sent north, three in ten think he shouldn’t, and the rest are undecided, according to a poll published by Animal Politico. The escape of Guzman — for the second time — from a high security prison in July 2015 was a major embarrassment for the Peña Nieto administration, which then caught him again in January.

Half of the people in the poll featured by Animal Politico think the main reason the drug trafficking boss is being extradited is that the government fears he may escape for a third time.

Given those factors, it’s understandable why Mexico’s president would want to create a positive view of the country’s current crackdown, which has been going for almost a decade since it was launched by Peña Nieto’s predecessor, Felipe Calderon, in 2006.

With some exceptions, Peña Nieto has largely stuck to the kingpin strategy begun by Calderon of bringing down leaders of organized crime networks. Although the Mexican government has proven adept at capturing drug lords, this strategy has also contributed to the fragmentation of Mexico’s criminal networks. The creation of more criminal actors makes violence even more difficult to eradicate because it is hard to establish anything resembling a tacit consensus on rules and norms with so many different players in the game.

If the current trend in rising violence continues, Mexico’s president will find it increasingly hard to claim otherwise.

- Advertisement -
Paying the bills
Previous articleGuatemala Business Tycoon Busted for Tax Fraud
Next articleUNESCO Declines to Consider in Danger in Talamanca-La Amistad, Located In Part of Panama and Costa Rica