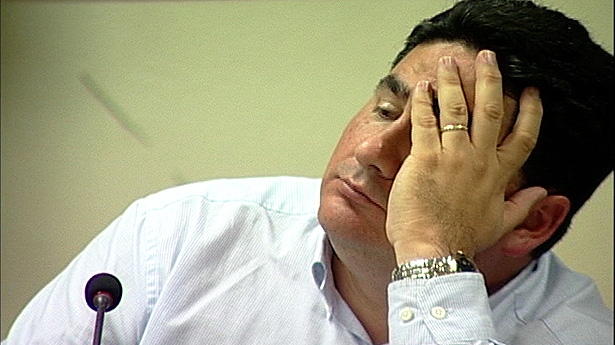 The photo says it all, as the ministro de transportes, Pedro Castro, visited the community of San Ramòn Friday night to face residents about their concerns of the San José – San Ramón construction, mainly the cost of the tolls.

Among the concerns raised by the residents attending the meeting were the expansion to four lanes – two in each direction – of the section of road between Manlos and San Ramón and the cost of the tolls, about ¢4.000 coloes for a round trip for a passenger vehicle.

Despite the unease of residents, minister Castro confirmed that there will be no changes on the construction plans.

The minister did say that there is the possibility of a toll reduction which will be up to the Autoridad Reguladora de los Servicios Públicos (Aresep) to set the rates.

The opinion of the majority of the residents of San Ramón and the areas of Grecia, Sarchi, Naranjo, Palmares and Atenas is that the project – the tolls – would negatively impact many families.

The mentioned areas are a sleeper community for many who travel to and from San José daily, which based on a 20 day a month work week, would add ¢80.000 colones monthly to their transportation costs.

QCOSTARICA - A total of 24 travelers, so far, face problems with the law when discovered trying to leave Costa Rica, through the San...
Colombia

Q COLOMBIA – In less than two weeks, Colombia enters its first rainy season of the year, which will very possibly have an increase...
San Jose

QCOSTARICA - Public worker unions from the Education, Health, Judiciary, Transport, and public universities, among others, will join forces this Friday, March 5, in...
Immigration

UPDATED: The DGME confirmed that anyone entering the country on or after December 17, 2019, will be allowed to legally stay until June 1st,...
Infrastructure

QCOSTARICA - The Ministry of Public Security (MSP) reported on Friday that, in a period of two weeks, 47 travelers have tried to leave...
Health

QCOSTARICA -  How has Costa Rica done during its first year in the fight against covid-19? If you ask the demographer Luis Rosero Bixby,...
Guatemala

Q24N - Guatemala on Tuesday received 200,000 doses of the vaccine against covid-19 donated by India, which it will use to complete the immunization...
Front Page

QCOSTARICA - Friday night, Costa Rica paid tribute to the memory of all the people who have lost their lives due to the pandemic...