In the not too distant future drivers at traffic lights in Costa Rica will more option to the basic red, yellow and green. A fourth light will tell you how many seconds left on the green light. 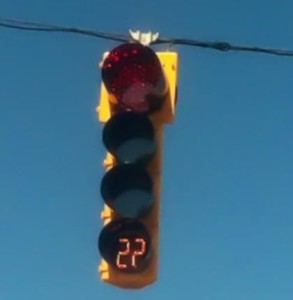 The change is part of a pilot plan by the Ministerio de Obras Públicas y Transportes (MOPT), with the first of such lights is already up in the area of Parque de la Paz.

The objective of the new lights to reduce the incidences of drivers “leapfrogging” lights.

The head of the traffic lights department at the MOPT, José Roldán, said the four light traffic lights will appear in the busiest intersections, as well as near schools and colleges.

Among the disadvantages is that the lights cost a little more than US$75 that traditional traffic lights and can be used by street racers.

QCOSTARICA  - Twenty eight Costa Rican's are lining up who want the position that Carlos Alvarado when he leaves office on May 8, 2022,...
Pura Vida

FINCA PARAISO (QCOSTARICA) At this time of the year many forested parts of Costa Rica are alive with the song of chicharras, cicadas. They...
Business

QCOSTARICA -Viatris, one of the largest generic drug manufacturers in the world, announced the opening of commercial operations in Costa Rica, with an initial...
Front Page

QCOSTARICA - This Semana Santa, if the number of daily new cases continues on its current trend, we will not see the harsh sanitary...
Pura Vida

QCOSTARICA - The quijongo is now in very good health thanks to the care of the people of Guanacaste, who are dedicated to protecting...
Pura Vida

QCOSTARICA - To commemorate the Bicentennial of Costa Rica that occurs in 2021, Inverse Project has designed the Torre del Bicentenario for this important...
Economy

QCOSTARICA - The International Monetary Fund (IMF) finally said yes to the loan for almost US$1.78 billion and to the fiscal adjustment commitment proposed...
Entertainment

The filming of the second season of the reality show “ReverseD” on the Discovery Channel officially began last Sunday, February 21, in Atenas, in...
Living in Costa Rica

QCOSTARICA - The Ministry of Public Works and Transportation (MOPT) announced Thursday that it will grant a grace period for six (6) more months...