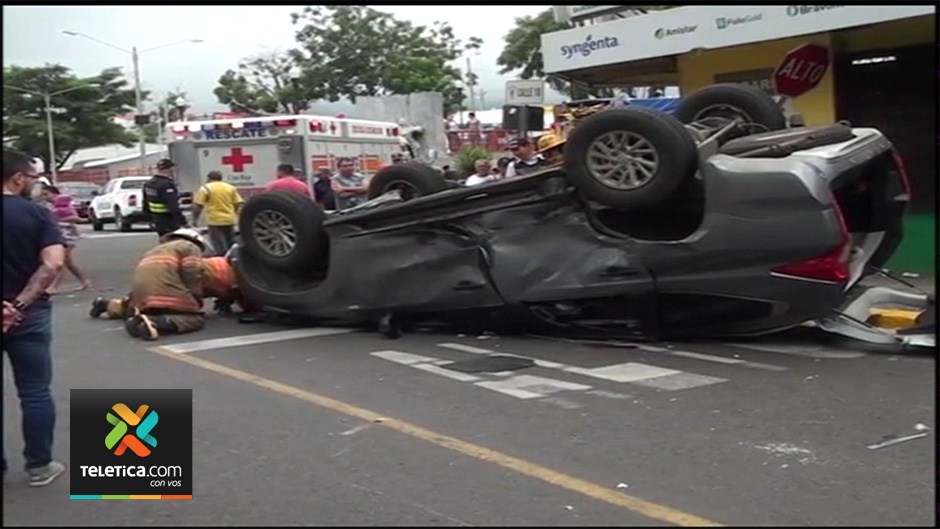 TICO BULL by Rico – The Q doesn’t normally report on traffic accidents. Impossible, not enough space on the internet to list them all.

But this one is to point of the growing problem of lack of respect of traffic lights and stop signs.

In this accident on Monday afternoon in Alajuela, three children and two adults were injured, own of them taken to hospital in “delicate” and another in “serious” condition, when one of the vehicles jumped the stop sign.

The blow to one of the vehicles was such that it turned it upside down. Bomberos (firefighters) had to use specialized equipment to extricate the trapped passengers, multiple ambulances were needed to take the injured to the nearby Alajuela hospital

This accident occurred southwest side of Cristo Rey Park in Alajuela, the scene of many accidents while transit authorities do nothing, probably still studying the accident reports, doing their measurements (I am sure you’ve seen them with their tape measures, measuring), while accidents continue to pile up.

But, let’s not be too quick to blame authorities.

While it can be said that poor or lack of traffic engineering, road designs that lack safety measures and so on are all around us, in the majority of the cases the fault is at the hands of the morons behind the wheel.

I see this all the time, drivers who have no idea what “defensive” driving is. Put the foot on the gas (accelerator), go as fast as you can, slam the brakes and it’s the other guy’s responsibility to get out of the way.

For example, I live in an area in Santa Ana where the municipal road ends up on the Ruta 27, the San Jose – Caldera highway.

This access was blocked when the Ruta 27 was rebuilt, well it was really only a new coat of asphalt and the construction of tolls booths. However, within a short time the access was once again re-opened, as transit authorities gave up on trying to stop traffic having to make a sharp right turn (literally 90 degree turn) onto oncoming eastbound traffic barreling down at 100+ km/h (that is the speed on this section of the highway).

Here, constantly I am honked by the morons behind me urging to enter the highway. Never mind that there are two lanes of traffic coming at you, including big trucks and buses. I waved them over: take your chances morons. I am not going to end my life and that of others here, not today.

And they do. They go around me with “pedal to the metal” accelerating to 100 mp/h in Ferrari driving style, only to find a few hundred metres ahead a standstill. I know because I am later than sooner behind them, in the same congestion. And if not here, surely up further ahead, on the infamous “cuesta de Santa Ana” (the hill from Santa Ana to Escazu, where almost every day there are accidents, a couple of times a week serious ones and far too many like the one last week when a driver hit a pedestrian so hard one her limbs was almost 100 metres from the scene of the impact, some 20 metres from a pedestrian overpass.

What’s all this got to do with lack of respect of traffic lights and stop signs? Nothing.

In places like Santa Ana there are no traffic lights or stop signs. WTF? Yes, they physically exist, but the only time they are obeyed are in the rare times when a “transito” (traffic official) is in the area.

Most of my first hand experiences of late are in the area of Santa Ana/Escazu. But the situation is mirrored all over the greater metropolitan area (GAM) of San Jose. Several Facebook pages like Accidentes de Costa Rica give us a look at the stupidity around us all day.

Accidents do happen, can happen even to the best of drivers. But many of the accidents here are just plain stupidity caused by morons at the wheel who consider driving a right and that traffic signs and traffic rules are for others, not for them. 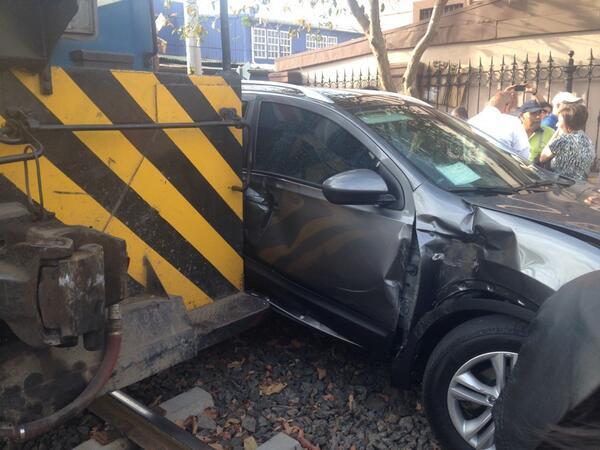 Oh yeah, forgot about the train. Don’t get me started there. The average is one and two accidents a week involving the train.

Something that has been on the books for the longest time,...
Read more

QCOSTARICA - It is reasonable to believe the major...
Politics