[BLOG] My Tale of the FJ Cruiser 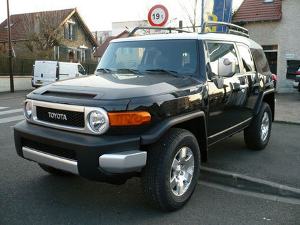 By Christopher Howard – I moved to Costa Rica in 1980 and never owned an automobile until 1997. As retirees will find out, public transportation is both plentiful and affordable here and one does not really need a car.

Anyway in 1996 I decided to import a 1990 Mitsubishi SUV. A friend, who is a car dealer, got it for me at a car auction in Florida for a rock bottom price. So, I imported it and ended up paying more in taxes than the initial cost of the car, but at least I knew what I was getting.

In 2006 I purchased a 2003 Toyota Prado land cruiser because my son was nearing the age to drive and I knew that I would eventually need a second vehicle. I also liked the first model of the Prado and had always wanted to buy one.

Both of my cars had manual transmission. I had always had stick-shift vehicles and after over forty years of using a clutch my left knee started to bother me each time I drove either of my cars. I had arthroscopic surgery on both knees as a result of being involved in running, martial arts, tennis and cycling most of my life. I told my orthopedic surgeon that my left knee hurt each time I used a manual transmission. He bluntly told me to buy a car with an automatic transmission so as to not exacerbate the problem I was having and cause further damage to my knee.

I had really become attached to my two cars but had no other choice but to take my specialist’s advice. First, I thought I wanted to purchase a new Toyota Fortuner SUV. You may view the car at this link newcarenginereview.com/toyota-fortuner-2013-model.html. I contacted the salesman who had sold me my Toyota Prado and asked him if he could locate a Fortuner. A few days later he sent me a picture of a car that he had found. I had a three week vacation scheduled to the U.S., so I left him a deposit to hold the car for me and told him I would buy it when I returned. The story doesn’t end here.

While is was visiting my sister in Washington state I noticed a lot of Toyota FJ Cruisers on the road. I talked to a couple people who owned them and they had nothing but good things to say about their vehicles. So, one day I went to a local Toyota dealership and test-drove one. It was a case of “love at first drive.” I just new I had to have one. The climate in Washington is similar in a way to Costa Rica’s weather in that it rains a lot. Granted Costa Rica is tropical but the road conditions can be almost the same. I knew the FJ Cruiser would be the perfect vehicle for Costa Rica. See this link to get an idea of what these cool vehicles are like: http://www.toyota.com/fjcruiser/?srchid=bing%7CSUV%2FVan_FJ_Cruiser%7C#!/Welcome

I basically had two choices, buy the vehicle in the States, have it sent by truck to a port and then ship it to Costa Rica. The car was a lot cheaper than it would be in Costa Rica. However, after adding up the transportation costs to port, taxes in the U.S., the cost of shipping the car to Costa Rica by boat and the taxes and license fees I’d have pay here, I opted to purchase the same car here. On top of that, I found out that I would have problems with Toyota honoring the warranty for a vehicle purchased abroad and that the version of the FJ Cruiser in the U.S. was calibrated for a different mixture of gasoline which could possible cause me headaches down the road.

I told the salesman at Toyota in San José, to forget the Fortuner and to try and get me an FJ Cruiser. Within a day he found me one that was slightly used with low millage and in such good condition that it still had the smell of a brand new car. I ended up pay cash for the vehicle as I had done with my other cars because I don’t like payments.

Needless to say I purchased a great vehicle and feel like a kid with a new toy. I know I will have fun driving it and that my FJ Cruiser will last me many years.

- Advertisement -
Paying the bills
Previous articleBars and Restaurants Will Offer the Best for Mothers
Next articleBLOG: Costa Rica Immigration Singling Out Americans? Tell Me It Isn’t So.

QCOSTARICA - The press must have access to public...
Consumption