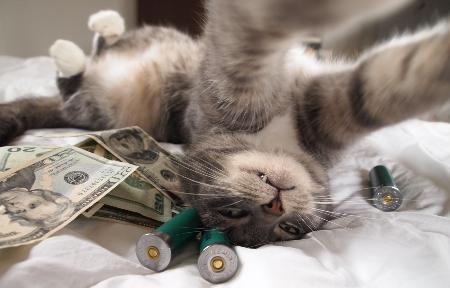 A group of inmates in the maximum security cell block of La Reforma , Costa Rica’s largest correctional institution, enjoy the company of cats that they take in as companion animals and eventually use as drug couriers, messengers and even as bargaining chips in conflicts among criminal groups. 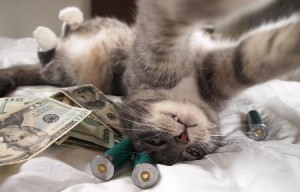 These cats travel freely through the prison and often carry marijuana, cigarettes, cash, and hand-written messages. These items are carefully concealed in the fur of the cats, and for this reason the inmates prefer to keep the fluffier breeds of Felis domesticus. The inmates have even set up a network of thick ropes between cells to facilitate the cats’ courier missions. These ropes, which are typically used to hang laundry out in the sun, connect cells and sections of the prison.

A report by daily tabloid Diario Extra, officials from Adaptacion Social (Social Reintegration) government agency are aware of the presence of cats in the prison. In Costa Rica, there are no provisions for companion animals to join inmates in prisons, but there are no rules against security guards or prisoners befriending stray animals. In most cases, the felines that arrive in prison are not house cats, but they enjoy the treatment given by prison staff and inmates and thus end up staying.

In the past, inmates at La Reforma kept dogs as companions. These animals were part of the million-plus street and community dogs that roam Costa Rica. The dogs ambled up to La Reforma looking for food, and kind-hearted prison staff would feed them and turn them over to inmates for companionship and therapy, which in turn made the jobs of the corrections officers easier.

Officials from the Ministry of Public Safety (Spanish initials MSP) and from Social Reintegration pretty much looked the other way when they became aware of dogs kept by inmates; however, there were issues of hygiene and illness that eventually forced canines out. Besides, inmates found that cats were more useful as drug couriers.

The oldest cat in La Reforma is Tiger, a natural-born leader that shows younger cats the ropes (literally). Tiger is six years old and masters all the confines of La Reforma. He knows places that inmates and prison guards do not know about. Tiger has also fathered many kittens that are either kept by the inmates or given to relatives or prison staff as furry gifts. Prison staff arrange spay and neuter procedures for these kittens.

Although Tiger is a male cat, inmates with long sentences prefer females because they can give them the joy of kittens later in their prison bids. There’s also a tactical advantage in the sense that by helping females raise their litters, they gain an ultra-loyal adult cat and can easily train kittens from a very early age to become drug couriers. Love, affection and nourishment are plentiful for cats in La Reforma, and they freely go in and out of the maximum security cells through a small vent. Their owners, however, are confined to their cells 23 hours a day.

The companionship of these felines becomes so important to inmates that they offer bribes to security guards when their cats need veterinary attention. The guards often turn down the monetary bribes and take the cat to the vet under the condition that the inmate be well-behaved.

In the case of Tiger, the bond between his inmate master “Indio,” who was later transferred to another section of the prison. The cell went unoccupied after five years, but Tiger refused to move and resorted to mewling loudly at night. Eventually he stopped eating, and prison staff decided to transfer another inmate to that cell, who is now taking of the cat. Tiger is now back to his old self, ferrying drugs, cash and messages around La Reforma.

Narco-kittens are sometimes victims of rifts between criminals over debts or wrongdoings. A prison informant told Diario Extra that cats are sometimes captured by inmates and relieved of their precious cargo, which can result in violent prison fights. These feline companions are very important in the lives of the inmates who keep them, and thus they are sometimes taken hostage and end up tied to the iron bars of the cells until their masters pay their ransom.

In one case, a cat was decapitated and hanged in plain view of the inmate master who had problems with the captor. This incident could have extended to human bloodshed had it not been by the intervention of corrections officers who reassigned inmates. Because of this occurrence, the National Animal Health Service (Spanish acronym: SENASA) is planning to look into the welfare of cats in Costa Rica’s prison system, which is quickly becoming overcrowded.

Besides Tiger, other cats that have lived in La Reforma for years include Furry, Darkie and Pretty Eyes. There is also an unnamed cat that has a fiercely independent attitude and refuses to stay in one cell or carry out courier missions. This cat does not fit the bill of a narco-kitten, and thus it simply roams around La Reforma in search of food and transient affection.