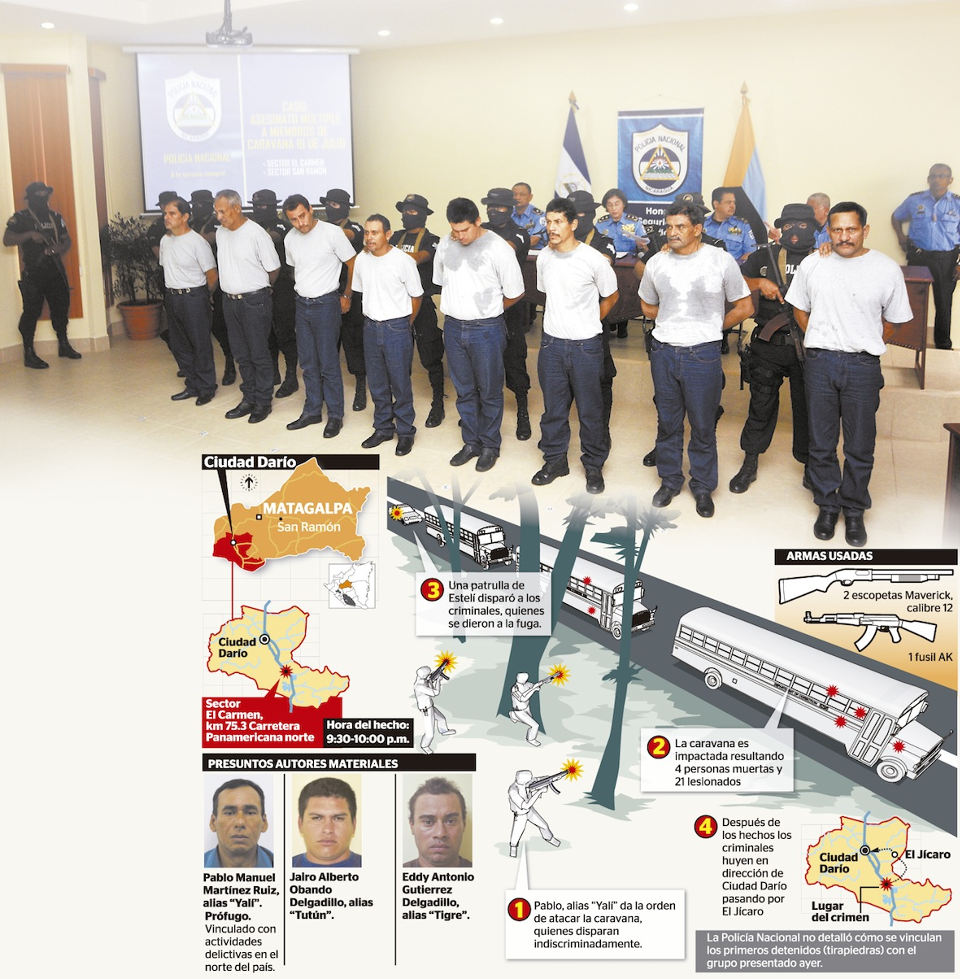 TODAY NICARAGUA NEWS – On August 7, Nicaraguan Police Chief Aminta Granera announced the capture of eight new suspects in the case, bringing the total up to 12, reported Spanish newspaper El Pais. According to Granera, detainee Jose Ricardo Cortes Davila, alias “Cobra,” is linked to the Zetas criminal group, reported La Prensa. He was allegedly involved in planning the attack and helped two of the suspects hide from authorities.

The attacks against Sandinista supporters, as they made their way back from celebrating the ruling party’s anniversary in Managua, were the work of “common criminals” and were not politically motivated, Granera stated.

“We have not found a single connection or piece of evidence indicating this was a political attack,” she said. “We don’t have armed groups with political ends [in this country].”

Granera said the suspects had been planning the attack since mid-June and that police did not know how they had acquired the military-grade weapons used in the operation.

The July 19 attacks, which resulted in five deaths and 28 injuries, remain shrouded in mystery.

The incidents occurred in Matagalpa, near an area where there have been reports of activity by armed groups. Shortly after the attack, a previously unknown group calling itself the Armed Forces for National Salvation – Army of the People (FASN-EP) claimed responsibility and indicated the attacks were targeting “the oppressor.”  However, the leader of a prominent re-armed “Contra” group — a reference to the rebel forces that fought the Sandinistas in the 1980s — denied involvement.

Three of the four initial suspects arrested and accused were reportedly members of the Sandinista National Liberation Front, the governing party, while according to La Prensa eight suspects are members of the political opposition.

Authorities both deny the current attacks had a political connection and insist armed groups operating in the country are purely criminal in nature — though the government’s severe response to these groups indicates concern over their motives and power.

As noted in El Pais, Granera’s comments leave important questions unanswered. Why were none of the victims robbed if the attacks were the work of “common crime”? Why would a man linked to the Zetas have been involved? Criminals tend to engage in violence for specific business ends, and what these might be is unclear.

Meanwhile, the handling of the case suggests authorities are desperate to see it closed. Human rights defenders claim police have violently dragged suspects from their homes with no arrest warrants, while an opinion piece in La Prensa described the case as a “witch hunt.” Family members of the accused claimed the entire case was staged by police.

QCOSTARICA - The multipurpose national stadium, the first modern sport and event arena to be built in Central America, located La Sabana. The stadium was...
Business

QCOSTARICA - The contagion rate of covid-19 in Costa Rica in the last week did not change, a fact that is seen for the...
Travel