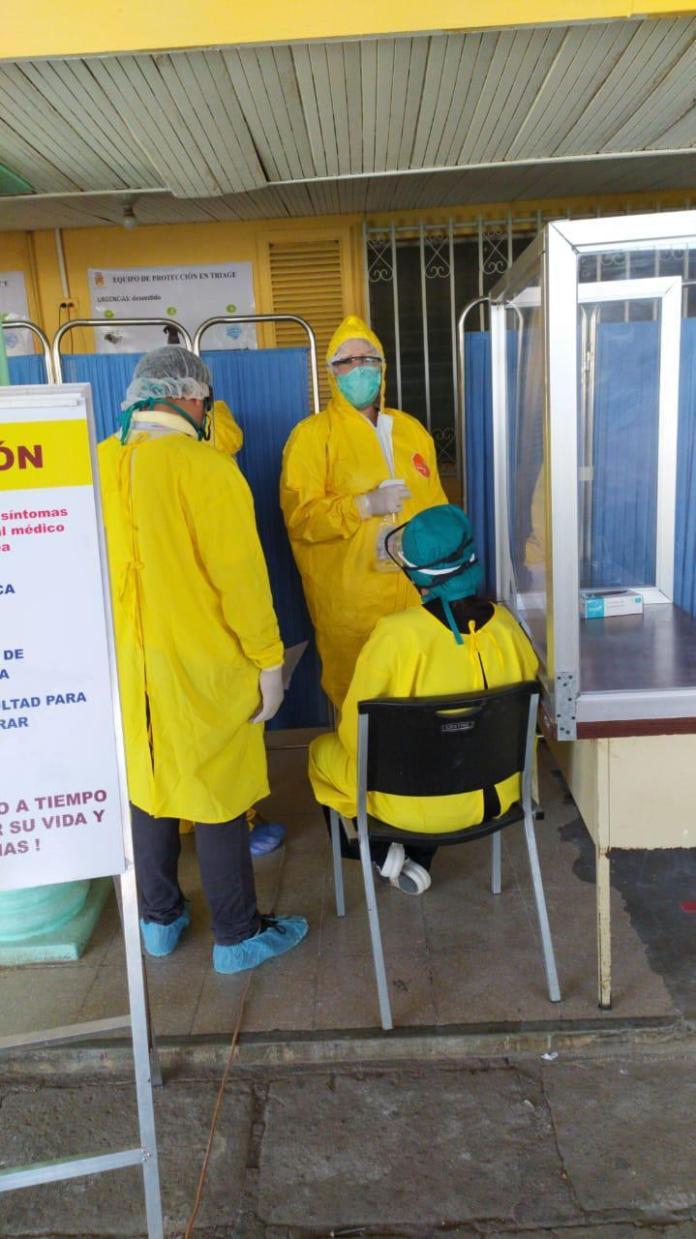 While the government of Daniel Ortega continues to deny the coronavirus epidemic has hit his country, Nicaraguans know the truth: there are many more cases of covid-19: suspicious, infected and deaths.

So far, government authorities have only acknowledged the existence of only 13 confirmed cases and at least 15 suspected and three deaths of covid-19. But the government does not include in its daily reports cases in private hospitals and deaths due to pneumonia.

La Prensa reports that it has learned that there currently at least 7 patients positive in the Hospital Monte España, that are not included in the official reports. The same source, says La Prensa, reported that one of the patients who entered the hospital in critical condition on Saturday, died early Wednesday morning.

La Prensa was able to confirm that the victim was a 58-year-old who worked at the Augusto C. Sandino International Airport in Managua and that on Saturday, April 25, he presented respiratory problems and was transferred to the Monte España hospital, where he was insured. That same night he had complications and was intubated.

The man’s neighbors told LA PRENSA, under anonymity, that the family members insist that he did not have Covid-19 and threatened to retaliate against those who say so. “But in the family it is clear what that was,” said one of the neighbors.

Before Saturday, the day man was taken to the hospital, he was seen walking through the neighborhood, without any obvious complications. This morning, after the news of the death, several grocery stores in the area have taken extreme measures. Some of these have been placing plastics on the gates and keeping a distance from customers.

This is the second worker at the Managua airport to die from Covid-19. The first died on Thursday, April 23, the death was officially announced by the Health authorities.

Back to the Monte España hospital, the source told La Prensa that the body of the 58-year-old man was removed from the back of the hospital in a hearse, the vehicle headed directly for the Cementerio Oriental (Oriental Cemetery), whose closed gates were opened only for the hearse and closed again.

Ordered to diagnose as “acquired pneumonia”

On orders from the Ministry of Health, patients are treated under the diagnosis of “community-acquired pneumonia.”

The source said that the situation in the medical center is complicated and that the staff is in fear because two specialists who have had contact with the confirmed patients presented the symptoms.

Specialists at the hospital are clear that the rapid appearance of cases is related to the fact that community transmission is already installed in the country, although the authorities of the Minsa, through its Secretary-General, Dr. Carlos Saenz, repeat every day that contagions are imported and denies local transmission.

Independent doctors who observe with scientific criteria the advance of the pandemic have assured that the country has more cases and that more will be known in the coming weeks when it is no longer possible to keep them hidden.

What is happening at the Hospital Monte España supports that prognosis ordered by the authorities.

The situation at the Monte España and other private hospitals was complicated by the visit of Health Minister Martha Reyes this past weekend, with hospital authorities given strict instructions on how to proceed according to government guidelines.

“The minister came on Saturday (24), visited the patients and spoke with hospital authorities,” said the source.

A day before the visit of Minister Reyes, the source said that one of the patients died and the day the Minister arrived they intubated the patient. The source said that at the beginning of the week, medical personnel “informed them that as long as the Minsa did not deliver the evidence, making cases like Covid-19 official, they should treat it as “community-acquired pneumonia. “It has been strictly forbidden to speak of the gravity”, the source confided to La Prensa

Some doctors from hospitals other than Monte España have said that although the Minsa does not diagnose the patient with Covid-19, they are treated for such. This is one of the most serious problems they face, since the Minsa maintains tight control over the testing and the results in order to maintain the numbers.

“There are patients that we treat without being certain of their diagnosis, this poses a danger to the staff and the patient,” laments the source.