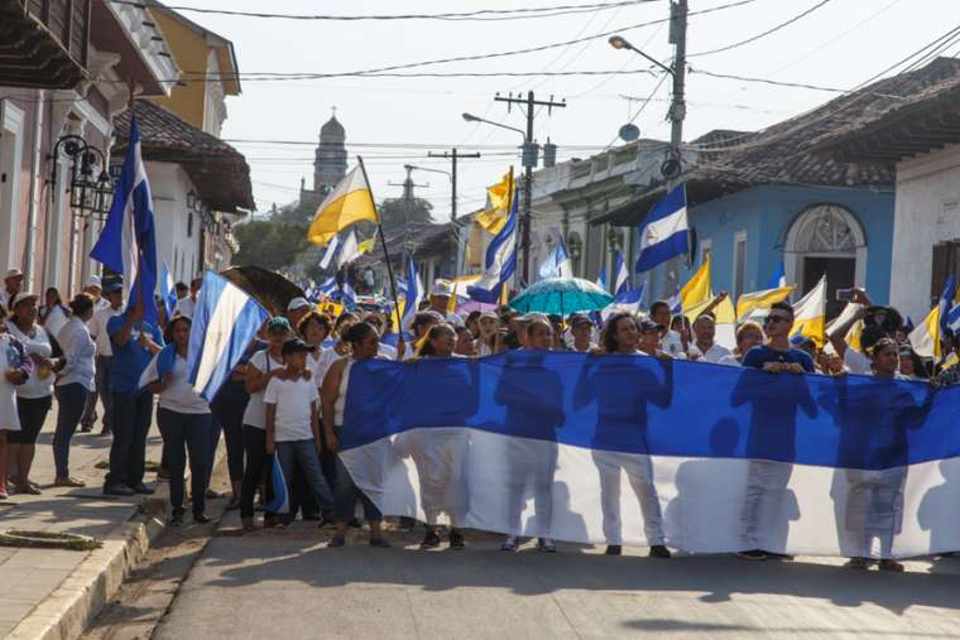 (ACI Prensa).- A video circulating in Spanish-language social media shows a group of political prisoners praying the Hail Mary while expressing their desire to see a free Nicaragua.

The country has seen widespead protests since April against the government of Daniel Ortega.

“Freedom for all political prisoners. Nicaragua wants freedom. I love the blue and white flag (of my country) and my constitutional rights to demonstrate have been violated. I love you Nicaragua. Be strong, I love you all, we love you all very much, Nicaragua,” says one of the prisoners after praying the Hail Mary.

“I greet all our relatives and friends. We really love you. We don’t want any more abuse of power. May justice be done, but truly so, which is guided by the Lord, not like what we have been getting lately,” he continues.

“Nicaragua wants freedom, it wants strength, it wants genuine peace. A true peace, like we citizens who love it. Long live free Nicaragua!” he concludes.

“I’ll see you free Nicaragua! I’m going to see you free one day,” says another one of the prisoners in the video.

Javier Espinoza, a sound engineer who was imprisoned and who is now free, related recently that the political prisoners in the El Chipote prison in Nicaragua are praying to have peace and strength.

“After they eat, they cry out from their cells “Let’s pray,” said Espinoza speaking to Canal 10.

“You feel like you’re in a church. It sounds so beautiful and gives you so much peace, in that loneliness, in that darkness, to be sitting there responding to the prayer, because it’s the only thing you’ve got left. They pray the Rosary, the Hail Mary. After the prayer some Christian hymns are sung. You feel you’re closer to God because of the conditions you’re in. Do you know what they say? and they shout it out, this is nothing compared to what our Jesus went through,” the soundman said.

Protests against president Daniel Ortega which began April 18 have resulted in more than 300 deaths, according to local human rights groups. According to the Nicaraguan Association for Human Rights, there may be as many as 1,300 disappeared persons.

The country’s bishops have mediated on-again, off-again peace talks between the government and opposition groups.

Nicaragua’s crisis began after Ortega announced social security and pension reforms. The changes were soon abandoned in the face of widespread, vocal opposition, but protests only intensified after more than 40 protestors were killed by security forces initially.

Anti-government protesters have been attacked by “combined forces” made up of regular police, riot police, paramilitaries, and pro-government vigilantes.

The Nicaraguan government has suggested that protestors are killing their own supporters so as to destabilize Ortega’s administration.

The Church in Nicaragua was quick to acknowledge the protestors’ complaints.

The pension reforms which triggered the unrest were modest, but protests quickly turned to Ortega’s authoritarian bent.

Ortega has been president of Nicaragua since 2007, and oversaw the abolition of presidential term limits in 2014.

The Church has suggested that elections, which are not scheduled until 2021, be held in 2019, but Ortega has ruled this out.

Ortega was a leader in the Sandinista National Liberation Front, which had ousted the Somoza dictatorship in 1979 and fought US-backed right-wing counterrevolutionaries during the 1980s. Ortega was also leader of Nicaragua from 1979 to 1990.

This article was originally published ACI Prensa. It has been translated and adapted by CNA.

QCOSTARICA - A 5.1 magnitude earthquake was recorded at...