He gets a little over a dollar for each of the hairy critters, which breeders sell overseas as pets.

His take may not be much, but in Nicaragua, a dollar buys a kilo of rice or a liter (quart) of milk.

And in just two weeks, Sanchez Hernandez, his aunt Sonia and cousin Juan caught more than 400 of the spiders.

The hunt is playing out in northern Nicaragua, which suffered severe drought from May to September. Sanchez Hernandez’s fields were a total loss.

The 27-year-old was skittish at first about poking around in underground nests, under rocks and in tree trunks in search of the feisty arachnids.

But he donned thick gloves and mustered up the courage, because the alternative was to see his family go hungry.

“It is the first time we have gone out to look for tarantulas. We were a bit afraid, but we sucked it up and did it because of the drought,” he told AFP.

Sanchez Hernandez has a wife and four kids to feed. His aunt is not well off, either—she is a single mother of five children, and was also hit hard by the drought.

Their loot secured, the pair traveled more than 100 kilometers (60 miles) to the outskirts of the capital Managua.

There, they handed the tarantulas over to Exotic Fauna, a firm that started this month to breed the spiders for export.

With approval from the country’s environment ministry, the company is hard at work, setting up glass cases with sawdust beds as part of a project to breed 7,000 tarantulas.

“We plan to sell them at a price even higher than that of boas,” which go for up to US$8 (RM27) apiece, said Exotic Fauna owner Eduardo Lacayo. 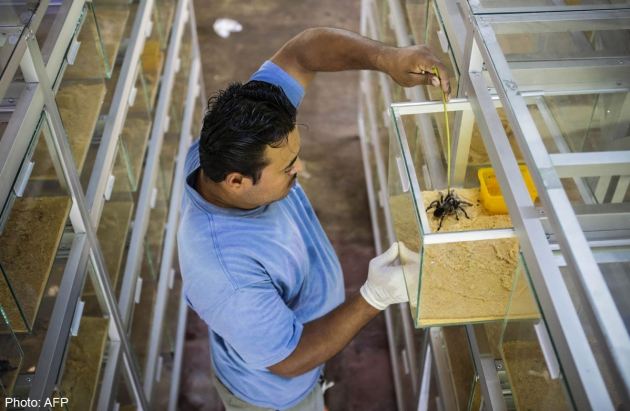 Lacayo has invested more than US$6,000 in the business. He got the money… from selling turtles.

Customers in US, China

Tarantulas are carnivores that eat crickets, worms and newly born mice that breeders drop in their tanks—one tarantula per tank, so they don’t fight and kill each other.

“It is easier to handle a boa than a spider,” Lacayo said.

Tarantulas are territorial and when they feel threatened, they bite and secrete a toxic goo that causes allergies and pain, he said.

The spiders abound in tropical and arid parts of Central America. Despite the fact that they are so common, lots of people are afraid of them.

Females lay about 1,000 eggs when they give birth. The larvae come out in sacs, which the mother places in a spider web. Of that load, anywhere from 300 to 700 will hatch.

“We have customers who have confirmed they want this kind of species,” Lacayo said, referring to clients in China and the United States.

Trade in tarantulas, which can live many years in captivity, is one of the ways Nicaragua is trying to diversify its exports by taking advantage of its rich biodiversity. The country is the second poorest in the Americas, after Haiti.

The first to get the bug was Ramon Mendieta, owner of an exotic animal farm in Carazo department, south of the capital. He sells around 10,000 tarantulas a year to clients in the US and Europe.

Mendieta, who has been at it for three years, says profit margins are thin because production costs are high. These costs include special care that the tarantulas need to protect them from parasites while in captivity.

But there is competition out there. Chile sells a species of tarantula that is less ornery than the Nicaraguan ones. Colombia and the United States are also market players.

“There are a lot of people that love to have them at home, some as pets and others because they like danger,” said biologist Fabio Buitrago of the Nicaraguan Foundation for Sustainable Development. — AFP

NYTimes  (MEXICO CITY) - As soon as the nurse...
Front Page