MANAGUA (QNicaragua) – Nicaraguan sex workers have for the first time set up an office to assist in protection from abuse, violence and discrimination. The goal of opening a bureau in Managua “is to have a space where we as women share experiences, plan goals and claim rights,” Maria Davila, coordinator of the Red Nacional de Mujeres Trabajadoras Sexuales (Retrasex) – National Network of Women Sex Workers, said.

The new office is located in a Managua neighborhood, 200 metres from a Catholic church. The office still lacks furniture and is manned by Davila, along with an accountant and a psychologist. 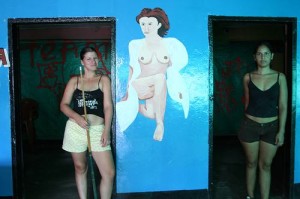 Davila says the purpose of the office is not to promote prostitution but to meet the social needs of a sector of the population that suffers from discrimination.

Retrasex is part of a Latin American and Caribbean network of 1,000 affiliates. Davila estimates that at least 11,000 women are employed in sex work in Nicaragua.

Retrasex is fighting to change the vocabulary used by media and official institutions to describe its members, preferring the term “sex workers.” Davila added, that sex workers are usually identified as street walkers, but are also in the nightclubs (strip clubs) as dancers, escorts for tourists or friends with a lot of money.

The organization also seeks to influence social, health and education policy, as well as push for rights for its workers.

“People do not look at this (prostitution) as a job, but we are clear that it is a job because this solves economic problems in homes, although relatives often do not know what girls do to earn a living”, says Davila.

One recent achievement was gaining a seat on the government’s National Commission for AIDS Care or CONISIDA, where it will receive training to prevent the disease.

Davila explained that there also agreements with the Procuraduría de Derechos Humanos (Office of Human Rights) to report to the authorities abuse from customers.

Between 2011 and 2012 seven sex workers were murdered in Nicaragua.

Prostitution is illegal in Nicaragua but authorities often turn a blind eye to it.

QCOSTARICA - The opening of the new section of...
National