Nicaragua Students In Washington To Ask For U.S. Support To Topple Ortega 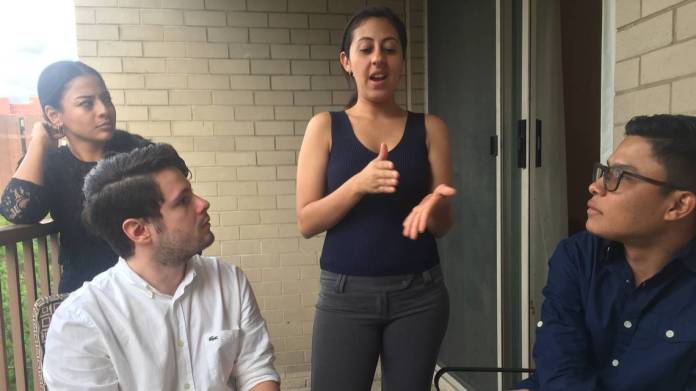 University students have emerged as the most potent opponents to Nicaraguan president Daniel Ortega and this week, three of them are visiting Washington to ask for help from U.S. President Donald Trump and Congress in toppling the autocratic leader.

These include classmates of Zayda Juniette Hernández, a 24-year-old chemical engineering student and one of the most outspoken leaders in the unexpected student movement — the biggest threat to the Ortega presidency since he was re-elected in 2007.

Just a few weeks ago, Hernández said she was returning back to school in Managua after playing tour guide for friends visiting colonial Nicaragua when she learned of classmates in a standoff with Nicaraguan security forces. “That morning, I never imagined I would end up at the door of my university throwing rocks to defend myself,” Hernandez said. “I was on my way home to clean my house, maybe workout and take a nap before returning to my daily life. And then I was confronted with this new reality.”

Hernández is joined by Victor Cuadras, 25, a chemical engineering student leader of the 19th of April Student Movement and Fernando Jose Sánchez, 20, a communication student, in Washington this week seeking the help of Trump and members of Congress to build international support.

“You have to understand we’re at the center, in the eye, of the hurricane,” said Victor Cuadras. “One that fills you with so much responsibility and plunges you in an emotional, existential crisis over life, but also that dumps on your shoulders a political, social and economic obligation.”

“Never. Never did I imagine I’d become an activist,” Sanchez said. “But this is about our country.”

The Trump administration has promised to take action, including sanctions, against the Nicaraguan government if it fails to properly address the concerns of the students and other civic groups about the increasing violence and political repression.

A senior administration official told McClatchy the United States is not directing the student’s efforts but supports their efforts. They also must be careful in how it shows its support given the Ortega’s past accusations of U.S. imperialism.

The students are meeting this week with, Ambassador Michael Kozak of the State Department’s Bureau of Democracy Human Rights, and Labor and USAID administrator Mark Green.

In an interview with McClatchy, Green said he was inspired by the students’ courage and passion to confront the brutality that, in his view, has cast a “dark cloud” over Nicaragua. Green said he’s particularly concerned by new allegations this week by the Nicaraguan government against civil society activists, such as Felix Maradiaga, director of the Institute of Economic Studies and Public Policies, and journalist Anibal Taruna, as well as the jailing of human rights defenders.

“I want to be careful, obviously, at this point, but as I told them we will not walk away from them,” Green said. “We need to stand with those who are standing up for things that we need to believe in.”

On Monday, the Secretary of State Mike Pompeo accused the Nicaraguan police and government controlled army who, he said, “have killed dozens, merely for peacefully protesting.”

During a Monday night reception with foreign ministers across the hemisphere, Vice President Mike Pence called on allies to unite against “the terrible violence” in Nicaragua. “The violence must end, and the violence must end now,” said the VP.

Hernández said that things are changing so fast for the group, for Nicaragua, that she can’t keep up.

“We don’t know what day it is? What time it is? We don’t know whether we’re going to be arrested when we return to Nicaragua,” Hernández said. “The only thing we know is that we’re waking up alive and are going to take advantage of every minute we can.”

Among a short, but strategically targeted list of requests that they believe are key to their success, the students want the Trump administration’s public, private and diplomatic support for new, independent presidential elections in Nicaragua by the end of the year.

Hernández said there are plenty moments where she is nervous, moments that she’s unsure of what will happen next, but she’s not scared.

“We have a huge responsibility. We have to deliver a message for the entire Nicaraguan community. It’s one of the biggest roles us as young people will undertake. But that’s what we’re doing.”

- Advertisement -
Paying the bills
Previous articleGranada, Nicaragua’s Main Tourist Destination In Chaos and Ruins Due to Clashes
Next articleMasaya Does Not Sleep and Does Not Want to Sleep

We are all mentally exhausted by sitting in our...
Investing In Costa Rica