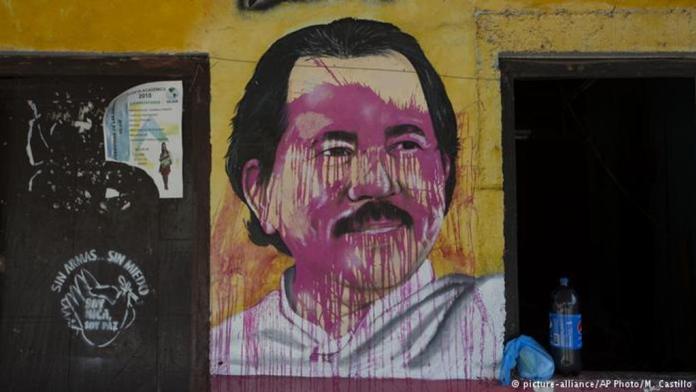 Amnesty International issued a report Tuesday detailing the Nicaraguan government’s deadly response to recent protests that almost 90 people, many of them students, protesting in anti-government demonstrations since April.

In “Shoot to Kill: Nicaragua’s Strategy to Repress Protest,” the human rights group documents the use of police force, alleged extrajudicial killings by armed, pro-government groups, and the repression and condemnation of news media since April 18, when violence against protesters began.

The report accuses Nicaraguan authorities of using paramilitary groups dubbed “Sandinista mobs” to quash anti-government protesters. “These pro-government armed groups were apparently used by the government to generate disorder, make threats and carry out attacks, including some that may have proved fatal.”

“The Nicaraguan authorities have turned on their own people in a vicious, sustained and frequently lethal assault on their rights to life, freedom of expression and peaceful assembly. The government of President Ortega has then shamelessly tried to cover up these atrocities, violating the victims’ rights to truth, justice and reparation”
Erika Guevara Rosas, Americas Director at Amnesty International

AI noted that attacks were often committed by “private individuals in the presence of or in coordination with the security forces.” The human rights organization said authorities failed to pursue perpetrators “after the crimes were committed.”

“The Nicaraguan authorities have turned on their own people in a vicious, sustained and frequently lethal assault on their rights to life, freedom of expression and peaceful assembly,” said Erika Guevara-Rosas, Americas director at Amnesty International. “The government of President Ortega has then shamelessly tried to cover up these atrocities, violating the victims’ rights to truth, justice, and reparation.”

At least 87 people have been killed and hundreds more wounded since protests erupted.

But the unrest has now gone beyond frustration over the government forced through pension and social security reforms (and then repealed them days later), with protesters calling for President Daniel Ortega and his wife and vice-president, Rosario Murillo, to step down.

Protesters also want Constitutional changes, mainly with respect to election rules made by Ortega to allow him a third consecutive term and many more after that.

Amnesty International’s report documents a system of repression that went further than attacking protesters by denying medical care in public hospitals, obstructing investigations of deaths and vilifying protesters in media by blaming them for the violence.

One protester who was denied medical care was 15-year-old Álvaro Conrado, who was shot in the neck while handing out water in Managua on April 20. The teen’s relatives told Amnesty International that he was denied medical attention at the government-run Cruz Azul Hospital before he was taken to a private hospital and died of his injuries. Conrado’s parents said he was buried without a forensic examination, that police prevented them from filing a complaint with a human rights center and unknown people destroyed his uncle’s food stall.

The human rights group recommended the Nicaraguan government guarantee free expression and stop using excessive police force against protesters. It also recommends the public prosecutor’s office and other law enforcement agencies initiate impartial and thorough investigations into the deaths and carry out due process.

On May 21, the Inter-American Commission on Human Rights (IACHR) called on the Ortega government to an immediate end to repression in Nicaragua and to allow investigations into the protest violence.

Ortega, a former Sandinista guerrilla fighter, has been president for the last 11 years, although he also ruled the country from 1979 to 1990, following his participation in the overthrowing of the Somoza dictatorship.

Ortega’s strategy to keep his autocratic hold on power in the country includes his style and brand of rhetoric while cosing up to the powerful private industry and trade with the United States.

Demonstrators have voiced frustrations over corruption by Ortega and Murillo, limited options to change the country’s politics in elections, and the president’s control over Congress, the courts, the military and the electoral authority.

The National Dialogue mediated by the Catholic Church aimed at calming the violence have stalled. On Sunday, the Episcopal Conference called for all sides to revive the dialogue.

Protests took another deadly turn on Monday, when pro-government groups and anti-government protesters clashed, leaving one person dead and three other people injured.

Electoral solution. Many see the only way for Ortega and Nicaragua is fresh elections. The division is strong that anyone who thinks a soltuion other than an electoral one is seriously wrong.

But the government has so far refused this option.