No Free Passes On The Ruta 27 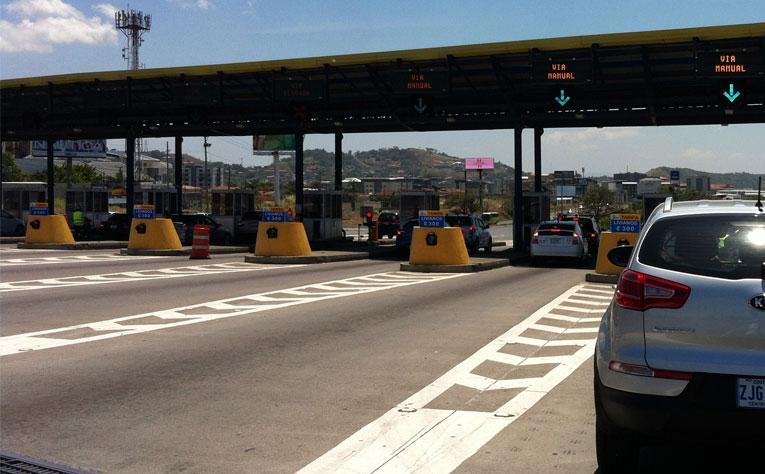 The Ruta 27 tolls at Escazu

TICO BULL – How many times has this happened to you, with no quickpass, you find yourself in a long line to pay the tolls on the Ruta 27. The worst is at Escazu.

And you ask yourself, why don’t they open (free) the tolls just like the do on the autopista General Cañas, near the airport, where the current standing order is that the tolls are free if the traffic queue is more than 300 metres?

The Ruta 27 is a public road on concession. The concessionaire is now called Globalvia Ruta 27. And clause 2.11 of the contract between Globalvia and the government agency regulation concession, the Consejo Nacional de Concesiones (CNC), states that “if it is found the queuing time (TEC) is over 8 minutes (…) the concessionaire shall permit the free passage of vehicles through the toll station until the congestion clears, and can resume charging when no longer there are vehicles in the collection lanes”.

In the report, for 2015, Globalvia found queuing times less than 8 minutes. Much less. Thus no free passes.

So, how is the TEC calculated?

The contract does not specify who regulates the concessionaire to comply with this specific clause of the contract and the TEC measurement. Thus, Globalvia measures the average and not the wait time during peak hours, the time when there is the greatest number of vehicles on the highway and through the tolls.

The CNC questions the TEC but seems powerless to do anything to its respect.

For example, around 5:00pm on weekdays, at the Escazu tolls, eastbound traffic at times has to stop at the toll booth because of congestion past the needles. Since the contract is ambiguous, Globavia can and does continue to charge tolls since the (average) queue time is less than eight minutes, no matter that in fact it can take more than that from the tolls to Walmart, a few hundred metres away.

In that scenario that is typical every weekday, how can it be that it takes more than 8 minutes to move a few hundred metres, but the queue time at tolls is not?

Similar situations occur at the tolls in La Guacima, Atenas and Pozon (Orotina) at various times. Once again, since the TEC is the average, it does not take into account times when vacationers are headed to the Pacific coast and their return.