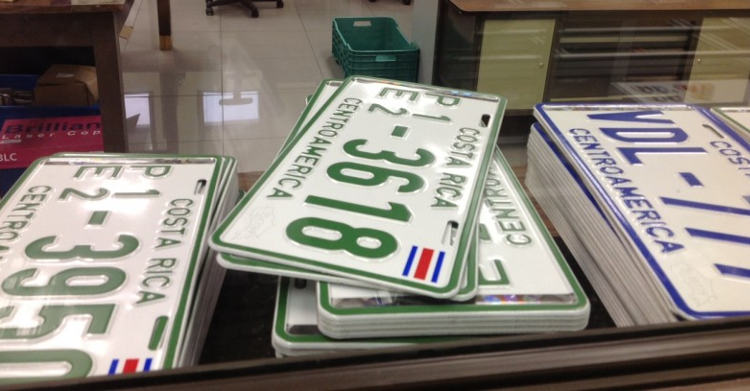 Here is a twist to the license plate changover that begins on Monday, what happens if a vehicle owner does not or refuses to switch to the new, more secure plates?

As of today, both the Registro Nacional (National Registry) and the Dirección de Policía de Tránsito (Traffic Police) have yet to define the type of penaly to be applied.

The director of the National Registry, Dagobert Sibaua, confirmed that the changeover begins next week (Monday July 15) for all the “old” license plates ending 1, three months later for plates ending in 2 and so on…every three month a new number, until the last quarter in 2015 with the number 0.

Under this plan, come October all vehicles ending with the number 1 must have the “new” plates. But what happens if a traffic official stops a vehicle still with the old plates?

Sibaja says the penalty will be based on the established traffic law (ley de Transito). However, the Ministerio de Obras Publicas y Transportes (MOPT) has yet to determine which article (of law) applies and what the penalty/fine would be.

According to the director of the traffic police, German Marín, the penalty can be established by several mechanisms. “We are looking forward to the word of the Registro, because they are in charge of the process (changeover)”, said Marín.

In other words, the director of traffic has no answer.

Approximately 250.000 vehicles have already made the switch voluntarily, either by requesting the new plates or replacing damaged or lost plates. Still to change their plates are more than 1 million vehicles.

The cost for the changeover is ¢15.000 colones for each set of plates.

Editor’s note: We have yet to get a response from the Registro of any plans to recycle the old plates. In the changeover there will more than 2 million single metal plates that will no longer be attached to vehicles. What will be of them?

Do you know anyone who handles stress really well?...
Rico's Digest