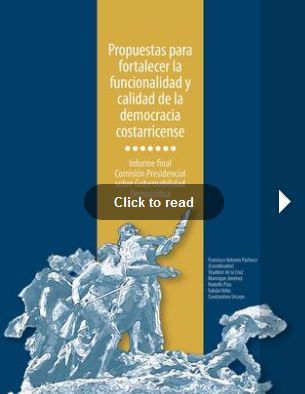 The elimination of the boards of directors of independent institutions and the closure of Consejo Nacional de Vialidad (Conavi), de Seguridad Vial (Cosevi) y de Transporte Público (CTP) – National Highway Council, Road Safety and Public Transit – are part of the administrative restructuring that the group of “notables” recommended in order to improve governance of Costa Rica. 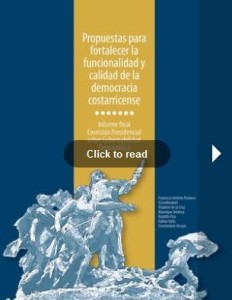 Communication minister, Francisco Chacon, said that a MOPT intervention is an issue that the Presidency has been working on and the reason it has not rejected the recommendation.

Although there was no consensus, the recommendation to remove the boards was included in the report.

For her part, presidenta Laura Chinchilla, promised a deadline of February 25 for her government to present bills based on the recommendations by the Notables panel.

Following the presentation at Casa Presidencial on Thursday, the Presidenta said that the plan is to include reforms that will “expedite legislative, as well as judicial and administrative procedures”.

Chinchilla added that it should also strenghten “accountability of public officials” as part of the seven priorities of her last year of government.

The President ruled out increasing the number of legislators, another recommendation by the Notables.

Minister Chacón assured that the government will be hiring lawyers to work on the proposals and will be discussing the “document” at the next cabinet meeting, on Tuesday. The minister also did not rule out a referendum to hasten the execution of the proposals.

Last week, the Finnish government made a bold decision....
National