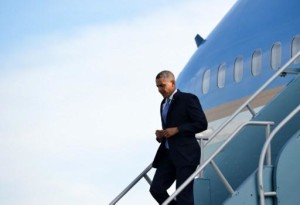 U.S. President Barack Obama is set to fly to Mexico and Costa Rica for diplomatic meetings on Thursday and Friday, which he will use to tout cross-border trade and the Senate’s pending immigration rewrite.

“Our relationship with the countries in Central America is vital … and it is certainly not limited at all to the matters of immigration reform in this country,” White House spokesman Jay Carney said Monday.

However, he added, “you can expect he’ll talk about it, because it’s very topical here in the United States, and it is of interest to countries in the region.”

“The trip will be an important chance to discuss our collective efforts to promote economic growth and development in Central America and our ongoing collaboration on citizen security,” Carney said. (“Citizen security” is the White House’s term for a series of regional law-enforcement programs.)

But the trip also underscores Obama’s efforts to bind Latino immigrants to the Democratic party. In November 2012, the president won 70 percent of the Latino vote — despite a lousy economy that saw a 44 percent loss of wealth  among Latino households — by repeatedly showing his support for Latino groups and redistribution policies aimed at the immigrant Latino population.

Obama’s chief campaign strategist, David Plouffe, said that the strongest group of supporters in 2012 for Obamacare were Latinos.

“The bigger problem [Republicans] have got with Latinos isn’t immigration. It’s their economic policies and health care,” he told the New York Times Magazine. “The group that supported the president’s health-care bill the most? Latinos.”

“This trip is an important opportunity to reinforce the deep cultural, familial and economic ties that so many Americans share with Mexico and Central America,” he said Friday.

On Monday, Obama met in the White House with a group of U.S. Latino advocates to discuss the pending trip. He told them that “immigration reform continues to be a top legislative priority this year,“ and that “he is looking forward to talking with Latin American leaders about our vision for the Americas as a region of shared opportunity,” said a White House statement.