On Google Maps : Android Bot Peeing On An Apple Logo 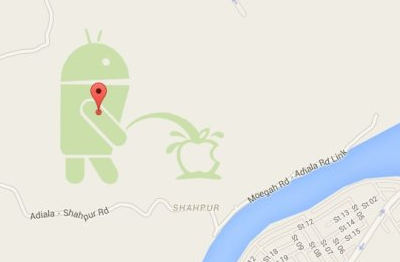 This is real and you can see it for yourself right here.

The misbehaving Bugdroid can still be seen on Google Maps right outside the Pakistani city of Rawalpindi in the bright green shade usually reserved for parks and forests.

A Google rep told Mashable the symbol isn’t one of the tech giant’s hidden Easter eggs (like the Pac-Man addition or the invasion of Pokémon last year) Rather, the logos were apparently added via the tool’s Map Maker, which allows any user to edit local maps.

“Even though edits are moderated, occasionally the odd inaccurate or cheeky edit may slip through our system,” the spokesperson told Mashable in a statement.

You’d better check it out now if you want to see it, because it might not be there for long.

“The vast majority of users who edit our maps provide great contributions, such as mapping places that have never been mapped before, or adding new business openings or address changes. We’re sorry for this inappropriate user-created content; we’re working to remove it quickly. We also learn from these issues, and we’re constantly improving how we detect, prevent and handle bad edits.”

This article appeared originally on Yatzu.com

QCOSTARICA - People who knew him remember him as...