One Dead, Another Wounded In Shooting Outside The Italian Embassy in San Jose

An Italian businessman and his companion were ambushed by two men on a motorcycle outside the Italian embassy in San Jose. He died in hospital, she still in critical condition.

NewsNationalSan Jose
By Rico
23 May 2018 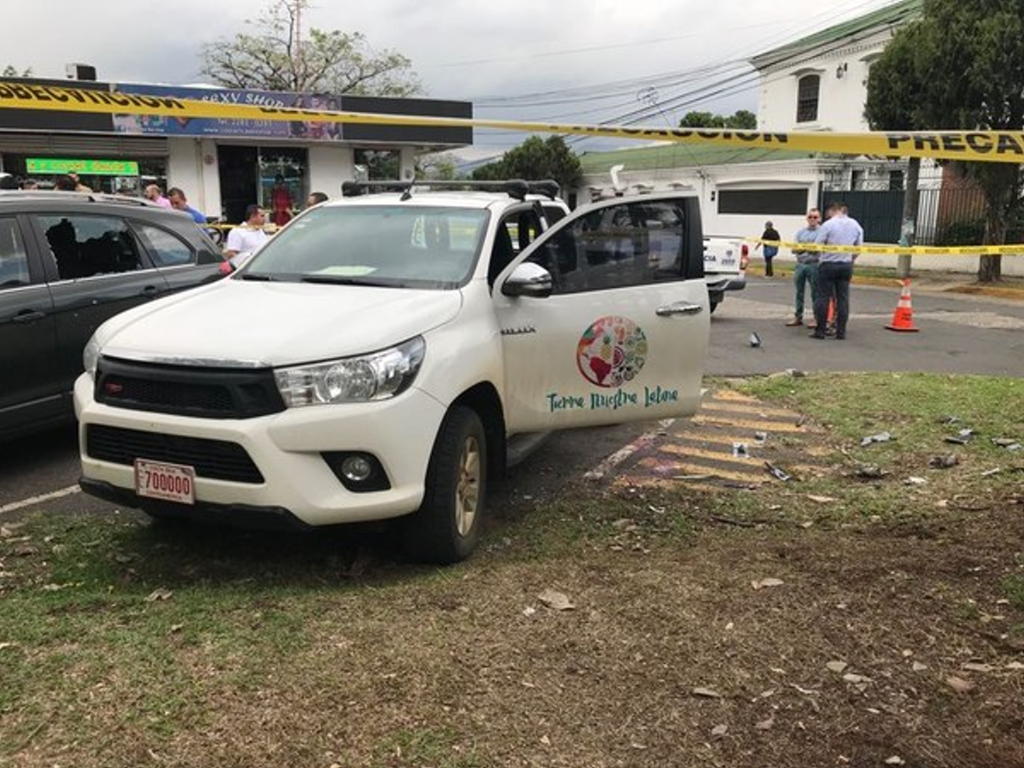 It was shortly before noon, the Italian and his Ecuadorian companion were coming out of the Italian embassy in Los Yoses, Monte de Oca (San Jose), when two men on a motorcycle opened fire on the couple were about to get into their parked car, on the public street near the embassy.

A witness who chose not to be identified said that he saw a man and a woman leave the diplomatic center and approach their vehicle when the two on the motorcycle shot them several times.

Another witness, also who asked for anonimity said the one of the men on the motorcycles wore a helmet, the other, in the back not; the motorcycle did not have license plates and the shooters kept shooting even though the male victim was on the ground.

They kept shooting him while he was on the ground!

The Italian was identified as Salvatore Ponzo, owner of the Tierra Nuestra Latina, a company that exported Costa Rican pineapples to Europe; the woman, her last names Lopez Toaquiza.

The pair were rushed to the nearby Hospital Calderón Guardia. Ponzo died shortly after arriving at the hospital, his injuries were too massive – hit at least six times – while Lopez continued surgery at press time.

According to information from a medical center source, the man had “multiple injuries to the liver, intestines and suffered a hypovolemic shock”.

Hypovolemic is an emergency condition in which severe blood or fluid loss makes the heart unable to pump enough blood to the body.

A consul of the Embassy who came out to see what had happened would not give a statement to the press. Shortly after agents from the Organismo de Investigación Judicial (OIJ) arrived at the scene, one of the agents accompanied the consul into the embassy.

According to Carolina Figueroa, dispatcher of the Cruz Roja (Red Cross), the call to 911 came 11:39 a.m. and they immediately sent three ambulances to the site where they found the wounded with multiple impacts on various parts of their bodies.

Daniel Calderón, General Director of the Fuerza Publica (national police) in San José, said the motorcycle was spotted in Desamparados, where the special units were deployed and after an intense search came up empty-handed.

The motive for the attack is yet unclear.

Ponzo, 38 years of age, was in Costa Rica once a month to check on his business that he started in 2015, exporting golden pineapple and other fruits. An employee of the company located in Pital de San Carlos, in the northern zone, said her boss was at the embassy to update his papers, he came to Costa Rica every four weeks, living most of his time in Italy and Spain.

A friend is the main suspect to have killed Vincenzo Costanzo,...
Read more

Q24N - The recent summit of the Community of...
Alajuela