Pedro Castro’s days as Transport Minister appear numbered. His adovcacy of a “ruining” contract, his performance as “representative” to the concessionaire and his “conflict of interest” of having worked with several companies that later became State, are some of the reasons that might lead Presidenta Laura Chinchilla to do “damage control”.

The Presidenta has been doing some side peddling after staunchily supporting the concession contract for the San José – San Ramón road reconstruction and backing the work of her Transport Minister.

Lowering the tolls, offering up the contract to a commission for analysis and saying through her Communications Minister that the government does not rule out the rescinding of the contract, may just be missing one key element in the damage control: the removal of Castro.

Communications Minister, Franisco Chacon – a post similar to a White House Press Secretary – revealed this week that the government will be spending an additional ¢160 million colones to improve the Administration’s image, meaning the image of the Presidenta and her remaining term, wich many view as a futile effort.

The concession contract, a 30 year concession with a cost of US$530 million dollars, has become a political hot potatoe that, well, they only way out for the Presidenta is cutting her minister loose and succumbing to the opposition.

For doña Laura, the current controversy could make her a lame duck president until her term expires May  2014. The series of controversies and allegations of impropriaties – not necessarily hers, but by her underlings – may render her totally powerless to govern a country that, in the words of former president Oscar Arias, “is ungovernable”. 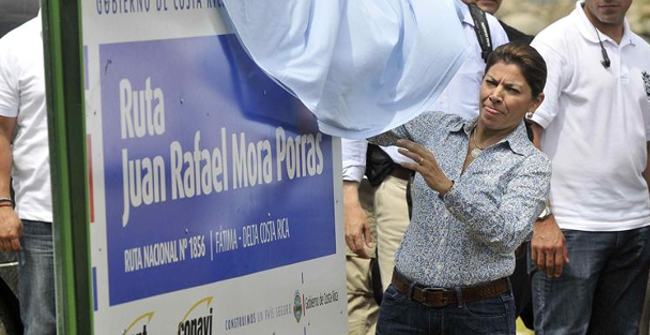 The Presidenta has had to deal with the major corruption scandal of the northern border road with Nicaragua, “La Trocha”, the fallout from a 2010 incident over a historical territory in dispute between Nicaragua and Costa Rica continues to be a compass of relations between the administrations of Costa Rican president Laura Chinchilla and Nicaragua’s Daniel Ortega.

The hits that the Presidenta has taken include last year removing then Transport Minister,  Francisco Jiménez, forced out over another corruption scandal that included the theft of firearms from a MOPT warehouse. And much more. During her term to date, 13 of Chinchilla’s 23 ministers have left their posts.

Public confidence in the Presidenta has continued to decline after beginning her presidency in May 2010 with a strong mandate and clear policy priorities to strengthen environmental protections, security, and family welfare. While she initially enjoyed strong public approval, by July 2011, public confidence in her administration eventually fell due to corruption scandals and the faltering economy. By September 2012, one poll revealed that Chinchilla had the lowest approval rating in the hemisphere – 13 percent.

It is understatement to say the Presidenta has been having some rough times.  But, this is politics and in Costa Rica politics the focus of the people’s favour – or disfavour – is just another headline away.

I wouldn’t give up the Presidenta just yet!