Original Contractor of Stadium Fireworks Show Had Backed Out of Contract 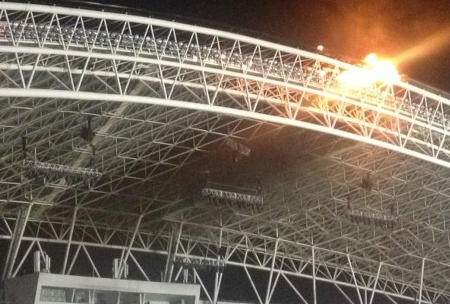 Fuegos Artificiales Cavica, S.A, was the company awarded the original contract for the fireworks display for the opening of the Juegos Centroamericanos (Cental American Games) Sunday night at the national stadium, backing out of the contract three weeks feeling the permit granted by the Ministrio de Salud was “irregular”.

The company’s general manager, Carlos Villavicencio, spoke to the press on Monday, saying that the company withdrew from the contract for fear that the distances allowed “were too close”.

Fuegos Artificiales Cavica ran into a similar experience during the Zapote fair last December, explained Villavicencio, when the ministerio de Salud refused to issue it a permit because their plan breached the safety gap between powder and public.

Villavicencio explained that the distances for Sunday’s show were shorter than that requested by the Ministerio de Salud in Zapote only a couple of months back.

For her part, the head of the regional office of Salud, Silvia Herrera, said “all the permits are in order and met the necessary regulations”.

Whatever, San José mayor, Johnny Araya and the secretary of the games organinizing committe, Jorge Villalobos,  ordered an investigation, especially following the comments by Fire Chief, Hector Chavez, who said the fire was “caused by carelessness”.

The stadium does not have a fire insurance policy.

The company, Fuegos Artificiales Internacionales Custodio Calvo, S.A. (FAISA) was responsible for the fireworks display and now may be responsible for the damage, as the preliminary investigation reveals the company did not implement the original plan for the show called “Pura vida”.