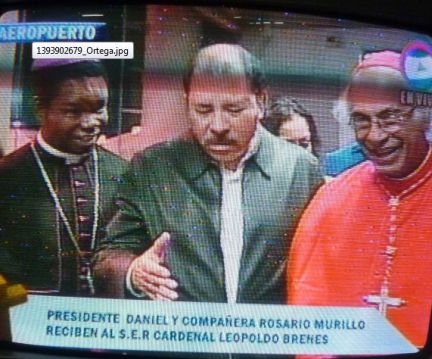 (TODAY NICARAGUA) The death of Nicaragua’s president Daniel Ortega were exaggerated. The social media was abuzz on Monday on the possible death of the Sandinista leader, after his absence from public view for the last ten days.

But late last night, all the rumours were quietened, when Ortega met at the Managua airport Roman Cathloic Cardinal Leopoldo Brenes, who arrived back from Rome.

“You performed the miracle of resurrecting because, for many, I was dead”, Ortega told the recently named Cardinal. Ortega greeted Brenes at the Managua International airport, accompanied by his wife, Rosario Murillo, with a smile and firm handshake.

Brenes, 64, arrived in his purple cassock of a new Cardinal, shared details of his trip with Ortega and in front of the television cameras and thousand of young Sandinistas who came out to greet the Cardinal, before heading off in a Willys 1940 Jeep, parishoners nicknamed “Carinal Mobile”.

“We have to leave for Venezuela to participate in the anniversary of the death of Hugo Chavez”, said Ortega after greeting Brenes.

Ortega is expected to participate in the civic-military parade that the Nicolas Maduro governemnt will hold on Wedenesday to mark the death of Chavez, amid protests shaking the South American nation for the past month.

Venezuela is Nicaragua’s second major trading partner since 2007 when Ortega was back in the presidency.

No explanation was offered over Ortega’s absence from public view.

QCOSTARICA - The party for 200 years of independent...
Front Page