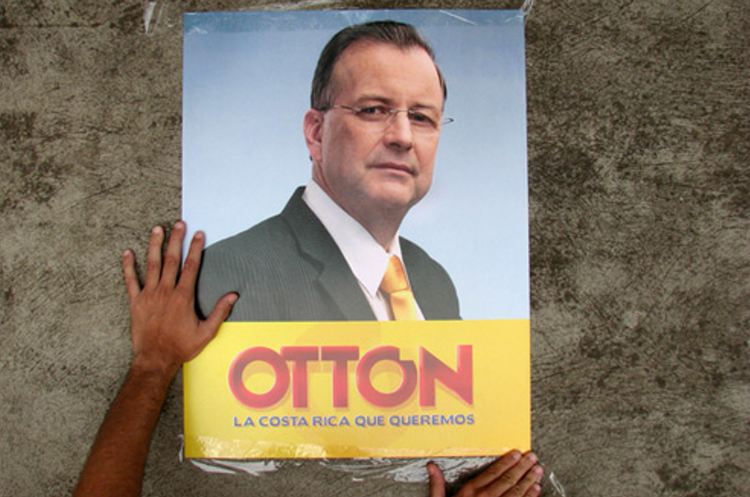 One of the burdens a candidate for President must bear is a statement from a congressman of his party that seems to draw into doubt his future Presidential policy. But the discomfort of presidential candidate Luis Guillermo Solis was made more pointed by the fact that the source of the quote is from a founder of the party itself.

Such was the case of the Partido Accion Cuidadana (PAC) – Citizen Action Party –  candidate when the American-Costa Rican Chamber of Commerce (Amcham) representing a powerful group of the business community questioned a statement made during last week by the elder Solis that he would delve deeply into the contract for the new port at Limon.

To show their seriousness, Amcham put their disquuiet in writing. “Last week, Ottón Solis declared in Limon that he would probe deeply into the APM contract to see how the contract reads,” said Amcham president Humberto Pacheco. APM is the concessionaire of the gigantic container port under construction.

No doubt the statement that Ottón Solis allegedly made would have been a crowd-pleaser, especially with the dock workers’ union that has opposed the contract from the beginning and has gone to court over it, only to lose. Still, the multimillion dollar dock is dear to the hearts of the business community.

Among businessmen, it is one of the few victories by the hapless Chinchilla Administration. The longshoremen’s union opposes it because they would like to enlarge the old port of Limon, which they now largely control. Such control would be unlikely at a privately-operated port facility.

Amcham’s board of directors met Monday in troubled session. “Everyone is uneasy to know what the philosophy of a future Administration of Luis Guillermo,” added Pacheco, “We believe the candidate is very good, but we’re worried about the extremist wing in PAC that at this level seems to contradict its candidate…”

PAC is a left of center party — but not so far left as Broad Front or its candidate. After ex-President Oscar Arias dragged National Liberation Party to the center and promoted the CAFTA free trade agreement with the United States, PAC spent a whole term fighting a scorched earth legislative battle against the treaty.

Before entering into the meeting with Amcham Monday, Solis made one of those statements politicians under pressure make, stating that in any party there are different points of view but that he did not consider these in PAC as being contradictions. (Say what?)

While Ottón tends to be hard line and suspicious of foreign investment and especially the influence of the United States, Luis Guillermo is regarded as being a moderate or at least a pragmatist — except where corruption is involved where he shares his party founder’s revulsion.

To illustrate Amcham’s power, it represents, according to Pacheco, 80% of foreign investment and 75% of the country’s exports. But Amcham Monday afternoon questioned the candidate closely about his position on taxation of foreign companies investing here.

Again this is one of those sore points where congressman-elect Otton Solis tends to be harsh while the Presidential candidate tends to be lenient. It poses the uncomfortable possibility for PAC of a behind-the-scenes struggle between Deputy Solis and President Solis.

The styles of the two Solis’s also differ — Ottón Solis tends to be prickly and abrasive while Luis Guillermo Solis is smoother and seems more likely to listen. In the past, as president of his party, Solis has caused some deputies to withdraw from the party after being castigated for veering from the party line.

Update: Candidate Solis met with the businessmen Tuesday afternoon and appparently reassured them that he considers the APM contract with the government “the law of the land” and a done deal. This, of course, leaves him the unenviable task of keeeping an unrepentan deputy-elect Solis out of the policy.

This will not be easy. The bespectacled, studious-looking lawmaker-elect may look mild but he is a stubborn fighter, as he showed when leading a three[year-long scorched earh fight against CAFTA in the 2006-10 Legislative Assembly.

- Advertisement -
Paying the bills
Previous articleUnbelievable: Only 80% Of Police Communications in Costa Rica Are Encrypted
Next articleCosta Rica Has Something For Everyone