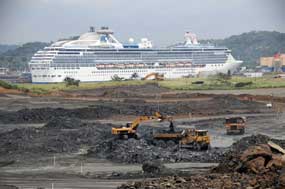 The United Group for the Canal (GUPC) has suspended expansion works due to a breakdown of the dialogue regarding a $1.6 billion USD claim.

The administrator of the Panama Canal Authority (PCA), Jorge Quijano, said in a news conference today that resolving the crisis has not been possible, because the GUPC has had an inflexible position and has maintained non-sustainable figures that are impossible to fulfill due to their magnitude.

Quijano stated that the PCA did its best to move negotiations out of stagnation, and accepted a protocol to expand negotiations, but it was impossible to achieve anything.

He added that the dialogue remains confidential, but the distance between the parties is very large, because the claims threaten the Canal’s interests and the $1.6 billion USD demand remains unchanged, he added.

Quijano said that during the talks, leadership passed from Spain’s Sacyr company to Italy’s Impregilo, which along with Belgium’s Jan de Nul and Panama’s Cusa make up the GUPC consortium.

The most important thing is that the PCA is in a condition to complete the project in 2015 with or without the GUPC, and for that it will use the same workers the company has fired.

QCOSTARICA - Bianca Jagger, who was the first wife...
Health