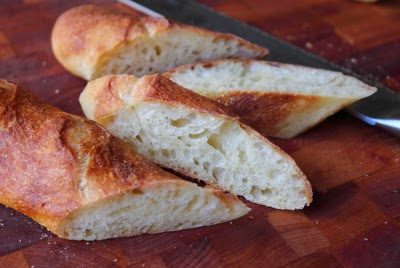 COSTA RICA EXTRA (via Foodwishes.com) – Whenever someone asked me why I hadn’t done a baguette video yet, I’d tell them because you just can’t recreate an authentic loaf of French bread at home.

I’d explain about the water, the flour, the centuries old starters, and the steam-injected ovens. I told them what I’d been told; that it was simply impossible, or as the French say, “impossible!”

That was, until I actually tried to make some. Much to my amazement, not only was it possible, it was really pretty simple. The key is water. That goes for the dough, and the baking environment. The dough must be very sticky, as in hard-to-work-with sticky. This is nothing well-floured fingers can’t conquer, but I did want to give you a heads-up.

Besides the water content in the dough, the oven must also be moist. This humidity, in addition to some occasional misting will give the crusty baguettes their signature look. How does this work? You know how when someone pours water on the rocks in a dry sauna, and suddenly it feels way hotter? It probably has something to do with that.

Anyway, who cares why it works, the important thing here is that real, authentic, freshly-baked baguette is now an everyday reality. One thing worth noting; I adapted this no-knead version from a recipe I found here last year. The original is in metric, so I’ve converted it, but also included the original flour and water units in case you want to get it exact. I hope you give this easy, and so not impossible baguette recipe a try soon. Enjoy!

For 4 smaller or 2 large baguette:

– Mix dough and let rise 12-14 hours or until doubled
– Punch down and shape loaves, let rise covered with floured plastic 1 to 1 1/2 hr or until almost doubled
– Bake at 550 F. about 15 minutes or until well-browned
– Spray with water before baking, at 5 minutes, and at 10 minutes during cooking time